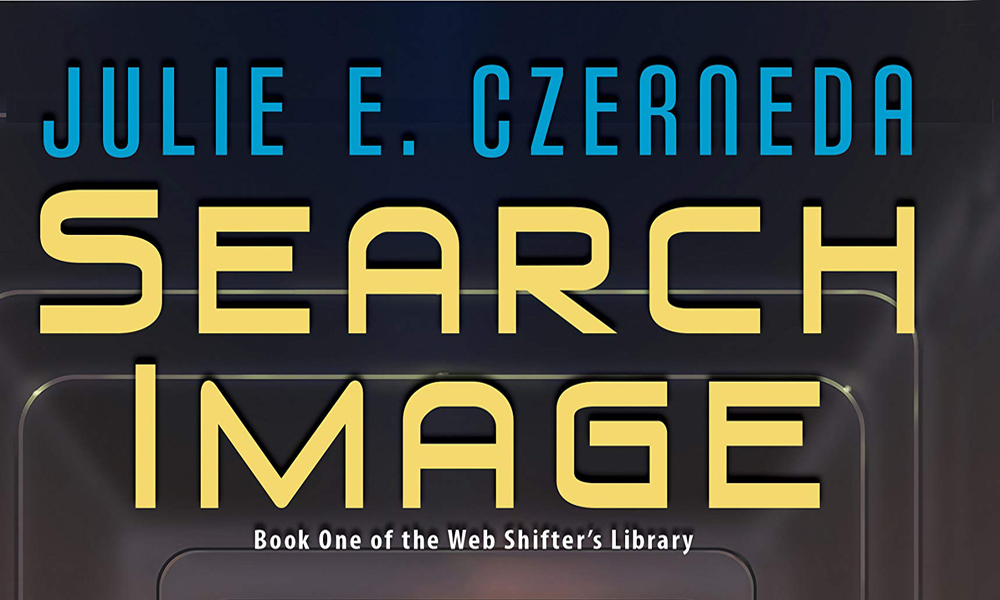 Search Image is the first book in the Web Shifter’s Library series. While I haven’t read the other books featuring Esen, this one was enough to make me regret that oversight. 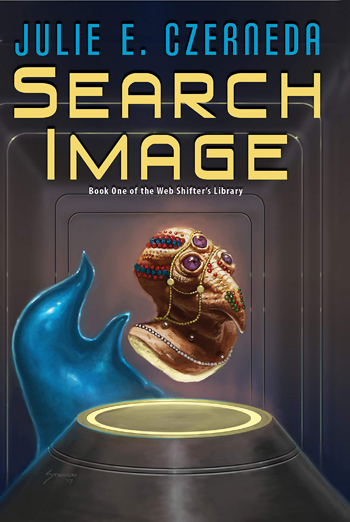 Esen, a sentient blob who carries the genetic memory of many races, and her human partner Paul Ragem, run the All Species’ Library of Linguistics and Culture on a planet that is by turns welcoming and bewildered by them. Throughout the story they have to deal with unexpected transformations, attacks on the Library, family dramas and attempting to save a species from complete annihilation.

There’s a lot in these books, in regards to both plot and characters. Not only are there several fixtures of the Library, who I assume were in previous books, but new friends and foes, and occasionally beings that fall somewhere in between.

The plot points are various and many, and yet somehow they manage to mostly tie in together. It’s not often that so many different threads of plots can come together so neatly, and tie into each other so often as they do here. Occasionally this leads to a piece feeling a bit rushed. Some of these plot parts could easily have been stretched to their own books. But the speed, for the most part, feels organic, simply pulling along the reader to the next crisis in a very entertaining rush.

Slightly less successful, at least for me, was the way the internal dialogue was written. Italics and bolded lines are used often, mainly to denote personal asides. At times there were very entertaining, and they do a great job showing the internal conflicts, feelings and perspectives of the point of view character. Most of the time this is Esen, but sometimes others.

Unfortunately, these design choices are also used for things that aren’t strictly internal dialogue. When that happens it can be a bit confusing. Similarly, the voice of the character is done in a normal voice – with sentence fragments scattered all about. Sometimes this is good. I definitely haven’t read another book with such a strong sense of the character’s voice in a long time. But it’s also hard to get into the rhythm of the story, and sometimes trying to figure out what these sentence fragments mean bogs down the flow and pulls me out of the story.

One thing I thought would be confusing, but wasn’t, is the sheer number of different species in this book. The world feels crowded full of different alien peoples, each somehow distinct, even with such scant details about each one. The author doesn’t hold the reader’s hand here. Names are often dropped with a minor detail, and then the story pushes on, expecting the reader to keep up. And somehow it comes across as confident rather than confusing.

I also really liked the broad range of tone here. While most of the book is humorous, especially looking at the world through Esen’s youthful and energetic perspective, there were moments toward the end that were genuinely touching. The characters have to learn some hard lessons, and for a light hearted book, the sincerity was truly affecting. The themes about family and relationships were genuinely sweet, which was unexpected and delightful.

If you’ve never read any others by this author, don’t be afraid to jump in here. I’m sure there are things I missed. But this works nicely as a stand alone novel as well. The key information is related without it getting exposition heavy, and I didn’t feel lost because of not having read the others. If you’re looking for a fun story with a lot of heart and a densely packed plot, this is a good one to pick up. I’m looking forward to reading what I missed in the earlier books.