It’s the question every storyteller needs to ask but never wants to. Who would want to watch my movie and why? 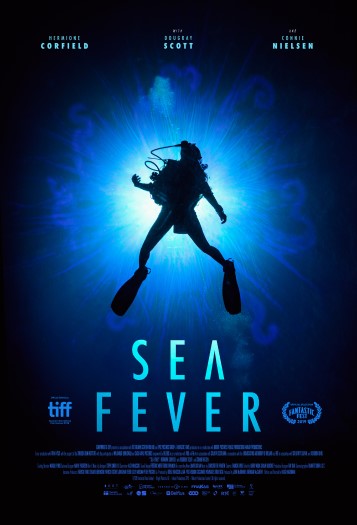 Sea Fever has a bunch of ideas from a variety of genres mingled up into an uneasy slurry.

It has the slow-burn pacing of a relationship drama for a majority of the opening scenes. Then without warning the gears shifts about halfway through to a budget remake of John Carpenter’s The Thing. I figured with all the meandering scenes as an introduction the ‘fever’ of the title would be something psychological or grounded. I was genuinely surprised when gore and creature effects started popping up in what I could have easily assumed to be some kind of Irish soap opera about struggling workers on a boat. I realize when half your script is cribbed from a cult classic down to a testing montage and fiery finale you need to do something to distinguish your production, but some genres don’t play well together. A musical comedy and a realistic war film would not work well, and similarly a sluggish pageant of personal woes is a bizarre accompaniment to exploding infected body parts.

And therein lies the major issue with Sea Fever. It’s too drawn out and at times boring to be effective as a monster movie and it’s too ridiculous to satisfy someone looking for a genuine melodrama. The actors are okay and this might be a cross-cultural issue but I never quite bought their emotions at any given time. For much of the film every character under-reacted to everything they encountered, lazily touching unknown goo and seeming only mildly surprised by glowing tentacles.

At other points they were hyper-emotive to the point of mania, flying off the handle to do the dumbest things in blind panic. I realize this may be somewhat realistic to human behavior in times of stress, but if I’m going to care about the cast there should ideally be some consistency. If someone is going to be doing everything they can to destroy something…and then flip flop to risk everything to save the same thing in the space of a couple of minutes I’m not buying these characters as mentally stable. Everyone from the lovers to the curmudgeonly owner of the boat to the cantankerous shipmate…you’ve seen them all before and you already know their fates as soon as you recognize the signposts of an isolated horror film. A lot of this you’ve seen before and much of the runtime of Sea Fever is trying to justify its own existence over making any kind of statement or attempt at unique entertainment.

Without a central core of interest even a tension-filled vessel of doom becomes about as interesting as people waiting at a bus stop.

The creature effects are nice, even the computer animated ones which manage mostly to be unobtrusive. The actors as mentioned are likable even if their characters are not.
But even the premise of the monster being scary is second-guessed by a script that can’t seem to make up it’s mind once.

If you don’t mind a familiar experience in which every sequence may not be connected but still loudly designed to make you FEEL…as long as you don’t think much, this is at least a competently designed rehash of a hoary concept with just a sprinkling of pretentiousness to make it feel like a student film crashed into a late night creature feature.
Intriguing at times, but largely forgettable and ultimately unsatisfying.