A scrawl is defined as meandering, hurried and careless writing.
It may have been an intentional decision on the part of the director for the entire film to embody this concept, but then again it might not have been. 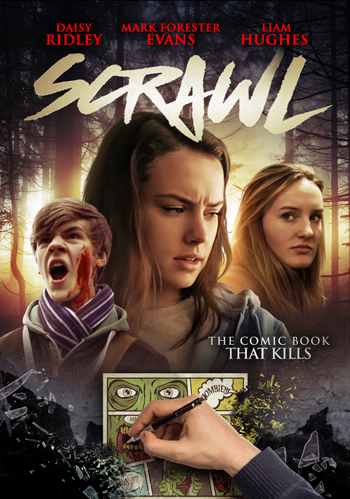 From the opening dark humor non-sequitur to the often over-the-top acting and the never-steady camera with lightning fast cuts every few seconds, Scrawl feels collectively disorienting, confused, obscure, and more than a little amateur. A low budget production does not have to feel shoddy, but the other obstacle to being immersed in Scrawl besides its willful ambiguity is the sloppy presentation.

The artwork of a central comic is stylish, but it’s hardly the masterpiece every character seems convinced it is. This issue is compounded when people seem capable of understanding the plot of the comic immediately after flickering through the pages, even though there are few dialogue balloons and the format seems all over the place. Like the comic, this film feels like it’s resting on a foundation which doesn’t exist. In media res is one thing, but Scrawl flat out refuses at times to present a cohesive plot of defined characterization. People make remarks in a meaningful way that make no sense.

They have relationships they understand but the audience never does. I like experimentation as much as the next person, but if this was meant to be a David Lynch style dream logic story maybe it could have picked a tone. Ordinarily the weirder the subtext, the more mundane the central concept so that the oddness feels purposeful, ‘magical realism’, instead of the entire production being weird ideas with a weird presentation. Scrawl has a fairly simple horror movie premise and even somewhat cliched character backstories, but you’d hardly even know this unless you read a synopsis.

It felt like if Nightmare of Elm Street if every character delivered their stilted lines like stage performers, flashbacks occurred almost at random and without context, and Freddy’s motivations were never explored, his powers never fully explained. It’s so very nearly compelling it’s ultimately quite frustrating.

There are glimmers of…something here. Older actors give creepy performances. It’s all deucedly English with apartment flats, European scout uniforms, and regional accents and colloquialisms galore. There’s a tantalizing mystery buried deep. If only the effects had been slightly more convincing, the directing less shaky, the writing less forced. Even Daisy Ridley is hardly a revelation.

“Can someone tell me please what’s going on?” a character screams towards the middle of the film.
It summed up my own feelings very succinctly.