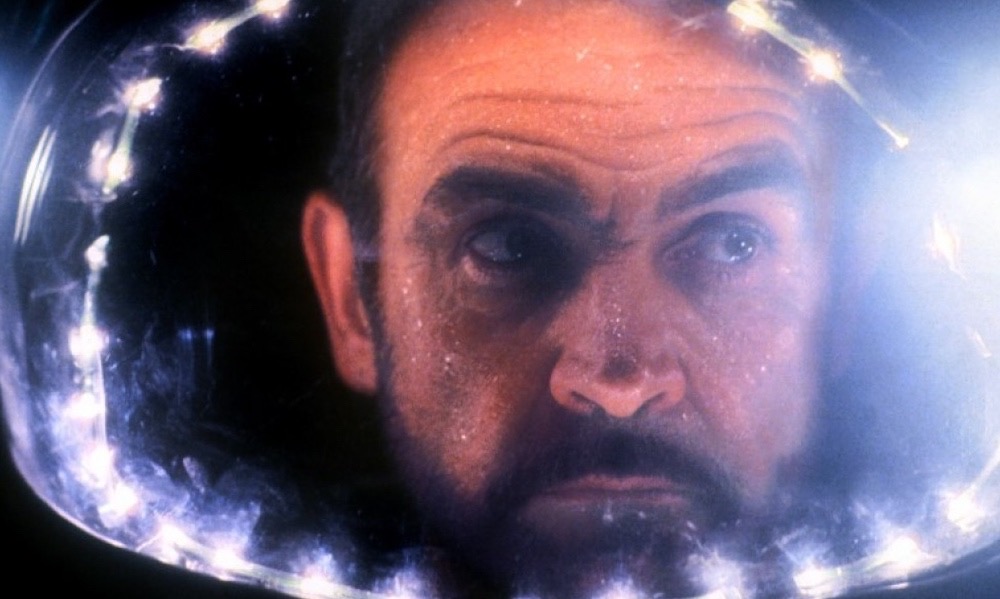 Genre fans are familiar with the similarity between this film’s narrative and that of the classic western High Noon (1952) in which a town’s Marshal has to face a gang of professional killers on his own.

One of the best known and well thought of 80’s science fiction classics, this British production was written and directed by Peter Hyams.

Outland takes place in a future where humanity has established outer space, at least the solar system, as its backyard, and space travel as an everyday event. The film’s narrative takes place on Jupiter’s moon Io where a mining colony run by a corporate entity named Conglomerates Amalgamated has been established to harvest titanium from the harsh environment.

The story begins as a new Federal Marshal William O’Neil (Sean Connery) is starting his tour of duty at the outpost. With the help of a small staff, he is responsible for keeping law and order in the place depicted as a crowded, claustrophobic, sweaty and cramped space. Not exactly a desirable situation to be in, or place to live. The mining staff is mostly men and the company hookers that are there for their enjoyment and entertainment. There is a bar of course, but the place overall gets depicted as primarily utilitarian, pragmatic in design, and industrial in appearance. Living quarters seem to range from small pod-like sleeping quarters, and dormitory-like setups with bunks to small cabins such as you might find on a ship. The mining colony itself becomes one of the film’s main characters.

Shortly after the movie begins, O’Neil’s wife leaves him, taking their son, to return to earth. She has had enough of living in places like this and wants their son to have a childhood more resembling what she considers normal. His situation serves to humanize the marshal and as context for what follows as the story develops.

Other principal characters are also soon introduced in this simple story that makes no pretense at being more than it is, a straightforward story that gets right to the point. Other characters that play roles crucial to the narrative are  Dr. Lazarus (Frances Sternhagen) the outpost’s amusingly grouchy doctor, a familiar western trope. Sgt. Montone (James B. Sikking), another Marshal and part of O’Neil’s staff, Mark Sheppard (Peter Boyle), the general manager of the outpost, and Sgt. Ballard (Clarke Peters) anther Marshal and part of O’Neil’s staff that gets promoted after Montone meets a sudden and unpleasant end.

As O’Neil begins his tour of duty Outland depicts people dying in bizarre ways, ways interpreted as suicide. Not that unusual given the unpleasant circumstances they live in on Io. O’Neil soon discovers the number of these occurrences has skyrocketed recently and finds out the reason is drugs someone is smuggling in and selling to the miners. It is a form of amphetamines that can cause hallucinations and psychosis. It soon becomes evident the motive behind this is greed, and the sociopath behind it all is Sheppard, who has a system in place to cover up the cause of the deaths, he is only interested in increasing production of his outpost no matter what the cost in lives.

O’Neil is too stubborn to accept things as they are, roll over and take the payoff and play along while ignoring the deaths of the miners. By way of an explanation to the doctor, he says he has something to prove to himself that he needs to know if it is true, that boils down to “a man’s gotta do what a man’s gotta do.” After O’Neil busts one of the drug dealing partners and confiscates the drugs, he is targeted by Sheppard as a problem, and the GM calls his suppliers and requests a pair of professional killers to fly in and take care of the job.

This part of the movie depicts the period of waiting for the shuttle with the hired killers aboard to arrive; a digital clock counts down the hours and minutes, a device that works pretty well in building tension and suspense while O’Neil, and we the audience, wait for the showdown to occur. The fix is in, and no one, including his staff, is willing to help the Marshal in this situation. He finds himself alone to deal with his impending scheduled demise, until the last minute when the grouchy doctor decides she will help if she can, which turns out to be a lot.

The moment arrives, and the hapless Marshal through trickery and pure dumb luck survives and kills the hitmen in a showdown that takes him outside the structure of the outpost’s compound with Jupiter and outer space as a backdrop. It appears all is well until Ballard suddenly arrives, showing his true colors as Sheppard’s confederate and inside man by attempting to kill O’Neil himself. After a dramatic struggle outside the compound between the two, O’Neil triumphs and manages to foil this final attempt on his life. He returns inside, approaches Sheppard and knocks him out as a last gesture of defiance. The film ends with O’Neil messaging his wife and telling her he will be joining her and his son for the trip back to earth.

Revisiting this film, the story the film portrays is so simple it is somewhat surprising it has achieved the status it enjoys as a science fiction classic. The narrative is only sparsely sprinkled with dramatic moments and doesn’t have that much in the way of exciting developments. True, the opening death scenes of the miners are somewhat memorable and sensational, but other than that the film is not that remarkable. Outland serves well as a vehicle for Connery as O’Neil and Frances Sternhagen as Doctor Lazarus. Her character represents a traditional science fiction (and frontier western) cliche similar to Star Trek‘s Dr. McCoy. The actress is enjoyable in her role as the cranky, pragmatic doctor, who has given up on the idea of her life having any meaning, beyond doing her job and getting drunk.

It’s almost as if the film’s creators were so smitten with the sets and models that represent the mining outpost, and they forgot to develop the characters that drive the story. The plot is a  grim and violent fairytale with a happy ending that contrasts sharply with the story it tells. With a little more mystery left as the story builds, instead of giving the whole thing away in the beginning, and more character development, this could have been a great movie along the lines of the Maltese Falcon (1941). Even so, the film is still one of the best British science fiction films I can recall.