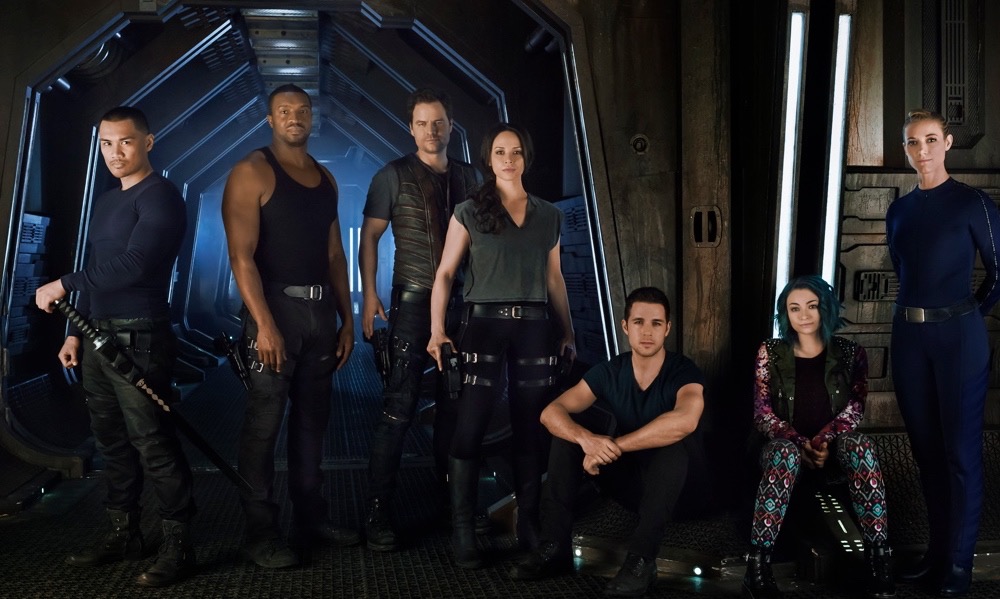 From comics based series to cyberpunk to good old fashioned outer-space adventure these shows are my picks for this year’s best examples of genre TV.

Are we in a new golden age of genre television? Some things that have changed over the course of this year might indicate the answer is yes. Comics based series have proliferated on the small screen over the last couple of years, and now even the somewhat infamous Syfy, along with  some other networks, have begun to demonstrate a  renewed interest in scripted science fiction/genre series.

I find it interesting that some of my favorite  new genre shows are summer fill-ins to help bridge the vacuum left by the recessed regular season, and seem more like a lucky break for us fans while we wait for stronger evidence of commitment in current TV programming. As a fan I feel fortunate any time I can tune in to a regular show that provides relief for my need for genre storytelling. There are some things I sometimes prefer about TV over movies, I enjoy serialized storytelling for several reasons, fuller development of story and characters for one, and the fact I don’t have to wait two years or longer for the next episode is another. I sometimes think the mini-series is the perfect format for telling science fiction and fantasy stories.

Not every genre series on TV is listed here but some, I feel deserve an honorable mention. Shows that I felt showed promise, but didn’t quite hit the target in terms of their depiction of the concepts they were attempting to tell story-wise. Killjoys is a good example of what I mean here. A strong concept that  seemed to hold a lot of promise, but that I felt fell short of achieving its goal, and never really engaged my interest as well as I felt it should and could. Limitless is another, I enjoy the humorous take on the story about the drug that unlocks the potential of the human brain. The humor that makes the show appealing is also what makes it difficult to take the show seriously as a science fiction series.

Another series that deserves mention is the eight episode long Britsh/American adult drama science fiction series Humans, that aired on AMC between June and August of this year. A more cerebral approach to a sci-fi show than most mainstream genre productions, it was another discussion about AI, a popular subject in science fiction this year that became almost common place. The story is about the near future and what are called synths. Life-like androids that have become popular  in use by humans. A small group of these androids have achieved true AI, and attempt to elude discovery by people. The series focuses a lot on the human reaction to these  synths in general and is not a flattering portrait of humanity, until towards the end when the better part of human nature begins to emerge. An Intelligent and worthwhile series, that some fans might find dull for its lack of action, and emphasis on discussion.

Both Daredevil and Jessica Jones were quite good series that I enjoyed a great deal, and also considered as candidates for my picks, but I decided that since they were deliberately presented so much more as violent action crime dramas only slightly flavored with some elements of fantasy, that, even though technically speaking they are genre series, they don’t belong on this list and should remain categorized as crime dramas.

The shows on the list are all great to excellent in my view. Some more consistently than others, but all are deserving in recognition for the enjoyment, entertainment, and fun they visit on my life with their weekly occurrences.

Arrow has proven to be a consistently good substitute for the series we all wish we could watch on TV: Batman. The show’s creators were smart enough to fashion  the series in many ways along the same lines as Nolan’s more grounded take on the dark vigilantes adventures, even up to the point of borrowing some of Bat’s foes from the DC Universe. A well-done action, adventure, and mystery series with some of the best fight scenes  ever done on tv.The somewhat corny and melodramatic dialogue is in keeping with its comic-based roots.

As well as the dark side of the DC universe is done on Arrow, the lighter side is equally well done on The Flash. I admit I had some doubts when they announced this companion series to the archer’s adventures, but the show has put my doubts to rest by consistently providing an amusing and entertaining series complete with some of the DC universe’s best from the rogue’s gallery, including a pretty darn good depiction of Grodd the telepathic ape. A little more tongue in cheek than Arrow, but just as enjoyable.

Legends of Tomorrow hasn’t aired yet, but looks very promising with Vandal Savage as the villain. They had me hooked when they showed the giant robot foot depicted crashing through the roof in the series trailer. A bit more ambitious than the shows it has sprung from this ensemble series looks like it will be a welcome addition to my genre tv viewing. The 16 episode first season premiers on January 21, 2016.

This series has risen near the top of the shows on my weekly do-not-miss list of genre TV. With the macabre fascination of a very creepy and unsavory carnival sideshow, this dark, grim, more grounded and violent take on Commissioner Gordon’s early days on the Gotham police force is another surrogate substitute for the Batman series we would all love to see. The series also includes some interesting new approaches to the origins of some of the mythical city’s most colorful and notable characters, and has never disappointed in its portrayal of the cesspool that is the home of Bruce Wayne that results in the birth of the Batman, arguably the greatest comic character ever created. Delightful in its often overly melodramatic depiction of this corrupt city it is just plain fun to watch.

This cyberpunk series about a very neurotic computer hacker is thought provoking and inspired in its exploration of  modern life and mental health against the backdrop of the soul-less corporate dystopia we dwell in these days. Surreal and often amusing in a dark way, this 10-episode-long premier season was the surprise hit of last summer. Widely, and justifiably recognized as sensational by fans and critics alike. It had me hooked early on when the protagonist Elliot Alderson (Rami Malek) uttered his profound and deeply jarring soliloquy in the premiere episode. I was not as surprised as a lot of fans by the fact the character of Mr Robot (Christian Slater) was not in fact a real person, I suspected as much soon after the show began.

I was delighted by Elliot as a paranoid modern Hamlet haunted by the ghost of his dead father. The depiction of drug use and the other elements of Elliot’s world  served as gravy to the meat and potatoes of this depiction of a world gone mad and his determination to do something about it. Never boring, it revealed the sometimes dark underbelly of modern life, and the things most of us choose to ignore as we go about our nicely packaged existence. It is really one of the most original ideas for a series I have seen on TV in years.

This very impressive series is probably the one that should occupy the #1 spot on this list, but since I have only seen the first four episodes it didn’t seem fair to give it the crown over my choice for top honors, simply because it hasn’t had long enough a chance to prove itself yet.

A combination of mystery, intrigue, adventure and action this futuristic story about humanity’s future colonization of the solar system, and the tensions that arise between people living on Mars, the asteroid belt, and Earth looks very promising indeed. With an ensemble cast and three main plots it is based on, it seems well suited for serialized story telling. Suffice it to say there is another mysterious faction that seems to want to drive the other factions to war for unknown reasons. The show has shown evidence of top-notch, well depicted, outer space adventure and action as well as a touch of noir. There are also welcome signs of some well known science fiction tropes that have been noticeably missing from television as of late. Syfy has shown a  nice indication of returning to form with this and other shows. A trend I hope continues.

Imagine waking up from tech-induced sleep aboard a spaceship, (the Yaza), with no idea how you got there, who you are, or where. That’s the premise this show is based on as a crew of strangers try to solve the mystery of their existence. This mystery is at he heart of this somewhat dark, yet lighthearted series that aired last summer on Syfy. As the story unfolds the respective characters begin to learn more about themselves and assume names based on the order in which they awoke, the numbers 1-6. Each has distinct personality traits, and a skill set to varying degrees, and as they slowly begin to trust each other and learn to cooperate, they experience a series of adventures as they go about their search for answers and the truth.

Also aboard the mystery ship is an android they discover, also in sleep mode, who it turns out is linked to the ship and can control its operation and functions. I had issues with this character at first, but soon warmed up to her as a welcome part of the show. She represents another take on the Pinocchio theme and is a sort of female version of Data from STNG.

The series was a pleasant surprise. It uses a formula that should be familiar to fans of Stargate SG-1 and Stargate Atlantis (which makes sense since it is from former Stargate writers/EPs Joseph Mallozzi and Paul Mullie). Implementing a lighthearted touch to the unfolding drama. I remain a fan of those series and its probably why this show resonates with me to the degree that it does. Season one ended with a cliff-hanger conclusion, and I look forward to seeing what happens next in this excellent representation of  good old-fashioned science fiction adventure.