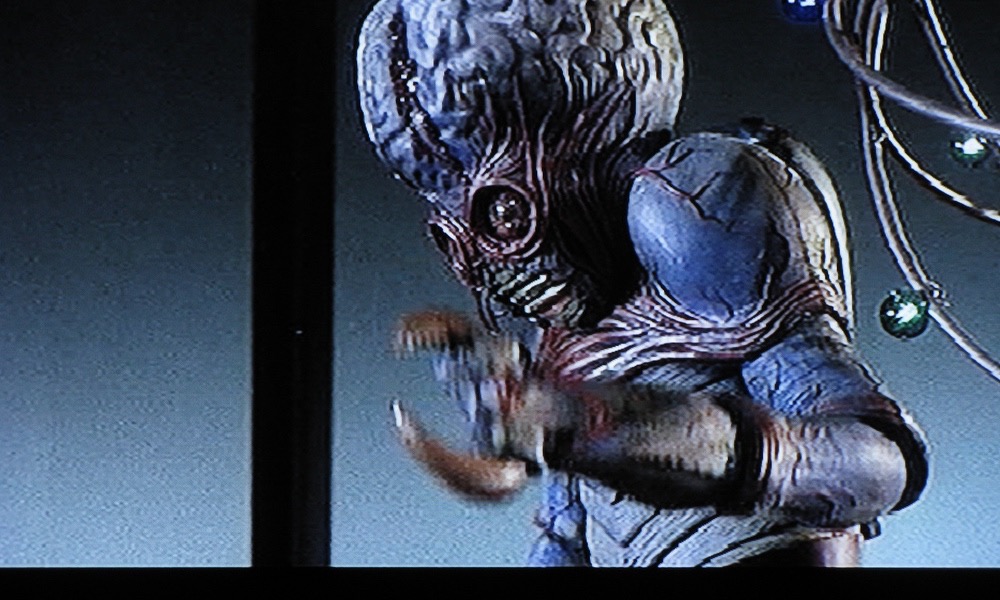 This infamous movie is a truly huge serving of fifties cheese that has the distinction of being the subject of discussion in the 1996 MST3000 movie.

It should be noted this movie was well received by critics at the time of its release for it fifties-era special effects (true enough) well-written script (WRONG), and the technicolor prints it was shown in (true). One has to wonder what the critics could have been so enthused about regarding the writing and script, unless they were paid off for their opinions of course.

The film features Rex Reason as the extremely fifties-style-macho-man  scientist Dr Cal Meachum, Faith Domergue as sexy scientist Ruth Adams (who, in keeping with the patriarchal views of the times, is pretty useless), Jeff Morrow as the white haired Exeter leader of the Metalunans on earth, Lance Fuller as the Metalunan homicidal asshole Brak, and Russel Johnson as Steve Carlson ( Johnson was to later gain fame, and become well known as the Professor of Gilligan’s Island ).

In the beginning of the story Meachum is sent a mysterious package containing instructions and parts to build a complex communication device, the Interociter, which it turns out is only a test to see if he is bright enough to aid the aliens. After completing the task  and turning the contraption on he  is treated to the vision of  Exeter for his trouble. What a payoff. The Interociter is quite an elaborate McGuffin that helps spring the plot. It is little more than an extremely large, fancy phone/television also capable of being used as a weapon. It seems like it would be a very handy item to own when dealing with unwanted phone calls or rude people who interrupt you during conversation, but it has little to do with the story after its initial introduction in the movie.

The rest of the story is this: The Metalunans have come to earth for uranium and scientists to help in their war against the Zagons. After destroying their base on earth (and hopefully Brak with it). Exeter abducts Meachum and Adams in his flying saucer like spaceship and they go to Metaluna only to  arrive as its about to be destroyed. Exeter has an unpleasant encounter with a mutant the aliens breed to work as laborers for them, and is gravely wounded. They return to Earth. Meachum and  Adams exit the ship and Exeter flies it out over the ocean where it is destroyed.

The critics couldn’t have been more wrong about the writing in this sorry attempt at storytelling. The premise is sound enough but soon manages to lose its way not long after it begins. The Technicolor is still impressive in the richness of its tones, and along with the hair styles and fashion choices, gives the movie an unforgettable time-stamp for the period that gave it birth. As for the other visuals they don’t quite stand up so well to the test of time. The laborious trip to the alien planet Metaluna that takes place is laughable in its portrayal of space travel and the dangerous obstacles the alien ship encounters along the way in the form of flying meteors and such. Although there are some remarkable science fiction tropes used in the movie that make it memorable, such as the glass tubes the travelers  have to be placed in to survive their interplanetary voyage, and the interior of the space ship is nicely done. Its almost like trying to evaluate two different movies when talking about this film, One terrible and the other with some pretty cool ideas. Ultimately the film is a real stinker with a terrible, mostly pointless story and little beyond a few cool choices made in art direction to redeem it.

One thought on “SCI-FI NERD: Throwback Thursday – This Island Earth (1955): A Tale Of Two Movies”