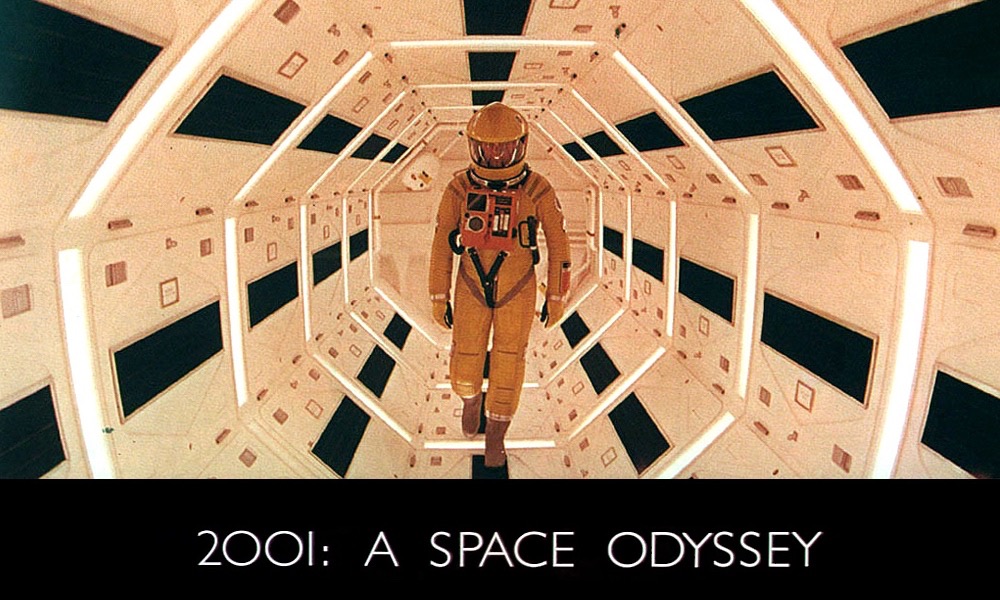 This epic science fiction film about our evolutionary journey from apes to the stars is probably one of the most influential sci-fi movies ever made and marks a turning point in genre filmmaking in the creation of this immortal classic.

This production is a monumental achievement. It took up four years of the lives of co-writer Arthur C Clarke and co-writer/director Stanley Kubrick from the time they first met until completed. Clarke wrote the novelization of the story while the film was made and published not long after the movie was released. Contrary to popular belief, the film and story were mutually informed as they developed. The film is based on several stories written by Clarke. 2001: A Space Odyssey is a film like no other.

2001: A Space Odyssey is epic in its scope. The film deals with the themes of existentialism, human evolution, technology, artificial intelligence, and extraterrestrial life, and from the moment it begins it is captivating and mesmerizing in its effect. I was a kid, and I don’t mind admitting I didn’t fully understand the film the first time I saw it, but I was able to appreciate the awe and wonder seeing the movie induces. Now, decades later I can understand it to a much higher degree.

The story the film tells develops in facets, beginning many centuries before the existence of modern humans. In it, ape-like creatures are depicted already forming tribal groups in conflict over territory, and the resulting discovery of using a crude tool to conduct an early version of warfare, when one ape creature uses a bone to inflict damage on another from a different tribe. The scene, in which humanity has taken up the mantle of the destroyer, and the harbinger of death, a role we have still not grown past to this day.

Present at this event, and all the events that follow is the monolith, a rectangular flat, featureless artifact of alien intelligence that some people think represents alien intervention and influence in our development, while others believe it merely represents us getting observed by that intelligence. It’s a film full of science fiction icons. Indeed, this movie is a parade of iconic shots, a series of symbolic images that, whether you are aware of it or not, speak directly to the psyche in the primal language of the human experience, each as memorable as the one that precedes it. The monolith is among the first archetypal symbols to be seen on the screen and symbolizes one of the central themes of the film from its beginning to its end.

This scene beautifully, and seamlessly transitions to a shot of outer space in the future of our development, at a time when space travel has become a reality, and our simple tools have become more complex. This transition serves to demonstrate Kubrick’s mastery of the medium in which he works, as the entire film does in many ways, throughout its duration. It is a visual masterpiece slowly disclosed like a classic canvas painting gradually revealed for the first time by a master of his craft.

The story’s development is marked by Kubrick’s singular style of stark and sometimes austere, but remarkably impressive sets, as he goes about depicting a realistic and grand portrayal of a beautifully rendered future, surprisingly accurate of its predictions, and the events that occur there. It is at times almost documentary-like in its vision but with some nice touches both amusing, memorable, and always entertaining, as the film glides towards its conclusion. The climax involves a deep space mission to Jupiter aboard the spaceship Discovery One with its computer management system called Hal 9000.

It is not possible to ever say too much about Hal. The Hal 9000 artificial intelligence is a pure classic creation, and immortal science fiction icon, a remarkable and extraordinary genre device that represents technology gone out of control. Among other things Hal represents is what happens when we come to depend too much on the smart technology we create, and how things can go wrong as a result. Done in a way that struck a chord as being realistic (no cliched pop culture robot voice here), very believable, and among the first incorporating many of the abilities, we have come to think of as capturing the true nature of what a real artificial intelligence would be like today.  Although there have been many attempts to imitate this creation, none have equaled the original. His calm voice and stubborn resistance to orders after his breakdown remain unmatched in the suspense, tension, and horror it created in this film, making him a star that will never be forgotten.

The practical special effects in 2001: A Space Odyssey are noteworthy and remarkable for the time. The film pioneered the use of front projection with retroreflective matting. Kubrick used the technique to produce the backdrops in the Africa scenes and the scene when astronauts walk on the moon. Other aspects like the sets and models used in the film were also revolutionary for the time, including a giant “Ferris-wheel” set built for interior spaceship shots. 2001 was nominated for four Academy Awards and received one for its visual effects.

Another noteworthy aspect of this film is the soundtrack which is iconic in its right. It implements works of classical music which endowed the film with much of its impact and helped elevate it to the masterful status it enjoys. Everything came to together in the right way at the right time to create a film that is indeed a unique example of modern science fiction filmmaking. A rare and beautiful event that is difficult to match and that remains widely acclaimed as possibly the most excellent science fiction film ever created.

The conclusion of the film is both a surreal and dramatic climax that becomes very symbolic. The sequence of streaming colored lights and Bowman’s transformation into the star-child represent experiences beyond comprehension where time and space lose their meaning and separation, and a spiritual rebirth that is perhaps the next stage in our evolution resulting from it, as humanity comes full circle in the universe that gave it birth.