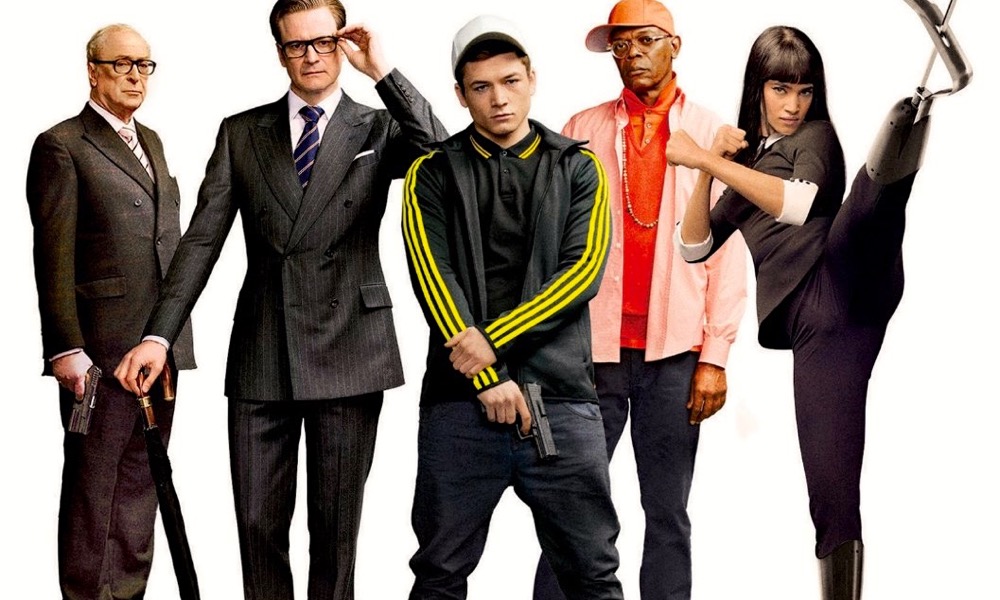 Spy-Fi finally arrives in the 21st century with this film, adapting the genre to the new century in a way that the James Bond franchise, the films this one is both a parody of and a tribute to, has failed to do.

Kingsman: The Secret Service is a 2015 British-American spy action comedy film directed by Matthew Vaughn and based on The Secret Service’s comic book, created by Dave Gibbons and Mark Millar. Vaughn and Jane Goldman wrote the screenplay. It follows the recruitment and training of a potential secret agent, Gary “Eggsy” Unwin (Taron Egerton), into a very secret spy organization called the Kingsmen.

Eggsy joins a mission to tackle a global threat from Richmond Valentine (Samuel L. Jackson), a wealthy megalomaniac. The film also stars Colin Firth, Mark Strong, and Michael Caine. Mark Hamill also appears in the film and even manages to squeeze in a little of his best Joker laugh and voice during his brief appearance.

There’s so much to like about this film; it is hard to know where to start when talking about it. This is spy-fi done well. It does pretty much everything right. Unlike the James Bond franchise, it remembers to include some fun of one of my favorite sub-genres without getting silly and stupid like the Roger Moore Bond films did. Kingsman is a tribute that not only works but actually outdoes the Bond films it’s a parody of.

Kingsman even models itself to the point of being like the Bond films by starting with an action-packed preface, a traditional feature of the Bond films that re-introduces the main character and has him escaping a difficult situation in a unique manner. In this case, it sets up the film’s story and what is to follow.

There is also stuff in this film that reminds me of John Steed from the delightful 60’s British spy-fi series The Avengers (1961-1969). The way the Kingsmen dress, for example, exemplifies the traditional appearance of the old school upper-class Britsh man in business attire, and a catchphrase from the film ‘Oxfords not Brogues’ is a reference to this.

The film has all the requisite elements for films of this kind, a colorful megalomaniac villain, Richmond Valentine (Samuel L Jackson really hamming it up and speaking with a lisp), with a formidable and deadly henchman, (Sofia Boutella as Gazelle – a woman in this case), a dazzling and fun array of high tech gadgets and devices that the plot revolves around, plenty of action and adventure, and of course, the ladies, who are well represented in this excellent and very entertaining film.

This time, the damsel in distress is amusingly and literally a princess in keeping with the film’s tongue-in-cheek tone. She’s no fairy tale princess, though, but a modern woman with appetites and a temperament that says she’s no fragile flower but a real woman.

The villain, Valentine’s plot is a simple one; use the world’s cell phones to generate a wave that affects people’s brains and turns people into homicidal maniacs. He’s convinced the world’s biggest problem is too many people, and his plan is designed .to reduce the world’s population.

The secret organization the film portrays, the Kingsmen, is not the MI6 a lot of spy movie fans may be familiar with. Still, an even more secret organization started by a group of stalwart British noblemen who took it upon themselves to be the guardians of their nation while remaining behind the scenes to the point that kept their existence a secret from the world.

The Kingsmen are modeled after the Arthurian legends, with their agents adopting the names of famous Arthurian knights. There’s even a Merlin (Mark Strong), who serves as the film’s equivalent of Q from the Bond films, except this time around, he serves many purposes, having many of the abilities of Kingsman himself, and even goes out into the field.

The main protagonist, Gary “Eggsy” Unwin (Taron Egerton), is a young man who dresses in the fashion of a fan of hip-hop and is unquestionably a product of the working class. The kid’s not a wimp. He’s intelligent and athletic. When he is chased by a group of ruffians looking for revenge, he shows an ability to engage in parkour and escapes them with ease.

A lot of the plot revolves around him. The fact that he’s a commoner, and has a working-class life, plays a big role in the film’s narrative. Things are set in motion for him to be part of this story early in the film, which actually starts while he’s still a toddler. It begins with the death of his father, a Kingsman, who makes a noble sacrifice, and gets killed while on a mission. Later, this event affects his life choices; he is hesitant to explore opportunities because he doesn’t want to leave his mother like his father involuntarily did.

When he gets into trouble with the law, he calls a number to call in a  favor from a man who was a friend and fellow agent of his father’s, Harry Hart, aka Galahad (Colin Firth), he is the personification of the British class structure just short of the aristocracy. Indeed, a lot of the story this film tells is about Eggsy’s encounter with some of the country’s upper-class youth he meets while training to become a Kingsman. He is a mutt among purebreds, a fish out of the water, and it soon becomes apparent he is in for a lot of bullying and unpleasant treatment by these snobby a-holes.

This is a violent film, there are all sorts of unpleasant things that happen to people doing its depiction of the story, but I would be amiss if I did not mention one scene in particular. Fans of this film know I am referring to the church scene when Valentine tests his satellite-operated device that makes people into violent killing machines that target whoever is nearby. This scene is remarkable and memorable for its graphic portrayal of the harm people can inflict on each other when all restraint to not do so is removed. It’s a scene the equal of which I have only seen in one other film, Hardcore Henry (2015), a film where action like this is nearly relentlessly endless.

There’s also another darkly amusing scene. When Valentine’s security implants are triggered, it sets off a sequence of people’s heads exploding to a musical rendition of Pomp and Circumstance, almost as if it’s a chorus line dance routine from a Busby Berkley film.

In the end, I suppose, it could be said this story has some of the qualities of a fairy tale. Eggsy overcomes all the obstacles in his path and becomes a Kingsman and quite a good one at that. Harry, his mentor, gets killed, so it seems as if Eggsy may be in line to become the next Galahad, and as anyone familiar with the Arthurian legends knows, Galahad was the greatest knight of all.

Eggsy saves the day and gets the girl, who promises him a special, very un-ladylike prize if he rescues her from her cell. Despite that, this remains one of the best spy-fi films I have seen in a long time. It is a delightful and entertaining film, and I am very excited about the sequel, Kingsman: The Golden Circle, scheduled for release on June 16, 2017.

The sequel stars Taron Egerton, Julianne Moore, Halle Berry, Mark Strong, Pedro Pascal, Channing Tatum, and Jeff Bridges, and the premise of the film has been said to be a story where Eggsy, Merlin, and Roxy head to the United States to join forces with Statesman, their US counterpart after the Kingsman HQ is destroyed by Poppy, an evil American mastermind. Despite his character’s death, it has been rumored Colin Firth could return for the sequel.

Much of the material for the original Kingsman was based on Millar’s graphic novel, adapted by Vaughn and Goldman for the silver screen. That being so, Millar never wrote a sequel, meaning the story for the follow-up film will be completely and utterly original. It gives the screenwriting team a whole lot of leeway for a news story, but at the same time, it also removes the safety net of the source material. Kingsman 2 will be a big moment for Vaughn and Goldman, showing whether or not they’re up to the challenge of carrying this franchise’s story on their own.