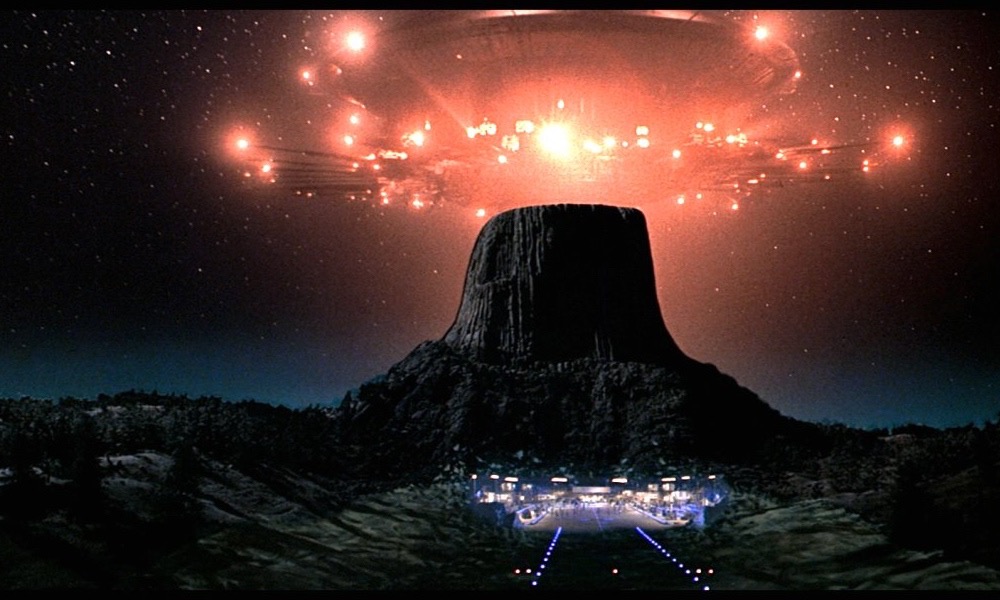 That obsessive-compulsive behavior you are experiencing may be due to alien influence.

Thirty-eight years ago on December 14th, 1977, this excellent, remarkably delightful, and optimistic tale of alien visitation made its debut. The widely acknowledged “boy wonder” at the time, writer-director Steven Spielberg had done it again. The science fiction follow-up to Jaws, firmly entrenched Spielberg as the cinematic voice of his day and made him one of the most popular and sought-after filmmakers of the period. Humanity was in a transitional period that marked the end of the age of innocence in its evolution and at the beginning of time characterized by a more cynical view of the world. This movie almost seems like an attempt to reawaken the child-like wonder with which we had previously seen the world and were beginning to lose. Along the way, Spielberg managed to make science fiction more main-stream than it had ever been before.

This film is close to perfect in its depiction of the fantastical story it tells. It almost has the quality of a time capsule preserving the tasteless seventies in all its splendor. The hairstyles, the fashions, the vehicles, and the portrayal of suburban middle-class life in the midwest are all here on full display. Like an archeological dig, it draws a clear picture of life at the time, and how a series of strange occurrences affect that world.

This movie has so many delightful and memorable moments it’s hard to know where to begin, but here’s a brief synopsis.

Starting in various locations around the world, it begins by showing strange things are happening, like the sudden reappearance of missing planes and even a full-sized ship in two different deserts a world apart. The only thing they have in common is they are both isolated locations. We meet a group of government ordained scientists who are investigating UFO related odd occurrences like these led by Claude Lacombe (Francois Truffaut), joined by interpreter/ex-cartographer David Laughlin (Bob Balaban). The group visits several sites around the world in search of evidence of alien activity. Along the way, they discover a series of audio tones associated with these events. Signs of extraterrestrial activity mounts but no solid proof emerges.

Meanwhile in Muncie, Indiana there has been a series of power blackouts and technician Roy Neary (Richard Dreyfuss) is sent to investigate. He gets lost and while stopped at a railroad crossing. He is witness to the strange behavior of some nearby mailboxes. Suddenly he is bathed in almost unbearably bright light. The power in his truck goes out, and abruptly all of the contents of his vehicle fly off from their locations inside the vehicle’s cab and begin to fly around the cab of the truck.

At around the same time an infant boy, Barry Guiler (Cary Guffy) is awakened by the sounds of his toys activated and discovers something in the house. His reaction to this is the natural response children his age would have, he begins to play with the visitors and runs outside in pursuit of his new friends. His mom, Jilian Guiler (Melinda Dillon) wakes up to find him running away from the house into the nearby woods. She follows after the small child to seek him.

Roy and Jilian meet after he nearly runs down Barry at a place that seems well known to the local yokels that congregate there. Some passing colorful alien ships whiz by chased by the police and Roy quickly joins the pursuit. This event is one of many amusing scenes in the movie and is one of the reasons the film works so well. Spielberg deftly depicts the patent absurdity of situations in a way that is amusing and very realistically all-too-human at the same time.

These events lay the foundation for the story that follows, Dreyfuss is beyond excellent as every man Roy. His portrayal of Roy’s response to the events that shake his typical suburban working-class life to its foundation is one of Dreyfuss’ most memorable performances of his acting career. His chance encounter with an alien ship leaves him marked with a face that appears to be half sunburnt — his wife. Ronny (Teri Garr) is only concerned with appearances and how to explain it away to neighbors or anyone else that might be interested enough to inquire. The inferences of what has occurred seem beyond her.

He seems fine until he sees something in a mound of shaving cream in his hand,  which signals the beginning of erratic behavior on his part. This part of the movie is amusing at first, but it soon shifts in tone to become a dark portrait of the onset of mental illness and how it affects his family. His wife is unable to cope with it and becomes hostile. His kids are saddened and scared by what is happening to their dad because at their age they fail to understand. She leaves him and takes the kids.

Meanwhile, the aliens have returned to Jilian’s isolated home and abducted her son. Dillon is convincing in her touching portrayal of the mother who is desperate to prevent her son from being taken, and later as a loving mom who wants only to recover him. The infant Barry’s portrayal is convincing as well. Spielberg had a real talent for bringing out the best in child actors, and this movie is not an exception to that rule.

Shortly after this, the image of a place, Devil’s Tower Wyoming is on the news, and Roy finally knows the picture that has been plaguing his tormented mind is real and recognizes it as the answer to what has been driving him to act insane. The government has discovered a hidden message in the audio tones found by the scientists which point to this location and have decided to mount a cover-up in the form of a deadly nerve gas leak to get people to leave the area.

Roy and Jilian meet again because, like many others, they are compelled to visit this place. They arrive and find the area full of military personnel. Things escalate, and in defiance of government orders, Roy and Jilian decide to go further into the forbidden zone in his vehicle. They get captured by the military but escape, and joined by another man determined to find the truth, take off again on foot to climb the rocky plateau. Their climb nearly ends when military helicopters attempt to gas them during their ascent up the steep incline, but they manage to escape and reach the top, losing their companion along the way.

The big payoff occurs in the film’s climax when just as they reach the top a group of alien ships arrive and put on a fantastic light show as their spacecraft dance in the sky above. Eventually, a very colorful mothership comes and disgorges a group of little aliens, along with some humans who have been missing for years and even decades. The scene is a hive of activity. Jilian had chosen to stop short of joining the scientists and military at the staging area near the plateau’s peak but when she sees her son emerge from the ship she runs to meet him. Roy gets welcomed by the aliens and is last seen entering the mothership with them. Sometimes the family you belong to is not the one you know. Close Encounters Of The Third Kind is Spielberg at his peak resulting in a beautiful film filled with optimism and lots of heart. It’s a beautiful movie.