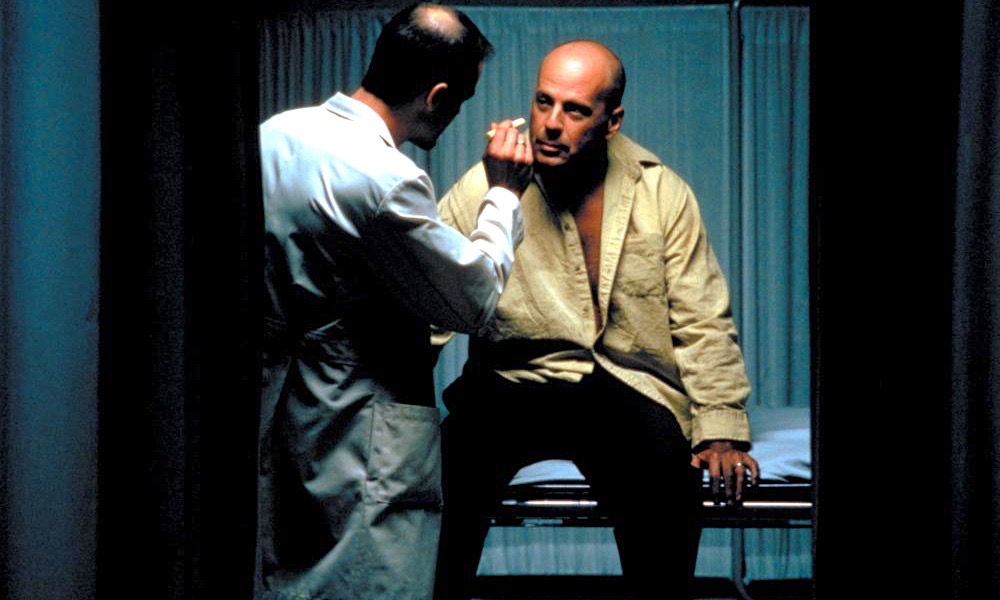 Unbreakable’s eerily unorthodox approach to the sub-genre it portrays sets it apart as one of a kind, and that’s just the beginning of the surprises its story provides.

To say M. Night Shyamalan’s Unbreakable provides a unique take on the superhero genre is an understatement. It’s pretty much the opposite of what we’ve come to expect from superhero movies. Samuel Jackson redefines the evil villain, and the dream-like quality of the film’s pace and look, combined with Willis’ low-key performance belie the film’s story and the mind-blowing surprise twist ending.

The plot revolves mostly around two characters. In Philadelphia in 1961, Elijah Price (Samuel L. Jackson) is born with Type I osteogenesis imperfecta, a rare disease that renders sufferers’ bones extremely fragile and prone to fracture. As revealed later in flashbacks, Elijah—who grows up to become a comic-book art dealer—develops a theory, based on the comics he has read during his many hospital stays, that if he represents extreme human frailty, there must be someone “unbreakable” at the opposite extreme.

In the film, a security guard named David Dunn (Willis) survives a horrific train crash, which leads to a journey of self-discovery that changes his life forever. After the incident, he meets a manipulative half-crippled comic book shop owner named Elijah Price who manipulates Dunn into believing that what Dunn’s son is thinking — that David Dunn is a superhero with powerful superhuman powers and skills.

Although it becomes apparent the two are opposites, what isn’t obvious is how far that oppositeness goes. Dunn continues to use his abilities to intervene in one bad situation after another, never suspecting, as does the viewer, what’s behind the series of potentially deadly developments or the actual nature of the situation he is experiencing.

The film is moody and develops at a leisurely pace, and is so subtle in how it develops it never telegraphs the real story taking place. At the center of its narrative, that it is Price who is manipulating things all along putting Dunn into one deadly test after another, up to the point of finding out his one weakness is something so innocuous as water, and how it can destroy him. It’s not until the film’s end the actual nature of their relationship sees the light of day as Dunn discovers he does have superhuman powers and the revelation that Price was behind every deadly situation he has experienced. The true evil nature of the fragile man Price is a shocking revelation at the end, and that the man has been his evil archenemy all along.

Upon its release on November 22, 2000, Unbreakable was well received by fans and critics alike. Many regard it as one of Shyamalan’s best films, and Time listed the film as one of the top ten superhero movies of all time.

Spencer Treat Clark and Charlayne Woodard who appeared in M. Night Shyamalan’s “Unbreakable,” are reprising their roles in “Glass” the filmmaker’s sequel to the 2000 hit.

“Glass” is a follow-up to Shyamalan’s films “Split” and “Unbreakable,” in which Bruce Willis starred as David Dunn, a security guard who discovers he has superhuman powers that allow him to see the crimes people have committed by touching them.

Willis and his “Unbreakable” co-star Samuel L. Jackson are also returning, along with “Split” stars James McAvoy and Anya Taylor-Joy.

In “Glass,” Dunn pursues Crumb’s superhuman figure of The Beast in a series of escalating encounters, while the shadowy presence of Elijah Price, aka Mr. Glass (Jackson), emerges as an orchestrator who holds secrets critical to both men.

Clark is back as Willis’ son, while Woodard is returning to play Jackson’s mother.