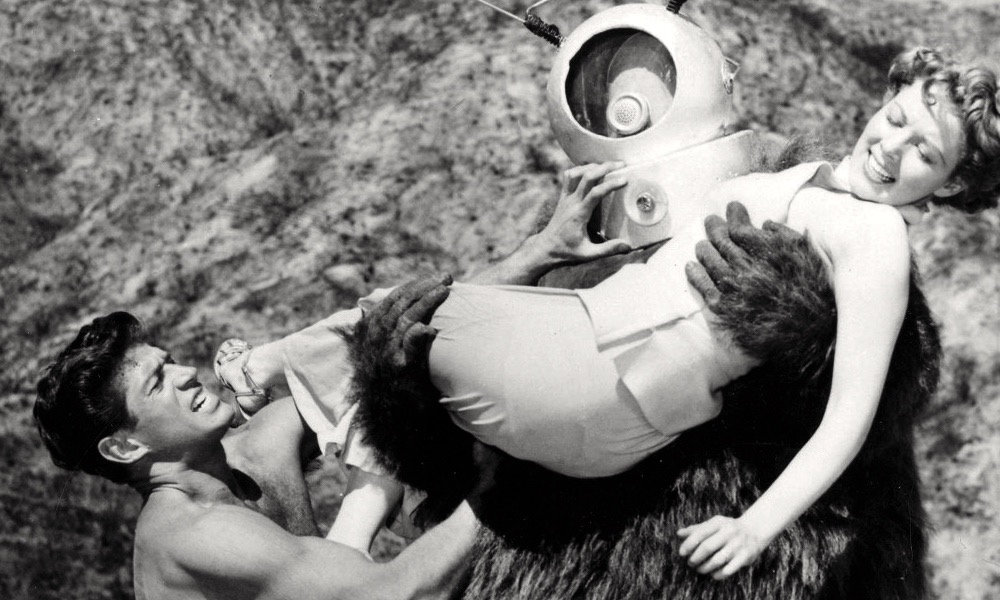 From the patently absurd Robot Monster to the stealthy Predator, movie creators have delighted genre fans with creatures designed to kill us in gruesomely unpleasant ways.

Sometimes we take them for granted, but there are some special aliens out there with one simple mission – kill people. These movie creations use everything at their disposal to carry out their deadly mission from technology to speed, agility, strength, or even biological makeup these inventive creations are a fascinating group. They all share the quality of being difficult to kill making it even more difficult to eliminate the danger they represent.

Our list begins with one of the earliest movie creations of this sort, The Blob. One of the most inventive creatures on our list and one of my favorites. The Blob is a growing, corrosive alien amoeba that crashes to Earth from outer space inside a meteorite. It engulfs and then dissolves citizens in the small community of Downingtown, Pennsylvania, growing larger, redder, and more aggressive each time it does so, eventually becoming larger than a building. There seems to be no stopping the creature’s relentless feeding frenzy until its Achilles heel – cold – is accidentally discovered by the movie’s teenage hero (played by Steve McQueen). Even then, it seems impossible to kill the creature, once subdued, it can only be stopped by shipping it off to the Arctic while it is sill alive.

Famous for the creative use of random items in creating its unique monstrous killer, this cult B-movie creation is well known for the original design of the creature. Robot Monster tells the story of Moon robot Ro-Man’s mission to Earth to destroy humanity. He manages to kill all but eight survivors, who have become immune to his death ray. he is smitten by an earth woman which naturally leads to his doom.

This malevolent, humanoid, plant-based alien turns out to be the stuff of nightmares when it is encountered by a group of scientists at a remote Arctic research station. Immensely strong and able to withstand having its limbs severed without it having much effect in slowing it down the Thing is a remorseless, relentless killer. An even more frightening version of the creature returned in a movie remake titled simply The Thing (1982) directed by John Carpenter. Both films are considered among the best of their genre ever made.

This iconic humanoid creature has a unique and unforgettable appearance which helped cement his popularity with fans. Stealthy and skilled as a hunter its abilities are augmented by advanced technology making it even more deadly. By the time you know its there its already too late because you are probably its next victim.

Is a fictional endoparasitoid extraterrestrial species Its story has developed over the years, and we all know about this classic movie creature designed to be the perfect killing machine, with acid for blood and the ability to adapt to its environment. they don’t come any deadlier. If you see one it’s probably too late. Kiss your ass goodbye.

The Daleks are a fictional extraterrestrial race of mutants principally portrayed in the British science fiction television program Doctor Who. The Daleks are single-minded in their mission. Merciless and pitiless cyborg aliens, demanding total conformity, bent on conquest of the universe and the extermination of what they see as inferior races. Their catchphrase, “Exterminate!”, is a well-recognised reference in British popular culture.

Within the program’s narrative, the Daleks were engineered by the scientist Davros during the final years of a thousand-year war between his people, the Kaleds, and their enemies the Thals. With some Kaleds already badly mutated and damaged by nuclear war, Davros genetically modified the Kaleds and integrated them with a tank-like, robotic shell, removing their every emotion apart from hate. His creations soon came to view themselves as the supreme race in the universe, intent on purging the universe of all non-Dalek life.

The Wraith are intelligent humanoids who are genetically close to insects, though they are predominantly human. One of several types pf outer-space vampires found in movie and TV productions  In the science fiction television series Stargate Atlantis, the Wraith are the original enemy alien species, first introduced in the pilot episode “Rising”. In the series, they are a vampire-like telepathic race who feed on the “life-force” of humans and are the dominant power in the Pegasus galaxy.

That’s it for now, I’m sure I must have overlooked one alien killer or another. Feel free to correct my unintentional oversight in the comments.

One thought on “Natural Born Killers: An Abbreviated Guide To Alien Creatures Created To Kill People”