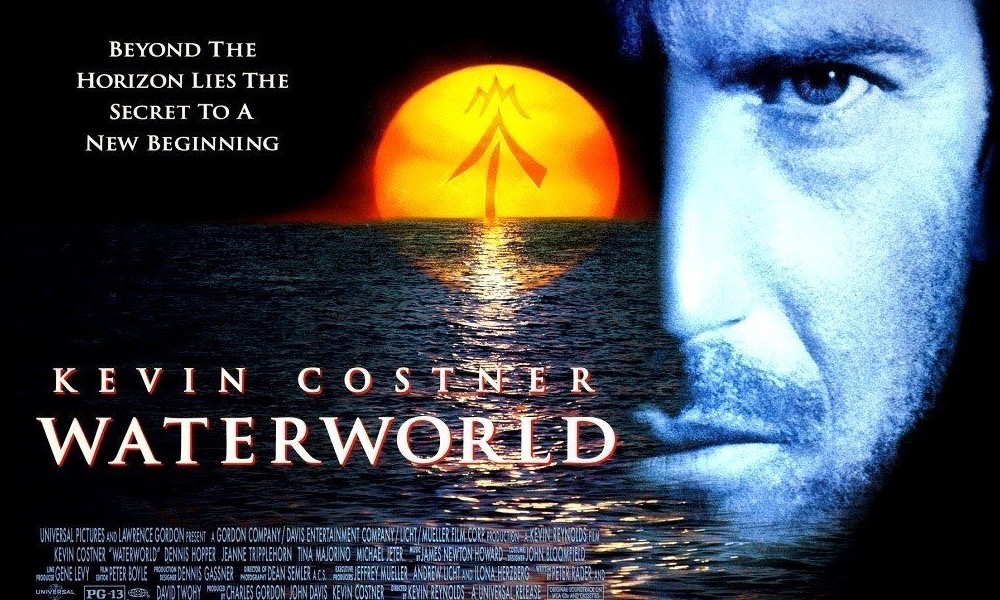 A map, a mutant, a legend, and little girl add up to classic adventure and mystery in a future world covered in endless oceans without dry land.

Waterworld tells a story that is reminiscent of the great adventures of Jules Verne, and Robert Louis Stevenson’s classic Treasure Island. Mystery and adventure surrounding the search for a lost map and the legendary secret it leads to are at the center of its narrative, in which a wandering mutant, a  brave woman, and an unusual, special little girl are central to solving the riddle it holds.

Plagued by disaster after disaster during production, this movie became one of the most expensive films ever made at the time of its creation, leading to the film becoming the subject of mean spirited jokes, that ultimately resulted in an unjustified poor showing at the box office. I like this movie and think it deserves a lot more respect and admiration than it usually gets from fans of genre films.

Waterworld is a 1995 American post-apocalyptic science fiction action film directed by Kevin Reynolds and co-written by Peter Rader and David Twohy. It was based on Rader’s original 1986 screenplay and stars Kevin Costner as The Mariner, Dennis Hopper as the Deacon, Jean Tripplehorn as Helen, Tina Majorino as Enola, and Michael Jeter as Old Gregor. It depicts our world sometime in the future (2500?), where a vast ocean covers the entire world. There are clusters of ships and other floating objects that serve as trading posts, and makeshift colonies where groups of people exist in small pockets of humanity.

This world has settled into anarchy and also populated by individuals that collect tribute and engage in other forms of behavior that prey on those unable to defend themselves against violent aggression. Most notable amongst these pirates and villains is a group called the Smokers led by The Deacon. They live aboard the rusting and hole-riddled tanker ship the Exxon Valdes, that serves as their headquarters.

This group, in fact, the whole world as imagined in this film owes a lot in its appearance, like many post-apocalyptic films of this kind, to the movie Road Warrior (1981) and its iconic style and approach to portraying humanity and technology in the future. The sets and the Mariner’s ship are centerpieces in this film that are noteworthy for their style and appearance.

The story mostly concerns itself with the search for a map, that almost no one knows is tattooed on the back of Enola, that could lead to the location of dry land in a world where dirt sometimes serves as currency. The soil is precious because it of its value to be used to grow plants for food, in a world where food, and other things we take for granted today, like paper, are difficult to acquire.

Costner plays the Mariner in his usual low key approach to the roles he plays. The Mariner, a mutant with gills, which may represent the future of humanity, is once again the strong silent type, cold, distant, and matter of fact in his pragmatism. After all, under the circumstances, it’s literally sink or swim in the struggle to survive. In sharp contrast is Hopper’s over-the-top portrayal of The Deacon a blustering manic authoritarian figure who leads the pirates in a world that has become fertile ground for anarchy and all it implies.

When all of these elements come together, the result is not much of a surprise, but it is still very entertaining to watch as the pirates, and their leader meet their fates at the hands of the Mariner, and the crafty tactics and strategy he employs in this sometimes amusing, mostly enjoyable, adventurous tale. A fun film worth watching again.