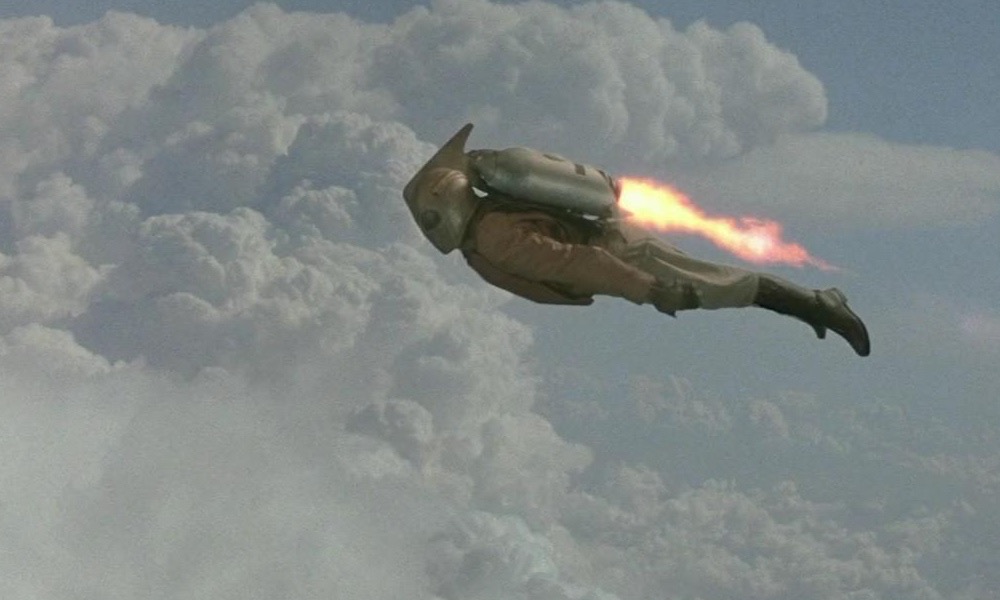 The original period piece story was just a tease with Nazi, spies, mystery, and adventure. The Rocketeer is a creation that demands more adventures.

Set in 1938 Los Angeles, California, The Rocketeer tells the story of stunt pilot Cliff Secord (Campbell) who discovers a rocket powered jet pack that enables him to fly without an aircraft. The story is a simple one involving Nazis, spies, gangsters, mystery and adventure in its straight forward narrative of the events that result from Secord’s discovery of the fantastic device the story revolves around. I am especially fond of this film mainly because it works so well as a period piece, and the retro styling of the device and character helped make it memorable and added to its appeal. The movie is full of marvelous period touches that add to its charm.

Campbell is perfect as Secord; he is an archetypal clean cut, boyish, hero whose discovery complicates his simple life far beyond his expectations. He is drawn to the idea of flying, flying fast; it is his dream to win a race in one of the planes his life revolves around. Secord shares his adventures with hs best friend, and mechanic Peevy (Arkin). Arkin is great as Peevy. His usual low key and the charming approach he applies to character roles he plays is a welcome addition to the film.

There’s only one problem, but it’s a big one, the device was stolen from Howard Hughes (Terry O’Quinn), by gangsters who work for Eddie Valentine (Sorvino) who both want it back. These events all serve to set up the premise of the film as the gangsters, Hughes, and the federal agents he works with, along with, unknown to the others, Nazi spies, all compete to regain possession of the unique prototype. Sorvino, once again, is typecast as an Italian-American gangster, a role he is at home with and executes well.

After examining the device, and experimenting with it in secret, Secord and Peevy figure out what it is and design protective headgear in the form of a stylish art deco helmet for the user to wear, which also serves to disguise the user’s face. When a friend who works for the same flying circus as Secord finds himself in trouble, and in danger of crashing his plane, Second dons the jet pack and helmet and flies to the rescue of his friend.

His heroic deeds soon attract the attention of Howard Hughes and the FBI, who are hunting for the missing jet pack, along with the gangsters, as well as Nazi operatives. Complicating things is Secord’s girlfriend, Jenny Blake (Jennifer Connelly), who has ambitions to be an actress. Unknown to her, and everyone else, the movie star, Neville Sinclair (Timothy Dalton) who she lands a job on a film with, is secretly a Nazi spy who is also in pursuit of the device for the German bad guys he works for covertly. Sinclair works with the gangsters, who stole it for him in the first place, unaware of his Nazi allegiance. Dalton is excellent as the sinister, vain, and unsavory Sinclair.

Sinclair sends his goon-like henchman associate Lothar (Tiny Ron Taylor) to Secord and Peevy’s home to recover the object, but he fails in his mission and ends up in a shootout with the police for his trouble, but escapes. The shoot-out leaves Peevy and Secord’s destroyed. Lothar’s appearance is remarkable. He is enormous and unique in his almost monster-like appearance. He resembles a character from a Dick Tracy comic strip. His presence in the film is memorable and helps elevate it into something more special.

Dalton’s character is a reference to Errol Flynn, accused at one time of being a Nazi spy himself in real life. Those accusations were never substantiated and remain a footnote in the mythology of the famous movie star’s legendary life.

Sinclair turns on the charm when he discovers the connection between the innocent Jenny and the device he desires to acquire. He attempts to dazzle her with his star power but ends up having to resort to taking her hostage against her will as leverage in a trade with Secord to obtain the jet pack.

The movie reaches a dramatic climax when a gunfight breaks out between Nazi soldiers, and the gangsters who are now aware of the un-American connection Sinclair has with them, against the background of the Griffith Observatory. When a gigantic zeppelin appears out of nowhere overhead, Sinclair absconds with Jenny aboard it, and Secord follows using the device everybody wants.

The movie has a fairy-tale happy ending with Jenny rescued, and Sinclair ironically killed by the device he has sought throughout the film, because of a leak caused by a bullet hole. Secord is rewarded for his part in events when Hughes presents him with a new plane. Rocketeer is a delightful genre film with romance, action, adventure, mystery, humor, and charm, that is most of all, fun. Well worth watching again, and again.