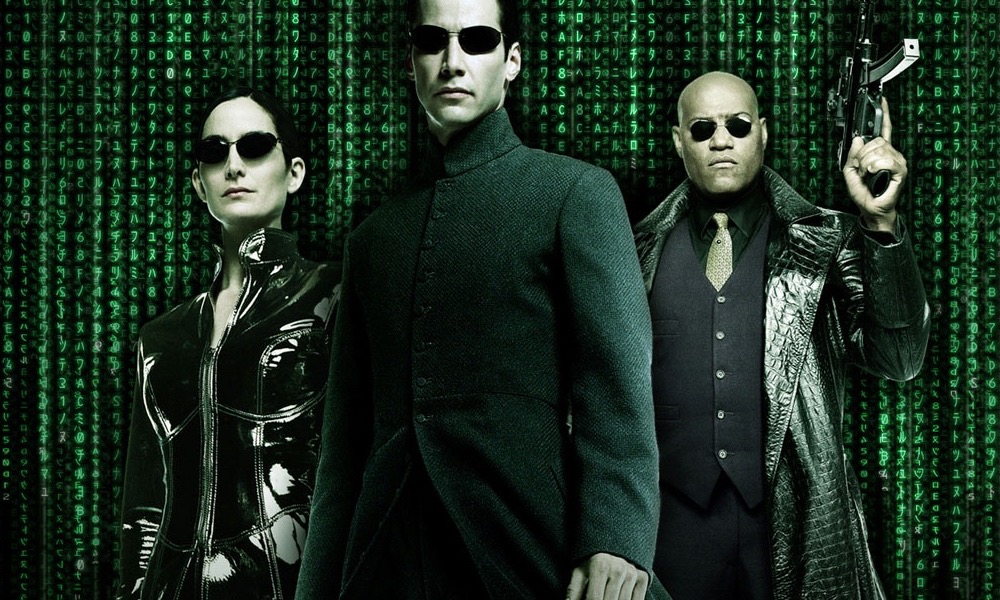 The Matrix’s premiere in 1999 marks the early arrival of the 21st-century science fiction movie, the brilliant opening salvo of a franchise that unfortunately went sideways as it continued.

There is so much to like about this film, and all the remarkable and memorable scenes and iconic moments it contains, it would require a much broader context to adequately do it justice, and give it the detailed appreciation it is due. It marks a shift in genre films, not only for the excellence of the smart concepts portrayed in its narrative and themes, and how they’re told, but also the groundbreaking technical advances it represented at the time. Part of what makes The Matrix so great is that it showed us things we had never seen before

As cyberpunk as they come, The Matrix brilliantly integrates concepts as far-flung as  Lewis Carroll’s “Alice’s Adventures in Wonderland.” This film also incorporates ideas from mythology, religion, and philosophy including the esoteric and occult concepts of the spiritual teachings of Buddhism, Christianity, Gnosticism, Hinduism, and Judaism, into the core ideas of the movie.

The narrative takes on a more profound nature as an allegory relating to life in general and how people are sometimes prone to sleepwalk through it, accepting the status quo without ever questioning what is going on beyond their momentary gratification and what makes it possible.

Written and directed by The Wachowski Brothers (more recently brother and sister), The Matrix stars a great ensemble cast featuring Keanu Reeves, Laurence Fishburne, Carrie-Anne Moss, Hugo Weaving, Joe Pantoliano, and others. It’s a story that depicts a dystopian future in which the world, as perceived by most humans, is, in reality, a simulation called “the Matrix.” Reeves’ character Neo is awakened into this existence by Fishburn’s Morpheus because he may be the “the one” a human that prophecy says will arrive to free humanity from its technologically imposed slavery and the artificial reality it perceives as real.

The cast is excellent in this, without any noticeable weak links in its execution of the characters they portray. It remains one of the best roles ever done by the sometimes wooden Reeves as Neo whose evolution the film depicts. Fishburn is also excellent as the gatekeeper Morpheus, and Carrie-Anne Moss is marvelous and memorable as Trinity. Hugo Weaving almost manages to steal the show as the very unpleasant and rage-filled Agent Smith, the film’s iconic main antagonist.

The machines fabricate “agents” to carry out their will in these confrontations. These agents, because they are fabrications, have special abilities that on the surface defy the laws of physics and allow them to travel almost instantly in between locations and occupy bodies already present in any desired place. These are abilities most actual people in the film only have limited access to, depending on how liberated they are from their sense of what they perceive is real. Separating what’s real from what isn’t is the goal of Neo’s training so he can become someone who can transcend the illusion of what his mind tells him is real.

Still widely regarded as one of the best modern classics out there, The Matrix is legendary in its status as an iconic and excellent example of contemporary science fiction films. The story and stylish imagery still hold up today with very little in the way of competition since its creation to topple it from the throne as one of the best in genre movie productions. It has often been imitated but never equaled in its ability to entertain and tell its excellent story.

The  Matrix was followed by two sequels both written and directed by the Wachowskis, The Matrix Reloaded (2003) and The Matrix Revolutions (2003),  also featuring members of the original cast, that unfortunately did not live up to the legacy of the original. It was well-received by critics and won four Academy Awards as well as other accolades including BAFTA Awards and Saturn Awards. Reviewers praised The Matrix for its innovative visual effects, cinematography and its entertainment value.

***UPDATE 8/21/2019*** There are reports that Lana Wachowski is set to write and direct a fourth film set in the world of “The Matrix,” with Keanu Reeves and Carrie-Anne Moss reprising their roles as Neo and Trinity, respectively. Production on the film is expected to beging early next year, 2020.