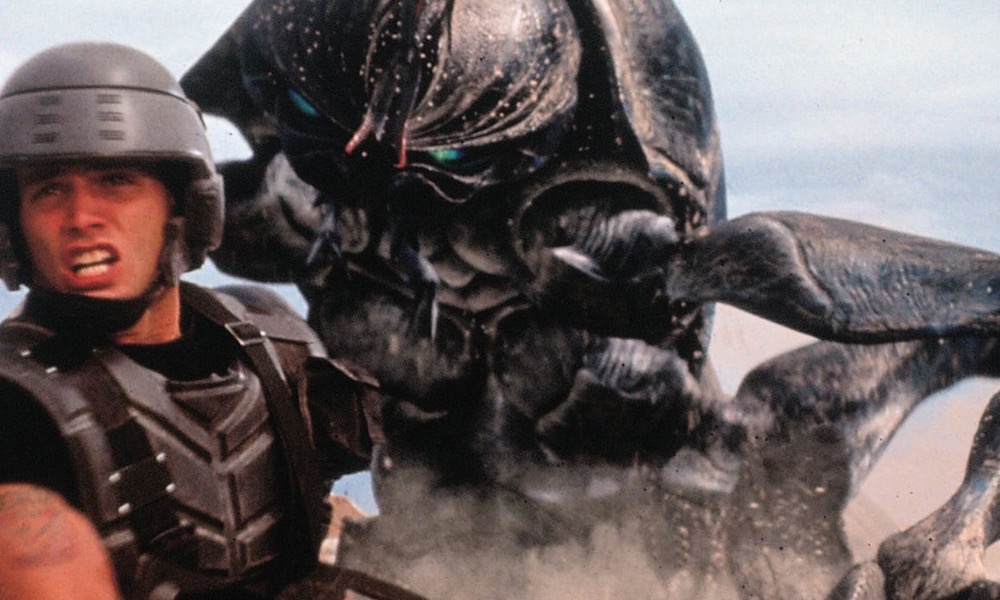 Don’t blink, or you might miss the satire as Paul Verhoeven unleashes a barrage of classic war movie tropes in this action-packed thriller of a modern science fiction classic. “Would you like to know more”?

Starship Troopers, directed by Paul Verhoeven and Edward Neumeier, is really a good war movie. Almost too good to work as a satire. It methodically goes about the business of glorifying war and the people that get caught up in it to the point it’s almost easy to forget it’s a scathing indictment of fascism and the things fascists do to manipulate the public and carry out its authoritarian agenda. Using hyperbole and irony, the film was meant to poke fun at modern America and its militaristic foreign policy.

There has been a lot of confusion regarding the source material of this film. It was never based on the novel by Robert Heinlein, although it “borrowed” the title. The film’s narrative comes from an unrelated script titled “Bug Hunt At Outpost Nine.”

The studio is not remaking the film but will return to the original Heinlein novel for an all-new take. No personnel from the 1997 film are involved.

Starship Troopers begins with a recruitment ad filled with eager young faces ready for active duty. It’s a reminder of how it’s easier to manipulate the young into following orders and more responsive to strong authoritarian figures. These ads continue throughout the film, and it becomes increasingly apparent this is propaganda at work.

It portrays the world governed by a body referred to as the Federation, very militaristic in appearance and masterful at manipulating public opinion through the mass media it controls. The message they broadcast is unmistakable; sign up, or you are not one of us. People who do not join the military are denied the right to vote and are referred to as civilians, while those that do become citizens with more benefits and respect. The military consists of mobile infantry, reminiscent of the present-day Marines and the Air Marshals, the future air force.

As the story unfolds, we meet the four main characters the narrative focuses on:

John “Johnny” Rico: (Casper Van Dien)  a spoiled rich kid who is a jock and captain of the arena-style football team at his high school in Buenos Aires. Against his parents’ wishes, he passes on getting into Harvard to follow his girlfriend into military service. He’s an athletic science fiction hero in the fashion of Flash Gordon.

Carmen Ibanez: (Denise Richards) also a privileged young woman who is Rico’s girlfriend. She is brilliant and determined to be a pilot in the military.

Isabel “Dizzy” Flores: (Dina Meyer) Rico’s teammate loves him despite the fact Rico does not reciprocate, creating a love triangle subplot as part of the movie’s drama that sometimes drifts into soap opera territory.

This production employs a memorable ensemble cast. Other remarkable characters in the narrative include some well-known members of the science fiction movie and tv stable, including Michael Ironside as  Lt, Jean Rasczak. Clancy Brown is memorable as Sgt Zim,   and  Jake Busey as Pvt, Ace Levy.

Humanity comes close to being its own worst enemy in a war; the movie hints they started by having an arrogant attitude based on the assumption of superiority over their insect foes. Because of this, people do not understand what they are up against, even though the bugs have demonstrated their ability to launch asteroids at Earth at will. One of these asteroids hits Buenos Aires and destroys it.

There are no punches pulled regarding the depiction of violence portrayed in the film, including multiple beheadings, dismemberments, and bodies torn asunder by the dangerous giant bug-like creatures with which humanity is at war. Battle scenes are violent and chaotic. Depictions of spaceships like the Rodger Young, which plays a significant role in the story, along with things that occur in outer space, are outstanding and impressive, including a massive defensive emplacement located near the moon; the film won a nomination for an Academy Award for outstanding visuals in 1998. Starship Troopers earned an “R” rating for the graphic violence, some nudity, and language. They represented a good argument for including these elements in science fiction movies aimed at more mature audiences.

The alien “bugs” are noteworthy in this film; they come in all shapes and sizes and seem to have specialized tasks within their ranks. The infantry bugs are numerous and are intimidating in their size, speed, and abilities because they are difficult to kill. They are living weapons. Other types also portrayed, some large, resembling beetles, to shoot chemical fire or bioluminescent projectiles. They are the bug version of armored infantry and artillery. There are still others capable of flight. Another class of aliens with the ability to think and the reason is revealed towards the end of the film. These enormous worm-like creatures can absorb information by literally sucking the brains out of a human skull. These are the enemy’s generals.

This film chills in its portrayal of humanity as the savage apes we are, natural-born killers who are deacons of destruction and disciples of death, spreading like a lethal disease across the galaxy. Any other intelligent life forms should and would avoid us like the plague.

I never tire of watching this movie because it’s just plain fun despite the visceral depictions of death and bloody mayhem. A true modern classic.