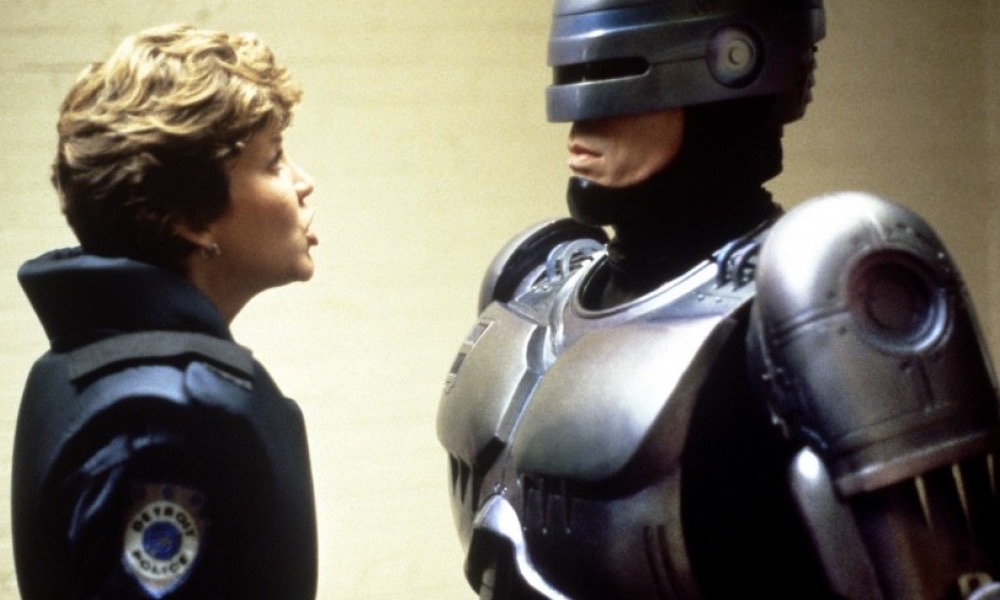 One of science fiction’s greatest functions as art and literature is when it serves as a mirror and reflects the human condition, life in general, and shines a light on the things we should remember never to take for granted.

Paul Verhoeven’s Robocop, written by Edward Neumeier and Michael Miner, is pure genius. It takes a standard western plot and elevates it beyond its DNA. With the timestamp of the eighties in full evidence, this movie is an irreverent, socially relevant, often amusing, witty, smart and iconic example of one of the genre’s highest callings – the social satire. Beyond being an excellent action-packed prediction and depiction of life in a dystopian oligarchic corporate-controlled future, much like the one we live in now, it’s more than that. It transcends the definition of being just another science fiction movie and taps into one of the most powerful archetypes in the human psyche by relating the story of the death and rebirth of Officer Alex Murphy, a good cop who is also a husband and a father. Murphy could be any of us who are called upon by fate to become something greater than expected and sorely needed in the world. A symbol of justice and fair play. A mighty hero who lives for the ages.

The story takes place in the near future, which bears a strong resemblance to our reality today, Detroit is near bankruptcy and crime is rampant. This future gets depicted by the use of an ingenious device that shows the viewer snippets of television, both news, and commercials. These brief glimpses represent a world rapidly going to hell on multiple levels, both scary and amusing, reported by two talking heads devoid of any trace of sincerity or human emotion.

OCP (Omni Consumer Products), an amoral corporate entity, is ready to pounce and take over replacing many government functions with their private sector solutions to the city’s problems, including law enforcement. At a profit of course. The headquarters of the company is an imposing edifice, reminiscent of the Tyrell Building in Blade Runner.

Their plan is a cruel one that would destroy the old city and replace it with a shiny, newer, more antiseptic version they call Delta City, disenfranchising the city’s poor and working-class in the process and destroying their lives. Representing the corporate agenda is senior vice president Dick Jones (Ronny Cox at his sociopathic, evil best), who has a plan for modernizing law enforcement with the ED-209 law enforcement droid. This droid is a mechanical monster capable of deadly force. However, this plan gets put on the back burner by the company CEO, “the old man” (Dan O’Herlihy) when the droid’s prototype malfunctions and kills a board member in one of the movie’s most memorable scenes. After this messy mishap, it is decided to go with the different solution of using cyborg cops developed by Dick’s competitor Bob Morton (Miguel Ferrer). Things don’t end well for Bob after he crosses Dick because Dick is a dick.

We are introduced to Alex Murphy (Peter Weller) as he arrives at the police precinct in old Detroit, a new transfer. He is greeted by the sight of his new partner Anne Lewis (Nancy Allen) kicking the crap out of an unruly suspect. Lewis is a spitfire, strong, intelligent, capable, and not to be taken lightly. She’s a symbol of the new woman emerging in the ’80s and represents the zeitgeist of the decade.

The moments that lead to Murphy’s date with destiny unfold naturally in a story well told, each step leading to his fate relentlessly, and inevitably. Soon, the two get notified of a crime in progress, and responding, are immediately in pursuit of the gang responsible led by notorious cop-killer criminal Clarance Boddicker (Kurtwood Smith). They follow them to an abandoned industrial complex where they decide to confront the group without waiting for back up. After cornering two of the felons, Murphy suddenly finds himself surrounded by the rest of the gang.

Murphy is dead, and his body becomes the property of OCP. They use his remains as part of their cyborg cop program, and the film shows a series of nicely done first-person sequences depicting the project as it develops to its conclusion. RoboCop brings into focus questions regarding Murphy’s humanity, and things like his soul. Is he more man or machine? Despite his cyber upgrades, it is apparent he overcomes his programming and remains a man in his heart and at his core.

The first time we see RoboCop is a moment of legend. The sounds of his approaching footsteps in the precinct enhance the moment of his arrival in his new form. His appearance is the stuff of legends too; sleek and modern in appearance, reminiscent of what would be a very cool design for a futuristic tank with aerodynamic lines.

Weller deserves credit for the excellent movements he used that express and define the character as much as the suit does. An iconic figure that will live forever, in the hearts and minds of fans, and deserving of being memorialized in the science fiction hall of fame. A hero is born.

What follows is an escalating and marvelous series of situations designed to demonstrate what the new super-cop is capable of doing. At a shooting range, Robocop is shown to be capable of massive destruction with the machine-gun weapon included as part of his design. His ex-partner Lewis is present and is the only one that suspects her former partner and RoboCop are the same man, based on the gun twirling she witnessed him doing earlier. The new cyborg cop’s performance is remarkably effective, and he soon becomes a hero to citizens and cops alike and achieves rock star status with the press.

Later when he busts a coke lab with Boddicker in it, the criminal admits his connection to the sociopathic OCP executive Dick Jones. When he goes to arrest Jones Robocop is suddenly paralyzed and incapable of carrying out his duty.  The wily executive sabotaged the cyborg’s programming beforehand. Jones had the foresight to take steps to make himself untouchable by the cyborg.

At this point, he unleashes the Ed-209 on RoboCop to kill him, which it fails to do, in a short but memorable battle. Jones has also called the human cops to help him get rid of Murphy, and when an army of cops attacks him in the parking garage, he comes close to dying again at the hands of his peers. Lewis rescues her former partner. She has never stopped suspecting the cyborg is Murphy, and she still has his back like a good partner should. They retreat to the same industrial complex used earlier which now becomes the stage for the climactic showdown with Boddicker and his gang where Murphy and Lewis end the gangster’s careers in a final climactic battle.

The movie ends when Murphy once again confronts Jones in the boardroom of OCP and ends him with shots that cause his fall to his death in the streets far below.

This film is also full of legendary quotes such as “Thank you for your cooperation,” “I’d buy that for a dollar!” and “Dead or alive, you’re coming with me.”

Well received by audiences and critics alike, RoboCop received positive reviews. RoboCop was one of the best films of 1987. It spawned a franchise that included merchandise, two sequels, a television series, a remake, two animated tv shows, a television mini-series, video games, and several comic book adaptations/crossovers. This classic film only cost a modest $13 million to produce.