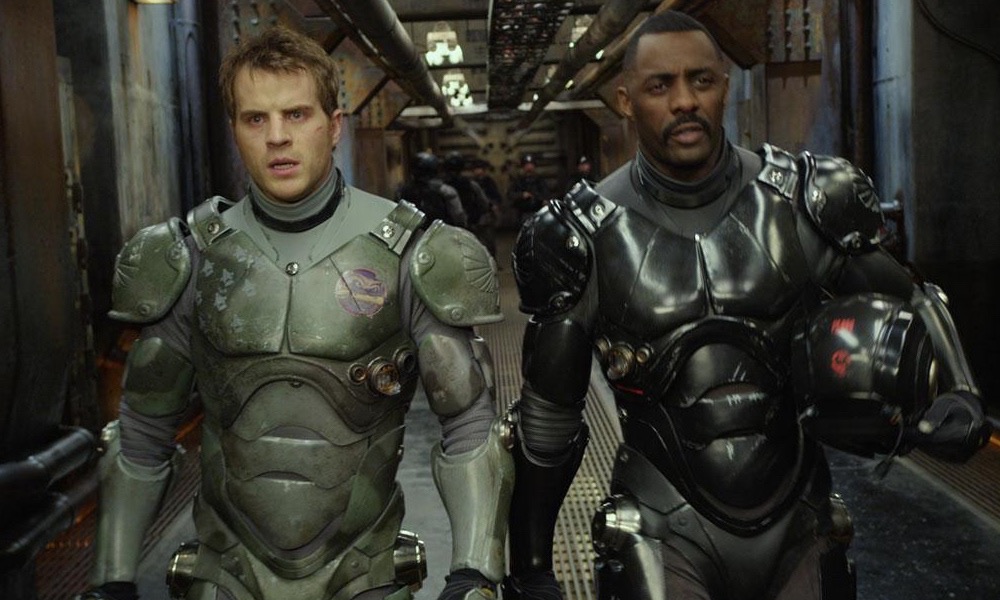 Guillermo del Toro’s enjoyable live-action tribute to the sub-genres of Japanese monster and mecha is action-packed fun, with a side of human drama.

This film represents a bit of a departure from del Toro’s usual monster/horror films, being more of an expedition into science fiction territory this time around, but there are still monsters aplenty  for this master of the genre to play around with in this production

The film is set in the near future when Earth is at war with the Kaiju; huge monsters later revealed to be cloned creations of an alien race, which have emerged from an interdimensional portal on the bottom of the Pacific Ocean. The screenplay does a great job telling a story that portrays a blend of monstrously large events, human drama, and suspense that includes occasional touches of humor.

Humanity unites to create the Jaegers, gigantic humanoid mechas each controlled by at least two pilots, whose minds are joined by a neural bridge.  The story follows Raleigh Becket, a washed-up Jaeger pilot called out of retirement and teamed with rookie pilot Mako Mori as part of a last-ditch effort to defeat the Kaiju.

The film’s ensemble cast is excellent and helps elevate this film above what might have ended up being a weaker version of what it is, a ‘B’ movie on steroids. The film’s ‘B’ movie type narrative tells an excellent and solidly enjoyable story that makes a fitting tribute to the sorts of stories told in the Japanese pop culture source it emulates.

The characters in this film are admittedly somewhat cliched and adhere to the types of characters often found in Japanese anime, without seeming overly two-dimensional or cartoonish. The stories the film’s narrative tells in its subplots are the stories of these characters.

The most memorable members of the cast are at the top of their game in this film and include; Idris Elba as Stacker Pentecost, the tough-minded commander of the Jaeger force, and the hero whose sacrifice saves humanity in the end. Also, there is Rinko Kikuchi as Mako Mori, his adopted daughter, whose family got killed in a Kaiju attack and whose life Stacker saved when she was a little girl, just before a Kaiju claimed her life too. Mako is an attractive and formidable symbol of feminine strength and durability.

Other characters of note and the actors that portray them are; Charlie Hunnam as Raleigh Becket who gets called out of retirement after losing his brother in an earlier battle with a Kaiju. Charlie Day as Dr. Newton Geiszler, a scientist studying the Kaiju, whose studies prove invaluable in defeating the monsters and the aliens that sent them. Ron Perlman as Hannibal Chau, a gangster and notable underworld figure who has established a business built around selling scavenged parts of Kaiju corpses, and accidentally plays a key role as part of the solution in defeating the monstrous Kaiju.

The human drama Pacific Rim portrays is a blend of adventure story, human cleverness in the face of desperate need, and heroic sacrifice that gives the film its heart and soul while managing to avoid the over-the-top melodrama often found in its animated counterparts. It’s the story of humanity at its best when nothing else will do.

Of course, this movie wouldn’t be as entertaining, or delightful, as it is without the arrival of the film’s epically dangerous, and formidable antagonists, the Kaiju. These monstrous creations are marvelously, and immensely large almost to the point of absurdity, and vastly destructive. Their presence and the resulting battles with the Jaegers provide the immense scale portrayed in the film’s events, like when a Jaeger uses a cargo ship to smash a Kaiju in the head.

Each creature demonstrates special abilities, like energy beamed from their eyes and mouths. These monsters show the ability to learn as they go through their various rampages, in their campaign to break the will of humanity and conquer the world.

Last, but not least, playing an essential role in this film are the immense humanoid exoskeleton devices known as Jaegers. These enormous contraptions and the pilots that drive them are what the story this film tells revolves around.  Piloting one of these machines is not as simple as getting in a car and driving it away. The two pilots required to operate these things have to create a neural link, not only with the machine, but also with each other, and function in unison for it to work.

The designs of the Jaegers are clever, inventive, and visually impressive, and do a great job in the task of successfully transferring the grand tradition of Mecha anime to live action.

The film is a wonderfully portrayed CGI-fest of these goliath mechanisms,  going into action and battling the gigantic organisms they oppose. I never once had a problem, in this film, with the suspension of disbelief thing that science fiction movies often require to enjoy them. It is well-done work, and this movie is literally, tons of fun.