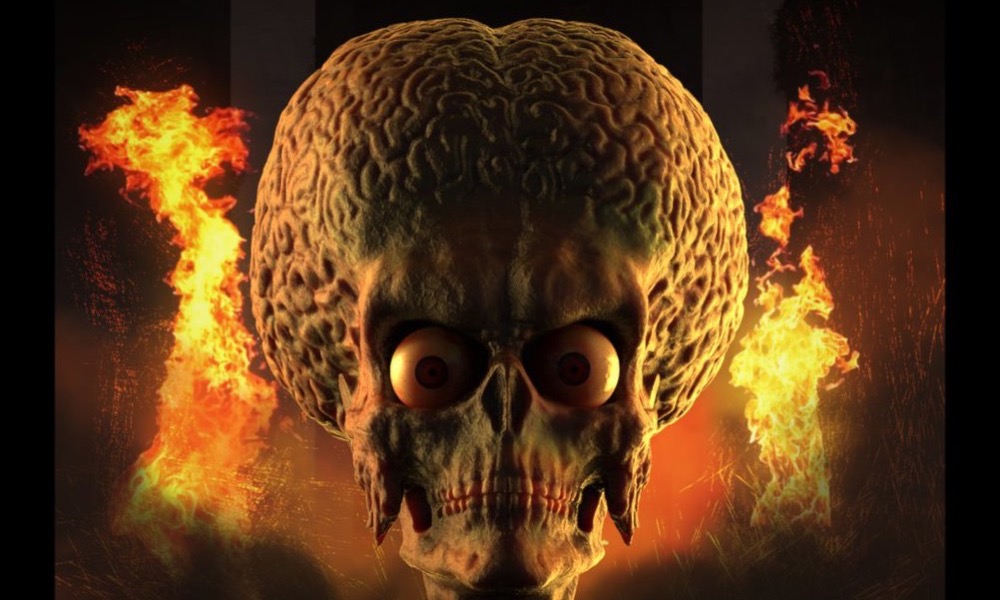 Tim Burton’s all-star tribute to the big cast comedies of the ’60s is also a brilliant and amusing tribute to Earth vs. The Flying Saucers (1956), filled with delightfully dark humor that never gets old.

Mars Attacks! is a 1996 American darkly comedic retro science fiction parody film directed by Tim Burton and written by Jonathan Gems. Based on the cult trading card series of the same name minus the punctuation. This movie also boasts a memorable, stylish, and stellar soundtrack composed by Danny Elfman.

The film’s narrative, set in a stylized representation of the seventies, which the presence of video games in its portrayal would suggest since no date is mentioned for when it takes place. Originally planned as using stop-motion animation, it ended up using CGI by Industrial Light And Magic for the Martians, their ships, and other effects.

It has been a while since I last watched this hilariously funny film, and revisiting it last night was a reminder how it hits the target at every turn in its mockery of every aspect of humanity. A humanity which deserves everything it gets in this film. Looking at the headlines in the news today, one wonders how some of this stuff is even possible. Just like in the movie, the answer is obvious, these people are idiots, and this film is a pointed satire of that idiocy, which relentlessly hammers that point home, so it is abundantly clear.

As mentioned earlier, this is an all-star comedy, similar in approach to the great, big cast ensemble comedies of the ’60s, like What’s New Pussycat? (1965), and Its A Mad, Mad, Mad, Mad World (1963). Only this one is funnier. Much funnier. It might be because the humor is darker and appeals to my dark nature more than it should, but whatever the reason, this is the first movie that had me laughing out loud in a long time.

The cast is superb, everyone is intentionally overacting, and also heavily cliched, and it works. It is well suited to the material about a bunch of Martian a-holes who show up loaded for bear with mean-spirited toys from some galactic novelty shop of horrors, all designed to kill in novel ways. The ray guns they use are deadly in their efficiency, reducing their targets to skeletons stripped entirely of flesh and consisting of nothing but smoldering bones.

The cast is a never-ending list of some of the top talents in movies from the time that produced it which includes Jack Nicholson, in a double role as POTUS, and a sleazy real estate mogul. Also appearing is Annette Benning as the shallow, trend following, rich man’s ditzy, alcoholic wife. The rest of the first family is portrayed by Glenn Close doing her best Nancy Reagan, and Natalie Portman as the first couple’s slightly rebellious teenage daughter. Lukas Haas as a teenaged, kind-hearted, doughnut shop employee from Hicksville, and Jack Black as his mentally deficient older brother. Michael J Fox and Sarah Jessica Parker appear as married media personalities. Especially amusing is Pierce Brosnan as the handsome, pipe-smoking, comically stereotyped, official White House scientist without a clue. Rod Steiger and Paul Winfield appear as top army generals with very different points of view. Also included is Martin Short as an entirely unsavory, and chronically horny sycophant of a White House press secretary. Rounding out the cast are Lisa Marie in a memorable role as a Martian version of an earth woman. Danny  DeVito as a random gambler, and, in some interesting, camp picks for supporting roles that provide added touches of charm and amusement to the movie, Tom Jones as himself, and Jim Brown as an ex-boxing champ, and Pam Greer as his divorced wife, and single working-class mom. There’s more, but suffice it to say everyone’s great in this. The film mostly depicts the cast as unmistakably, annoyingly, and embarrassingly American.

Of course, the Martians are maybe the most delightful part of the movie. Their ships and the look of the aliens themselves as they run around in their little spaceman outfits is memorable and a lot of fun. The effect of their appearance gets enhanced by their language which is composed of the simple repetitious utterances of the syllable Ack!

They are depicted as the equivalent of sociopathic, evil little 12-year-olds with a talent for mischief and experimentation, continually pushing the envelope to see just how far they can go. These experiments are bizarre and funny as hell as they go about their intentionally unnatural rearranging of things from the way they find them. There are so many great scenes in this film; it would require a book, or two, to describe them all in detail.

The Martians try the same bad jokes on the unsuspecting, and absurdly naive humans, over and over, getting the same results each time, much to their delight, which they express with cackling laughter. They have a nasty and dark sense of humor. After initially claiming to have come in peace, they kill everyone in the area with their deadly efficient weapons. They pull the same gag after claiming the first time was a simple misunderstanding, and manage to kill most of Congress. Later in the film, they are shown pulling the same gag again on the French with the same results. Their pranks on the clueless humans are, for the most part, fatal

After an unsuccessful attempt at a nuclear strike on the alien’s mothership, the Martians escalate their pranks to an all-out attack on the planet’s surface, killing everyone in sight, and destroying a great deal too, reducing the earth to chaos in their attacks. When they visit the rest home of some senior citizens and are about to use an absurdly large ray gun on Richie’s (Haas) grandmother, Florence (Sylvia Sidney). She unplugs the headphones she is using to listen to her favorite music. The music is the singing of Slim Whitman. Unplugging the headphones causes the music to be audible to the Martians in the room. Whitman’s song has the unexpected effect of causing the Martians a lot of discomfort and their heads to explode.

The highly amusing irony of something as innocuous as Slim Whitman music being a deadly response to these invading jerks is nothing less than marvelous. Word quickly spreads about the effects it has on the invading forces, and the aggressive attack is stopped dead in its tracks.

The story ends with humanity beginning to clean up and rebuild on the ruins left by the martian’s attack. In a final salute to the pop culture of the period it portrays, the final scene of the film depicts Tom Jones singing his pop music hit “It’s Not Unusual” in a final satirical setting of a Viewmaster style scene of him in a natural setting surrounded by forest creatures reminiscent of a Disney cartoon.

Watching this film again was a fun reminder it is one of the best science fiction comedies ever with only a few that come to mind that might qualify as being better. Great stuff from Tim Burton, and one of my favorite films by him in a career that has been somewhat hit or miss on occasion.