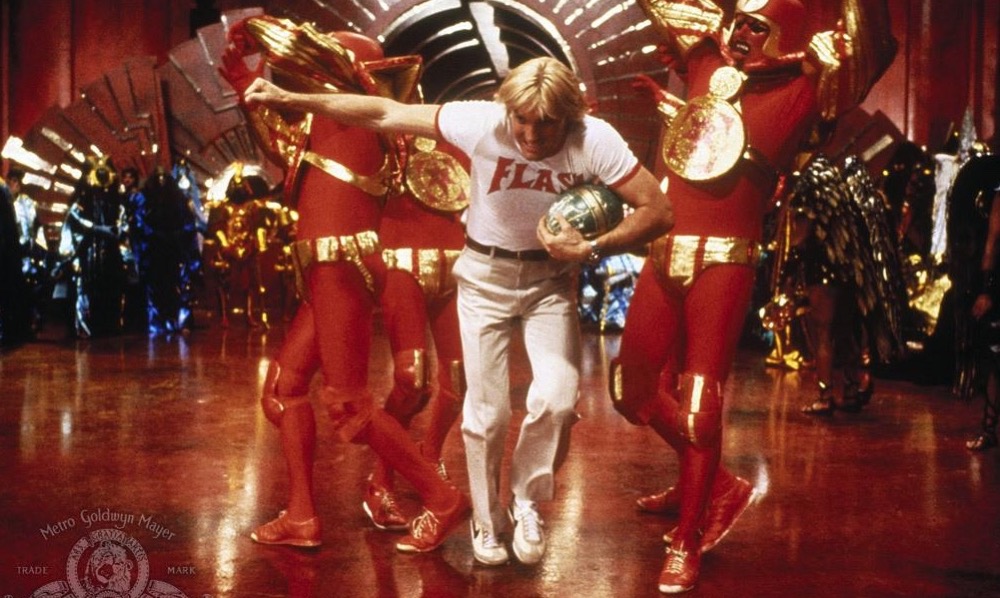 This cornball, camp, tongue-in-cheek, cult classic is still a lot of fun, although a bit silly at times.

The screenplay was written by Lorenzo Semple, Jr., with a story adaptation by Michael Allin. It intentionally uses an overboard camp style similar to the 1960s TV series Batman (for which Semple had prepared and written many episodes) in an attempt to appeal to fans of the original comics and serial films. Semple and Hodges don’t hold back here, and the only thing missing was the colorful depictions of onomatopoeia splashed across the screen.

This film is a no-holds-barred, relentless barrage of color and sound, in service to its camp portrayal of the 30’s comic strip it is based on, sometimes drifting into silly in pursuit of its goal. A good example of this is a memorable scene that takes place shortly after the arrival of Flash, Dale, and Zarkov in Ming’s court.

Flash takes exception to Ming’s desire to have Dale taken off somewhere for his pleasure, and the movie spends several minutes depicting him in a football-style fight with the palace guards. Dale breaks into a cheerleading routine during this struggle.

Flash has no chance against the overwhelming odds, but puts in a good showing for himself, before being carried off to be executed. Flash’s behavior shows he doesn’t have a lot of brains, but he sure has lots of heart, and his heart is what wins the princes of Mongol over to his side, in a revolt to overthrow Ming.

The cast likewise, is loads of fun with memorable cartoon-like performances all around. Flash Gordon is a hamfest of the sort that is only acceptable under the right circumstances, and it never seems out of place here. The film stops short of winking at the fourth wall, but it comes pretty darn close at times.

The cast of this movie is worthy of note. Max von Sydow is excellent as Emperor Ming, suitably sinister, dark, and arrogant, but never goes overboard in the role. Future James Bond, Timothy Dalton is just over-the-top enough as the heroic Prince Barin. Brian Blessed is enjoyably way over the top as Prince Vultan, leader of the Hawkmen, the winged warriors of Sky City.

Sam Jones always seemed like an odd choice, to me, for Flash, but he was good looking in those days, and they manage to make him look the part, while his bad acting in this seems to be part of the film’s parody approach. Topol is enjoyable as the eccentric Zarkov, And the ladies, Melody Anderson, and Ornella Muti alternately fill the roles of supplying sex appeal, being damsels in distress, and paragons of womanly strength when required. The supporting cast does a great job as well.

Of course, no mention of the film would be complete without acknowledging its soundtrack; composed, performed, and produced by the rock band Queen, with the instrumental sections by Howard Blake which combine to add the just the right amount of kick, background, and atmosphere to what occurs on the screen. The soundtrack elevates the film beyond what it might be otherwise.

This movie screams 80’s, from the old school practical special effects to the props, costumes, hairstyles, and makeup of the film’s actors. It’s a treat for the eyes,  and nothing is held back to make full use of the Technicolor for the movie. Fun is what they had in mind for this production, and it delivers in spades. It reminded me a lot of Barbarella (1968) in its approach, but unlike that film, the script delivers on the camp, tongue-in-cheek humor the earlier French film failed to.

Visually this movie is fantastic, the color schemes of the sets and costume designs are like something out of a 60’s psychedelic fantasy, incredibly garish in their opulence. The opening scene in Ming’s palace on Mongol looks like the aftermath of an explosion in a factory that makes Chinese New Years ornaments because there’s so much red and metallic gold. Everywhere you look over-the-top.

The spaceships, depiction of technology, and backgrounds are all also worthy of note. The spaceships, in particular, are beautifully designed art deco inspired stuff meant as a tribute to the era that gave birth to the iconic characters that dwell here.

The story is simple enough and adheres to the original. Ming starts messing with earth because he’s Ming. Zarkov is the only one that realizes someone is causing the weird weather and other problems we are experiencing here. Flash and Dale crash land near Zarkov’s lab just in time for Zarkov to kidnap them. Off they go to Mongol to see what’s up. Ming falls for Dale and tries to kill Flash, but Aura falls for Flash and saves him. Flash ends up uniting the princes of Mongol to join forces and revolt against Ming, and, oh yeah, saves the earth in the process. Whew.

Flash Gordon is not a film to be taken seriously, even a little, but 30+ years later it’s still a lot of fun when you’re in the mood for some camp and corny entertainment. It may be time to give this material another go; it might be interesting to see a more grounded,  21st-century treatment.