SCI-FI NERD – Demolition Man (1993): The Past Erupts In A Politically Correct Future 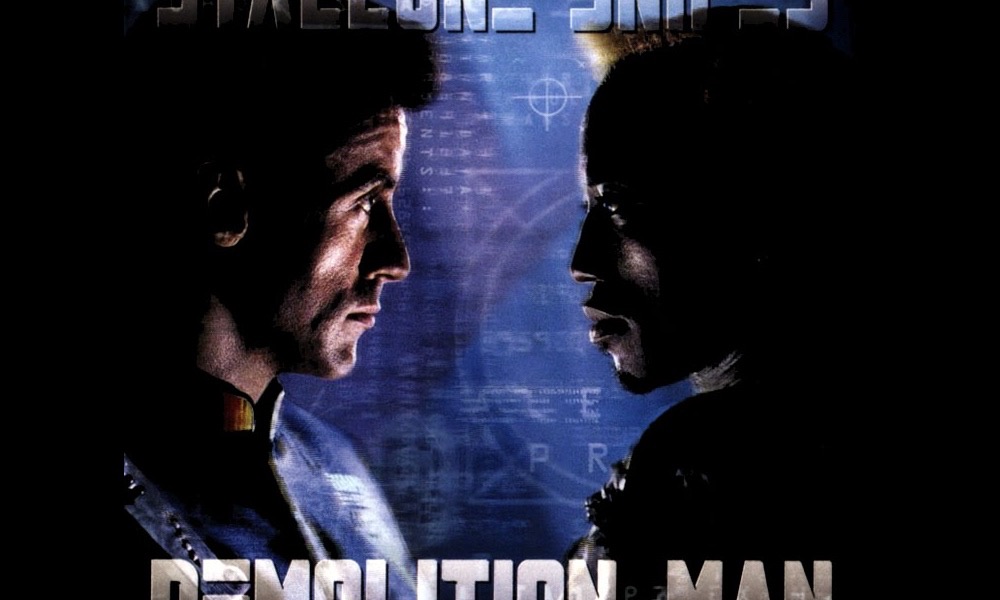 Wesley Snipes as Simon Pheonix is the best movie version of the Joker ever in this action-packed and amusing satire depicting an over-the-top politically correct future.

The future is ripe for the plucking as a result of going too far with political correctness and escaped prisoners are having a field day led by a remnant of the past subconsciously trained to navigate the world he awakes in while cryogenically frozen for 36 years, and John Spartan is just the cop to stop him.

That’s the premise Demolition Man is based on, and it works with often amusing results, as a classic fish-out-of-water tale and cutting social satire. The film is an examination of human nature and instinctual behavior vs. political climate and conditioning. Sylvester Stallone’s cliched macho portrayal of cop John Spartan is a classically amusing juxtaposition in contrast to an over-the-top politically correct future. In the past, Spartan gets framed by Simon Phoenix (Wesley Snipes) and cryogenically frozen for a crime he didn’t commit.

As the titular Demolition Man, he is as much a maniac as Phoenix but on the side of the law. He wakes up in the future of 2032 where things have changed quite a bit. Humor is implicit in his fish-out-of-water attempts to adjust to a future where political correctness has gone too far and transformed all of the men into wimps. This film is an action-packed thriller, but it is also an amusing, silly, sometimes biting social satire.

The cryogenic equipment is gigantic, its imposing machinery powerful, dramatic, and memorable, a reminder that the ideas that spring from our minds results in powerful technology, stronger than we are, and sometimes a little scary.

Snipes is both marvelous, and memorable in the role of Phoenix, in fact, this is the best movie version of the Joker, the iconic Batman villain, I can ever remember seeing, despite the fact this character is not meant actually to be the Joker. His overt psychotic behavior, maniacal laughter, hair, and attire are unmistakably reminiscent of the clown prince of crime. Snipes seems to be having a lot of fun portraying the colorful Pheonix, and his portrayal is loud, over-the-top, and reminiscent of a Looney Tunes cartoon character at times. His performance is one of the best things about this movie.

John Spartan is all man, a throwback to days gone by whose primal instincts, and imposing musculature are the only things that stand between Phoenix taking over entirely and the possibility of a return to normalcy in the future world. The problem is someone messed with the technology that rehabilitates frozen criminals and trains them subconsciously to be useful members of society after serving their time; they gave Phoenix skills that would enable him to thrive in the future, they gave Spartan skills to knit sweaters.

The man behind the situation is Dr. Raymond Cocteau (Nigel Hawthorne) worshipped as the savior of humanity, and responsible for all the political correctness, creating a hollow utopia that is a near fascist state. He is a passive aggressive asshole tyrant who has modeled the future on himself, impotent, metrosexual, pacifistic, and on the surface at least, antiseptic. He is trying to use Phoenix to eliminate Edgar Friendly (Denis Leary), the face of the underground and a thorn in his side who represents everything he is trying to get rid of in the world. Like a typical passive aggressive he is hostile towards anyone who doesn’t see things his way, wants to avoid confrontation himself, and have someone else do the dirty work.

Sandra Bullock as Lt Lenina Huxley is weirdly adorable in the film. She is cute and has the habit of misstating 20th-century colloquialisms. A student of the past century, Huxley is bored with her peaceful existence and has a romantic, and slightly inaccurate, view of the way things were in the past. She responds to her first taste of doing things old school in a way that shows she likes and is eager to embrace it. She becomes the romantic interest of Spartan and introduces him to the new way of having sex in 2032 – without touching.

The new way of having sex is just the tip of the iceberg regarding what Spartan needs to learn as far as acceptable behavior and how other things work in this future world. When he is confronted with nature’s call to relieve himself, he discovers the puzzling mystery of three seashells to deal with it. The seashells have no real function; it was just something the film’s writers whimsically created as part of the future as a joke. Spartan’s solution is to stand near a machine that monitors anything said in the police headquarters and then spits out citations for swearing. He intentionally swears until he has enough tickets to use for toilet paper.

This future world is not as perfect, and problem-free as it first appears. The future is still a world divided into the haves and the have-nots, and the have-nots have a world of their own. They live underground in the crumbling, and decayed remnants of the past the bright and antiseptic future conceals. The population of this subterranean world has found ways to improvise, scavenge and steal to survive, and squeeze out an existence which includes eating rat burgers for cuisine while the gleaming world above dines on the new haute cuisine of Pizza Hut and Taco Bell. Spartan connects with these throwbacks of humanity and their leader Friendly, and they end up being allies in his efforts to solve the problem of Phoenix and reign in his crime spree.

The story reaches its climax in the cryogenic prison where it began when Spartan and Phoenix have a final battle, which will not only decide their fates but help determine the course of the future of the world.

This film is fundamentally reworked western tropes as a science fiction story, but is still a fun ride, while sending a socially relevant message about choices we make now and how it could affect the future. Be careful what you wish for; it might come true.