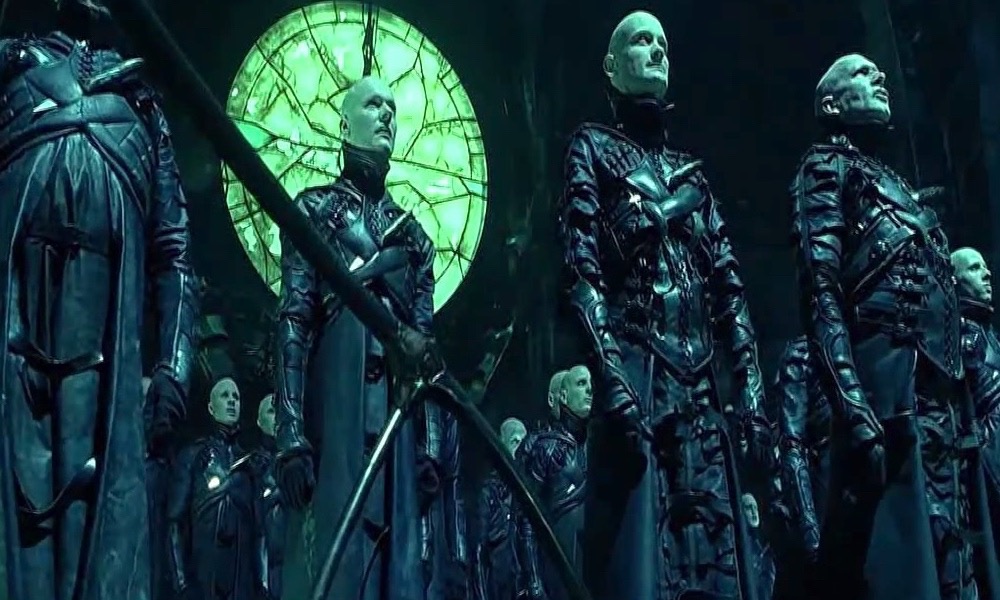 Trouble begins when one man discovers he’s on an alien spaceship where humans exist for experiments like rats in a maze.

Once again director Alex Proyas proves that when film noir and science fiction hook up its a marriage made in heaven. It occurred to me that while everybody has a pretty clear notion of what defines science fiction, some fans may not have a clear understanding of what defines film noir. One can get some idea of what film noir is by googling the term, and you will find something like this:

From Wikipedia: “Film Noir (/fɪlm nwɑr/; French pronunciation: [film nwaʁ]) is a cinematic term used primarily to describe stylish Hollywood crime dramas, particularly such that emphasize cynical attitudes and sexual motivations. Hollywood’s classic film noir period began extending from the early 1940s to the late 1950s. Film noir of this era is typical with a low-key black-and-white visual style that has roots in German Expressionist cinematography. Many of the prototypical stories and much of the attitude of classic noir derive from the hardboiled school of crime fiction that emerged in the United States during the Great Depression”.

Roger Ebert adds a historical footnote along with some tongue-in-cheek guidelines of what to look for: “A French term meaning “black film,” or film of the night, inspired by the Series Noir, a line of cheap paperbacks that translated hard-boiled American crime authors and found an enthused modern audience in France. A movie which at no time misleads you into thinking there is going to be a happy ending. Locations that reek of the night, of shadows, of alleys, of the back doors of fancy places, of apartment buildings with a high turnover rate, of taxi drivers and bartenders who have seen it all”.

While that’s all true, it doesn’t capture the essence of what film noir is. It’s about darkness, the darkness of shadows, a place without light (hope), paranoia, gloom, and the dark side of human nature about desperation and the feeling of having no choice. It’s cynicism, and pessimism being the driving force behind the mean-spirited behavior of people that under any circumstances would be difficult to like. Being in unpleasant situations with nasty people without any hope of escape It’s pretty depressing stuff, best hidden away from the light of day, and left in the darkness where it thrives.

Alex Proyas deftly manipulates light and shadow, along with some creative well placed camera angles to make this dark and shadowy film a near-perfect tribute to film noir that has a very suitable plot line to match: John Murdoch (Rufus Sewell) is an amnesiac man that finds himself suspected of murder. He attempts to discover his true identity and clear his name while eluding police and a group of people known only as the Strangers. Paranoid much? You bet.

Murdoch awakens alone in a bathtub in a seedy hotel room with amnesia. He has no idea how got here and what happened before he woke up. Reinforcing the paranoid theme of the story, he almost immediately receives a phone call from Dr. Daniel Schreber (Kiefer Sutherland, suitably weird and doing his best Peter Lorre impression), who urges him to flee the hotel to evade a group of men who are after him. During the phone talk, Murdoch discovers the corpse of a brutalized, ritualistically murdered woman, along with a bloody knife. He flees the scene, just as the group of dark clothed and menacing, creepy men (known as the Strangers) show up to investigate the room.

Eventually, Murdoch learns his name and finds he has a wife named Emma (Jennifer Connelly). She’s beautiful, and he falls in love with her all over again. He is also sought by police inspector Frank Bumstead (William Hurt) as a suspect in a series of murders committed around the city, though he cannot remember killing anybody. While being pursued by the Strangers, Murdoch discovers that he has mind powers, psychokinetic in nature, which the Strangers also possess, and refer to as “tuning,” and he manages to use these abilities to escape from them.

While exploring the city, he slowly comes to realizes it is always night, and at midnight when everything suddenly comes to a halt, and everyone but him falls asleep is when things get weird. There is a surreal, memorable, and remarkable twist to the story when the buildings begin to move, change and rearrange themselves while Murdoch holds on for dear life. Glimpses through windows afford a look while the Strangers change people’s identities and the circumstances they live in and accept as their lives. The actual nature of life in this unique dark city gets revealed; yesterday’s hotel clerk is suddenly a much more prosperous man, and strangers are now married couples. Nothing is real, as reality shifts into a different version of its former self. Friendships, identities and other formed relationships are illusions and vanish in moments.

Murdoch learns that he comes from a coastal town called Shell Beach, a town familiar to everyone, though nobody knows how to leave the city to travel there, and all of his attempts to arrive at Shell Beach end up failing. Curiouser and curiouser the city, and what happens in it, is the stuff of nightmares.

Eventually, Murdoch gets caught by Inspector Bumstead, who acknowledges he is innocent, and by then also has misgivings about the nature of the city. They join forces and together confront Dr. Schreber, who, in a twist strongly reminiscent of the Goa’uld of the Stargate series’, explains that the Strangers are endangered extraterrestrial parasites who use corpses as their hosts. Because they have a hive mind, the Strangers have been experimenting with humans to analyze their individuality in the hopes that some insight might reveal a solution that would help their race survive. Schreber explains that Murdoch is an anomaly who inadvertently awoke during one such midnight process when Schreber was in the middle of imprinting his latest identity as a murderer. It seems that fate has intervened.

The three embark on finding Shell Beach, but it exists only as a billboard on a wall at the edge of the city. Frustrated, Murdoch and Bumstead break through the wall, revealing outer space on the other side. The men encounter a group of the Strangers, who hold Emma hostage. In the ensuing fight, Bumstead and one of the Strangers fall through the hole, and free fall into outer space, revealing the city as an enormous space habitat surrounded by a force field.

The Strangers bring Murdoch to their home beneath the city and force Dr. Schreber to imprint Murdoch with their collective memory, believing him to be the final result of their experiments. Schreber betrays them by inserting false memories in Murdoch which artificially reestablish his childhood as years spent training and honing his psychokinetic skills and learning about the Strangers and their machines. Murdoch awakens,  and fully realizing his skills, frees himself and battles with the Strangers, defeating their leader Mr. Book (Ian Richardson) in an incredible psychokinetic fight high above the city.

Using his newly reinvigorated abilities, Murdoch changes the city and creates a version of Shell Beach that exists.   He opens the door leading out of the city and steps out to view the sunrise. Beyond him is a pier, where he finds the woman he knew as Emma, now with new memories and a new identity as Anna.

Hard to believe now, but this film, now considered one of the greatest science fiction cult classics ever was a box office bomb, upon its release in 1998, despite positive reviews from critics. Some critics have noted its similarities and possible influence on The Matrix series, which came out a year later.

Dark Cty is a terrific film, the Strangers are suitably creepy, they dress in long black coats and wear black hats like nightmarish morticians or goth drama queens from hell, and one is an even more disturbing child. Their menace is unmistakable and hasn’t diminished over the years since the movie’s release. There are few science fiction films done this well — a top-notch classic.

The film has one of the most excellent movie trailers ever: