Mad Max: Fury Road – The Evolution Of A Mythology 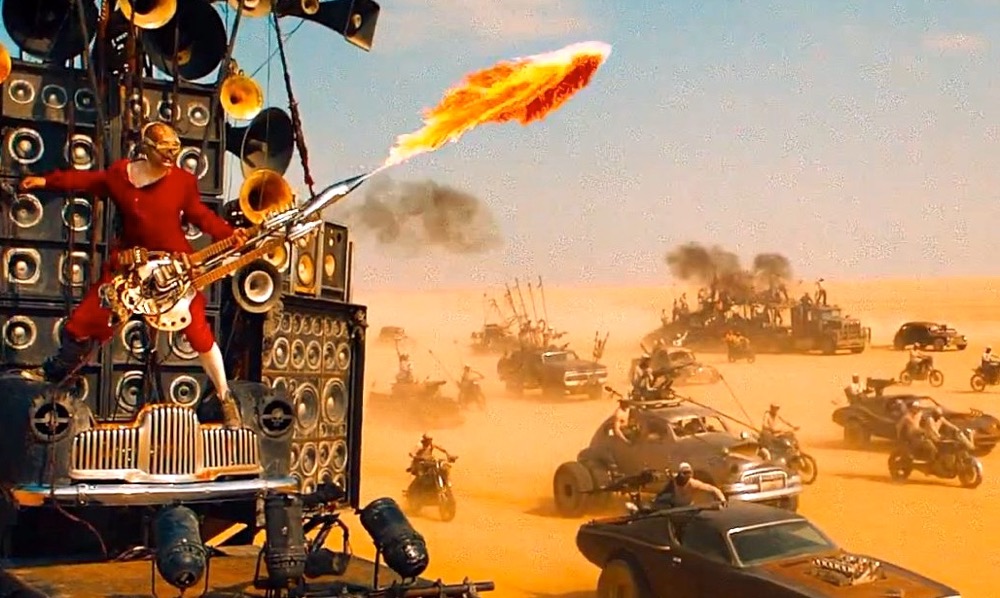 Mad Max: Fury Road is the most recent iteration of mythology, evolving for over thirty years.

Mad Max: Fury Road is a tremendously good adventure story with a heart that makes an enjoyable film. It represents work lovingly nurtured for nearly forty years in a sub-genre it practically invented. Co-written, co-produced, and directed by George Miller, who helped create the original action/adventure science-fiction- epic-in-a-post-apocalyptic-wasteland in which it takes place. This environment has become an often imitated iconic context often imitated but never equaled outside of the franchise.

Fury Road is a visual treat for the eyes made even more appealing by its cast that provides some of its most engaging, thrilling, and amusing moments. Charlize Theron practically steals the show as the tough-yet-vulnerable bionically enhanced amputee Imperator Furiosa, lieutenant to the bizarre Immortan’ Joe who oddly reminded me a lot of genre regular Richard Lynch. Also noteworthy was a memorable performance by Nicholas Hoult as ‘War Boy’ Nux and the rest of the ‘War Boys,’ portrayed as crazed with religious fervor.

The film’s narrative works on so many primal archetypal levels; it’s nearly impossible to recount them all without leaving something out, even more than its predecessors. The latest version, Fury Road is by far the most sophisticated of the four films. While The Road Warrior (1981) and the too-cutesy Mad Max: Beyond Thunderdome (1985) touched on some of the anthropological themes of a future society, Fury Road finally seemed to delve into enough distasteful and unsavory details to capture a grim and gritty future world and bring it to life. A world that still allows humans to survive in tribal groups, complete with the perennial haves and have-nots that have marked human society since before recorded history.

Like most genre stories, the narrative of Fury Road is a story about the human condition. It plays on themes revolving around our need to survive and our need to live in tribal groups. The anthropological drives control our behavior for the most part. Human nature makes demands on us more than we usually think about or sometimes even realize.

The basic story of good vs. evil is still there, with Tom Hardy portraying the lone wolf road warrior Max Rockatansky. Although he’s not above doing whatever it takes to survive, he still lives by a code that represents what little remains of treating others civilly. For the most part, the rest of humanity are now creatures reduced to animal behavior. He’s up against Immortan’ Joe, a heartless tyrant who is also the leader of his religious cult, a cult that is willing to kill and die for him, a religion loosely based on the beliefs of ancient Norse mythology.

Our relationship with technology is still a big part of the story this time around. After all, what’s a Mad Max movie without the cars and other inventive vehicles of the future? As always, after setting up the premise, a battle over controlling limited resources, that serves as the basis of the narrative, the film becomes one long chase scene. That’s something I often have wondered about regarding how a movie that’s one long chase scene work so well? It comes down to depending on suspense and thrills along the way, of course, while also subtly tapping into the old hunter-prey primal theme, a theme so profoundly embedded in our psyches as human beings, it will never go away. Against the backdrop of the desert-like wasteland, it becomes a question of who will survive and triumph or die and lose. This underlying theme still works to hold an audience’s interest,

The pace of this film is relentless with action that seems never to pause except briefly. The stunts and camera work are brilliant and play a significant role in contributing a great deal to its appeal; There is hardly any CGI use. Almost the entire collection of FX in the film is of the practical sort.

It’s little wonder some still consider this movie to be the best film of 2015, and it very well may be.

One thought on “Mad Max: Fury Road – The Evolution Of A Mythology”