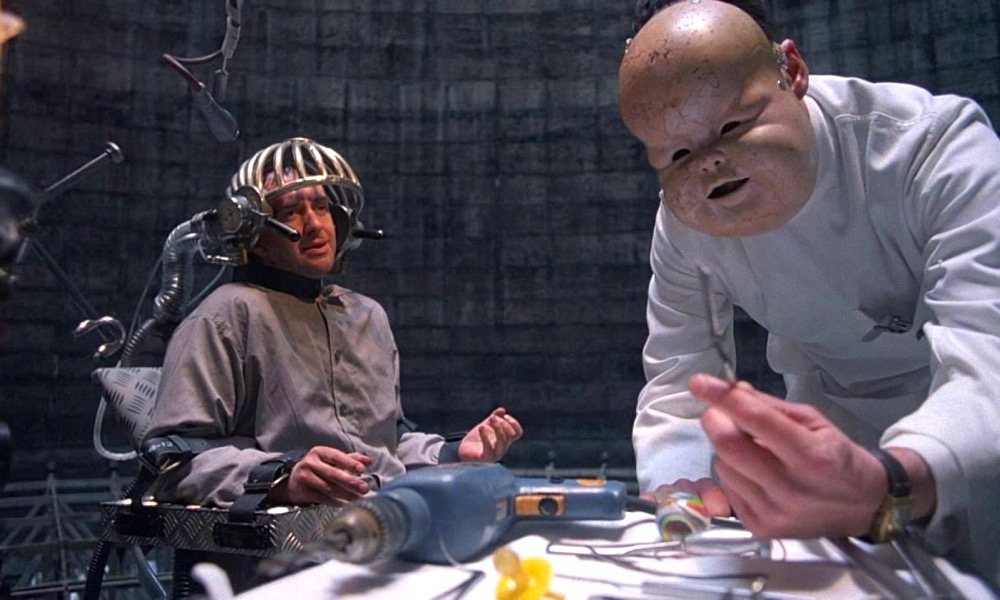 Science fiction can sometimes serve as a useful device in several ways beyond simple story-telling. One common way it’s useful is to act as a mirror so we can see ourselves and where we are going more clearly by prophesizing the future to some degree. Science fiction can serve as a warning to change course, the way we do things, or even the ways we think about our approach to life. Some examples of stories that serve well in this manner are George Orwell’s “1984”, and Aldous Huxley’s “Brave New World.”

Terry Gilliam’s Brazil ranks high among these types of films. Brazil is a 1985 dystopian science fiction film directed by Terry Gilliam and written by Gilliam, Charles McKeown, and Tom Stoppard. The film stars Jonathan Pryce and features Robert De Nero, Kim Greist, Michael Palin, Kathrine Helmond, Bob Hoskins, and Ian Holm. Gilliam’s brilliant satire is eerily accurate in this way. His vision of the future awaiting us portrays a world turned upside down in a smothering fascist bureaucracy crushed by the weight of its bloated scale. It is one of the most genuinely frightening visions of a future dystopia ever put on film.

That said, it’s also a very darkly amusing and nightmarish social satire. Brazil amusingly exploits the absurdities of what we endure and impose upon ourselves in an attempt make our world a place that adheres to the ideal of modern civilization that best benefits everyone equally. Or, in this case, even if it kills the very ones, it is designed to benefit. Somewhere along the way, common sense took a holiday and never came back.

This world is literally upside-down, expressed in Gilliam’s delightful talent for visual humor by having the women wear hats that strongly resemble shoes. The director’s sense of visual humor is almost unparalleled, and he goes to town here. It’s a dreary world, from claustrophobic offices and living spaces to the absurd gigantic gothic structures that house the bloated Ministry Of Information that controls everything. His vision of the future is a creation that screams for a morsel of grass or a tree. Something to remind us of the world that somehow got left behind and was replaced by an unsolvable tangle of pipes and ducts that are omnipresent and never-ending.

To demonstrate how messed up this tangled web of a future is Gilliam’s story has the whole setup nearly toppled by a single bug that gets caught in the machinery of the great state that not only ruins the lives of several people. It also leads to the eventual insanity of the lead protagonist Sam Lowrey (Pryce). He is assigned to deal with the death caused by the errant fly in the machine, and when he does, he meets the girl of his fantasies. Tragically, this only serves to push him a little closer to plummeting off the edge of sanity.

Like the saying says, ‘when you can’t beat them join them.’ In a world gone insane what better way to deal with it than by going insane yourself? Gillim seems to be implying this might be the only cure or at least, means of escape. The film is rich with memorable scenes that remain etched in your brain after viewing this enduring classic.

For example, the opening sequence that goes through the massively large offices of the Ministry. Sam’s encounter with a couple of sadistic government repairmen that arrive when he calls for help with is air conditioning. They give him the business because the renegade air conditioning specialist Tuttle (De Niro) fixes it for him and that causes a real stink in more ways than one. Another is when Sam is dining out with his wealthy mother, and there is a terrorist attack during their meal, that they hardly seem to notice.

As Sam’s break from reality deepens, it becomes more difficult to know what is occurring in fact and what are hallucinations. Some of the film’s most memorable scenes are Sam’s daydreams about saving the damsel in distress he fantasizes about on a regular basis; he adopts the persona of a heroic battle angel that fights with dark demonic figures. Gilliam excels at depicting the stuff of dreams. The entire film is a visual treat.

Brazil is not only a darkly amusing and excellent social satire it also speaks to the human condition and the possibility that sometimes the solution to our problems might be easier if we would stop letting progress and ourselves get in the way.