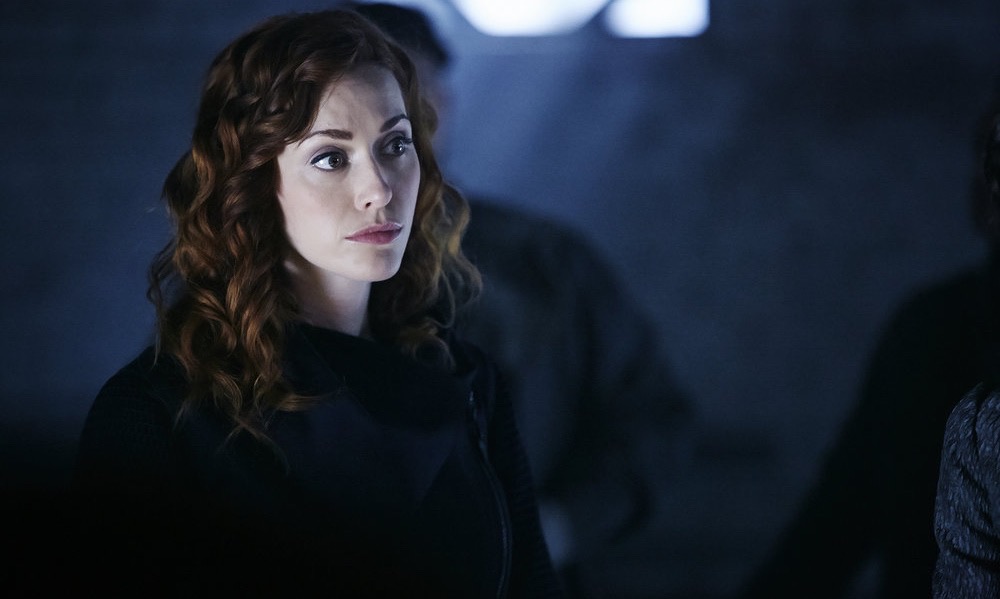 The party’s over, the wall comes down, riots ensue, and the price of freedom for Westerly is higher than expected.

The sign of a good show is when it ends faster than you expect, because you’re enjoying it so much, you lose track of time. Conversely, if a show isn’t that great, you keep checking the clock to see how much longer its going to last. The most recent episode of Killjoys falls into the latter category. It wasn’t that it was terrible, it just seemed to drag on for me longer than it should.

It had plenty of action, an eventful story that actually had developments that moved it right along. That’s the thing about this series it has ll the elements in place designed to make what should add up to an entertaining and enjoyable genre story, but somehow, somewhere something gets loss in translation, for me at least.

Its just that it didn’t interest me all that much. It had the usual amount of foul language which this show uses to prove how adult, and cool it is, but it takes more than that to make a favorable impression on an old jaded science fiction fan like me. As half of Syfy’s sci-fi Friday, this show suffers by being in such close juxtaposition with Dark Matter, which is a much better show, not only because its more appealing in the stories it tells, but the characters are more appealing and engaging too.

Sorry, I know, apples and oranges, but its really impossible to not compare the two shows since they do air so close together, and appear on the same channel. The fact is they are designed to appeal to two different audiences and while I find the one gets me pumped for science fiction adventure, the other often leaves me with a reaction of meh. I have tried to figure out exactly why that is, but the specific answer eludes me. I can speak only in the broader terms of better characters,  better stories, and better writing.

Here’s the recap, laced as usual with some comments (*warning, spoilers follow*)

The episode begins with shots of the streets of Westerly, chaotically strewn with the bodies of some of the locals, all of whom seem to be dead. Its a solemn scene, as its meant to be. Its a far cry from the way things were at the end of last week’s episode where everyone was high as a kite, like a latter day version of Land of the Lotus Eaters resulting from the influence of the wall, which had its setting turned up by Jelco (Pascal Langdale), at the orders of Delle Seyah Kendra (Mayko Nguyen), the series villains, or at least the face of the company, which seems to be pretty evil.

We find Dutch in a poorly lit small featureless cellar room. She’s sitting on the floor and wearing handcuffs. They’re not just regular handcuffs, but futuristic high tech cuffs that can give the wearer unpleasant shocks, as we soon find out when her captor arrives with some water for her. He takes her out of her makeshift prison for some interrogation in the Royale. there’s riots going on outside because they’re not letting anyone in to get drunk or whatever.

The guy in charge is named Herin (Stuart Hughes), the self proclaimed leader of the revolution, although he had little to do with things changing in Westerly. He’s serious as death in his pursuit of what he wants to know, which is, where’s Jelco? Pree is there, and makes a play to save Dutch, but she talks him out of it because they wouldn’t get far before being killed.

Of course Dutch is not taking being treated in this fashion well and only giving her captor sarcastic and unpleasant responses to his questions, and its soon revealed he put something in her water that makes her puke blood if she utters anything untrue in her responses to his questions, which means we get treated to lots of shots of her puking up blood in the episode. Now that’s entertainment.

Flashback to the previous day, and we see Dutch and Da’vin in a bar where they find Johnny and Pawter having a good time, feeling high and silly from the effects of the wall. Dutch apologizes and then shoots them both, in order to stun them and return them to Lucy so she can bring them back to their senses with a burst of high pitched sound to counteract the wall’s effects on them.

Johny and Pawter tell them all about the food being poisoned and the company’s plan to weed out parts of the population, while turning the rest into slave labor, and they all gear up for a raid on Spring Hill to get Jelco and bring down the wall.

They stealthily enter the place, but run into technical difficulties when the AI they encounter in charge of the controls, proves more difficult than anticipated to override. Johnny finally introduces a portable version of Lucy into the company computer, which acts like a virus and takes over.

When Pawter tries to shut down the wall  she fails at first, setting off an alarm that notifies Jelco they have invaded his offices, and a holographic image of him appears. They exchange comments briefly before he orders some company soldiers dispatched to get rid of them.

They track down Jelco’s location, and Dutch and Da’vin engage in a long drawn out battle with the security forces that arrive, before leaving to find Jelco.

This leaves Johnny and Pawter at the offices, and she goes on the company PA system to warn the people of Westerly about the poisoned rations, but she is still unable to shut down the wall completely.

Pawter hits upon a plan to turn the wall up even higher which seems to have an irritating frenzy-inducing effect on people who in turn charge the wall which kills them on contact, but after about a hundred of them die, the wall finally overloads and comes down. Patter got the results he wanted, but at a cost that leaves her shaken to the core. She only wanted to help the people of Westerly, but ended up killing a lot of them instead to accomplish her goal to save them.

Meanwhile Dutch and Da’vin locate Jelco and capture him, with the intent of killing the weasel and ridding Westerly of him forever, but there’s just one catch, they find a lab on the way with lots of the green plasma, and Jelco says he knows where’s there more, lots more. So they trade him his life in exchange for the location of the really dangerous green stuff.

Just as they are about leave, some rioters from Westerly arrive, and Dutch sacrifices her self  to delay them so Da’vin can escape with Jelco to go destroy the plasma. She is captured by the rioters, but Da’vin escapes with Jelco,

They go to the criminal encampment, outside of town, we have seen before, with the fat lady in charge, and make a deal to use a futuristic rocket launcher she has to  destroy the evil green slime. Meanwhile back at the Royale, Johnny has arrived on the scene to save Dutch. There’s no explanation how he got past the rioters outside the place, or how he got inside without being shot or killed by the guards, but he’s there and we’re just suppose to accept it.

Any way just as things begin to look like there’s no way Dutch is going to survive, Delle shows up with a bunch of scarback monks and says she’s there to negotiate for independence for Westerly.

So they all sit down, and Delle is not happy about Pawter ruining her plans and costing the company trillions with her meddling. they go to sign an agreement which traditionally calls for the well used trope of slicing open their hands with a knife, because blood is thicker than ink or something like that, when Delle takes the knife and plunges it into the belly of Pawter who falls on the floor and begins bleeding profusely. She orders the monks to kill everyone else,  and a big fight breaks out.

Johnny, of course, is freaking out and is bent over Pawter helplessly watching her bleed out on the floor, while Dutch an Da’vin are fighting for their lives agains the scarbacks, Da’vin grabs Johnny and telles him they have to leave, and is finally forced to knock him out to get him out of there, leaving Pawter bleeding on the floor. Afterwards Delle uses the same Pa system to tell lies about the circumstances of Pawter’s death and pledges to honor her life going forward. What a bitch.

The Killjoys return to Lucy only to be confronted by Fancy Lee (Sean Baek) who reports he let Khlyen go, and he teases they have to go with him to find out why, and learn the truth about what’s going on. That’s how the episode ends.

So there you have it, another episode with some very dramatic moments that still left me less than enthused about this show. The episode was lacking in the snappy dialogue it sometimes manages to muster, but that not why it failed to impress me.

This show just leaves me flat, and as I have said before I’m not sure why. The one extended action scene this time around seemed like it was based on a first shooter video game, designed for kids. I think it was supposed to impress by showing off Da’vin’s soldiering skills, but left me wondering why it was dragged out for so long, and  the only reason I could think of why they would do that, was to eat up some of the episode’s allotted time, to make up for lack of story to fill it other wise. With only four episodes left in the season, I would expect the series to put forward some of its best stuff in terms of story telling in the season’s final episodes. Let’s hope that’s the case. Better luck next time. Happy viewing.