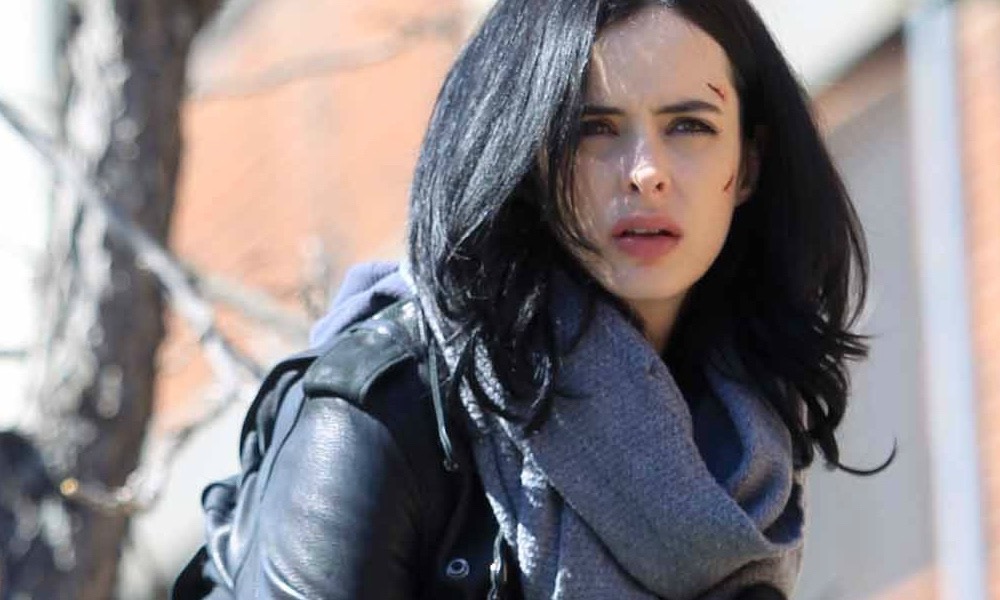 Okay, I admit I spent the last few days watching the entire first season of the new Netflix/Marvel production of Jessica Jones, featuring Krysten Ritter in the titular role, and here are some thoughts. (spoiler free for the most part)

This series is dark, very dark, along the lines of a Tennessee Williams play with unpleasant people in unpleasant situations, except a lot more violent. It’s also somewhat reminiscent of Zack Snyder’s 2009 Watchmen but without the costumes. This world, with only a few exceptions, is almost entirely populated by characters with little in the way of redeeming qualities, including the misanthropic title character. People swear a lot (but I don’t recall anyone dropping the F-bomb), and are unkind towards others. The swearing is one of the ways the series seems determined to remind us repeatedly this is meant to target an adult audience. The setting is in an over-the-top seedy version of Hell’s Kitchen, NY, NY. I had to take multiple breaks while watching it because it’s a little depressing seeing the worst humanity has to offer depicted in this way without occasional relief of some kind. Watching this series has the same sort of fascination as seeing a car wreck, but some things give the show some entertaining appeal. The acting is well done and believable, and the dialogue, which, in places, is downright amusing, and a couple of times made me laugh out loud.

Krysten Ritter in the role is well suited for the part of the rough- around-the-edges, antagonistic, foul mouthed, tough-as-nails, hard drinking private eye with superhuman strength. Her dark hair and pale skin help lend her the look of a compilation biker chick/ punk rock/goth girl, and the ever-present tight fitting, distressed jeans, parade of tee-shirts, leather jacket, and  Dr. Martins give her the look of a poster girl for the 90’s. Also her always full red lips send an anthropological message that’s hard to miss. Jones is the 21st century updated edition of the alcoholic private eye trope made famous by Dashiell Hammett,  Raymond  Chandler and later, Micky Spillane. The result of all this is, in an odd way she’s hot, despite her caustic personality and tendency to deal with most of what life puts in her path with violence. You know she’s bad news, but somehow that’s got its perverse sort of appeal.

There are a limited number of people Jones encounters and interacts with in the dreary world she inhabits. Among them are a couple of friends she still hasn’t managed to drive away. One is her adopted sister Trish Walker (Rachael Taylor), who is an ex-child tv star and present day radio talk show host. It seems at first Trish is her only friend and the only one that understands Jones, and one of the few that is aware of her special abilities. They have an almost brutally honest relationship and pull no punches when talking about their lives and relationship. This rapport is, in a way, enviable, and refreshing to witness.

There are a couple of cops who get involved in the situation also. One is named Simpson (Will Traval) , and the other is Detective Oscar Clemons (Clarke Peters). They both play a role in the unfolding story.

There is also Luke Cage (Mike Colter), who Jones meets through a case she gets by way of a jealous husband who wants her to follow and surveil his cheating wife, who is fooling around with Cage, who doesn’t know she is married. Cage is a huge muscular black stud portrayed as intelligent, well spoken, straight forward, loyal and brave. Jones soon discovers he has abilities similar to her own–unbreakable skin and superhuman strength, The two become acquainted and soon become involved in a dysfunctional, sexual relationship, because that is the only kind of relationship Jones can manage to have.

There are others in this story too, a couple of noteworthy neighbors, among them a junkie named Malcolm Ducasse (Eka Darville), and Robyn (Colbie Minifie) who become parts of different subplots, and a lawyer named Jeri Hogarth (Carrie Ann Moss) who Jones gets work from on occasion. Hogarth is a lesbian who becomes the focus of a melodramatic extended subplot involving her personal life and relationships. This aspect of the series felt like blatant pandering to the gay market. Hogarth turns out to be an opportunistic sociopath who is selfish and unfeeling. Moss is memorable in the role.

All this leads up to the big bad of the show known as Killgrave (David Tennant) who comic book fans will recognize as the Purple Man who I first saw as a character in the early Daredevil comics. He has the unusual ability to get anybody to comply with anything he asks them to do, no matter what it is, including things that go against their nature and may cause them harm or even death. This ability is a passive aggressive’s dream come true, and Tennant plays it to the hilt as a misanthropic, misogynistic, and sadistic spoiled brat of a villain.

I like the show but would like to qualify that statement with some additional comments/questions. Why am I, as the viewer shown shots of Ritter’s ample posterior so often? I’m not complaining, but I can’t in recent memory recall any other series that features shots of the main character’s butt so frequently portrayed, and I am fairly sure no other comic based movie or series has ever indulged in this sort of rear-end dominated camera work. Another issue is the sensationalistic nature of the show, from the shameless pandering to the lesbian demographic that has no relevance to the story as a whole. To the graphically portrayed “R” rated sex scenes, that take place between Cage and Jones, and are a sort of wink to  HBO, acknowledging the success of GoT. These things seem overly self-indulgent. Not to mention the plethora of sensationalistic graphically portrayed physical violence and portrayals of violent death. We get it okay? You don’t have to remind us again every few minutes.

I have seen articles regarding this show that indicate it’s an instant hit, with words like addicting and awesome used. I wouldn’t go that far, but it did make a lasting impression, and it was an oddly entertaining sort of series to watch.

Jessica Jones Season 2. Netflix quickly ordered another season of the show after the first received universal critical acclaim, but the precise timing of the new season is complicated by Marvel TV’s ambitious plans. Before jumping back into Jessica Jones, Ritter has to report for duty for the team-up series The Defenders, which finds the individual heroes of Jessica Jones, Daredevil, Luke Cage, and Iron Fist coming together Avengers-style to defeat some larger threat.

There was a teaser released for Iron Fist at SDCC 2016, along with a trailer for Luke Cage, which as fans know is Jessica’s partner, and love interest going forward. So to some degree, the two series are linked, and it’s likely we’ll see Jessica on screen again before the second season of her series on Luke Cage, and we’ll see her in the Defenders season one. I have added the SDCC videos, which you can see here below.