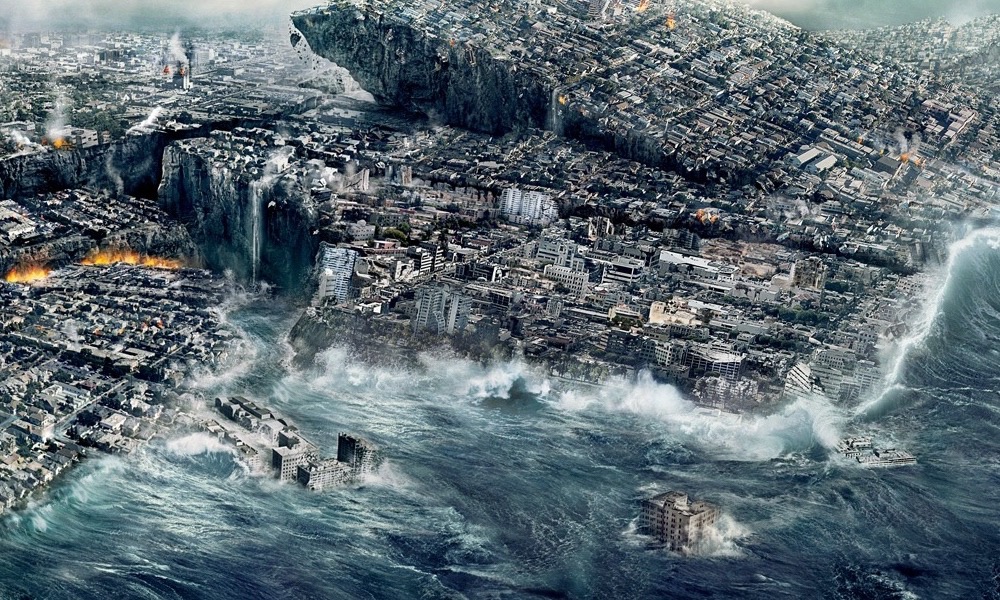 2012 is not great, sophisticated filmmaking of the sort that wins awards. It is a dark fairy-tale-type fantasy that depicts the end of the world as we know it is a constant, nearly inescapable shifting of the earth’s surface. To portray these world-ending events required a barrage, a frenzy of CGI images depicting destruction on a monumental scale. If that sounds like a one-trick pony, it is; but Emmerich is smart enough to supply the madcap odyssey of one family’s struggle for survival with interesting enough characters and events along the way to keep us distracted from that fact. We’re talking destruction of biblical proportions, old testament style, brought to life for entertainment, and entertaining it is.

This film seems like Emmerich is attempting to improve and a better tribute that is more epic in scope to the disaster movies of the past, bringing to mind the films of Irwin Allen and the all-star ensemble movies of the fifties and sixties, and he mostly succeeds.

I enjoyed this movie. Read on, and I will attempt to explain why.

2012 is pure escapism in film form, a sometimes jaw-dropping, dazzling, and spectacular orgy of destruction that surpasses anything previously seen on the silver screen. It’s portraying the end of the world, and visually, it’s a hell of a show. Intellectual engagement is almost always something I require to enjoy a film, but sometimes a more visual wild ride can be just as satisfying. This movie is a hoot, and although it got mixed reviews, it’s a film I always enjoy whenever I watch it again. It’s one of my favorite guilty pleasures. The story, of course, is based on the discovery of an ancient Mayan calendar that abruptly ends with the year of the movie’s title, which some have translated as meaning said calendar predicts the end of the world.

The movie starts with a visit with some scientists, who have discovered there’s something unprecedented going on. Violent solar storms have caused neutrinos to mutate into particles with mass, and they are behaving like microwaves and heating the earth’s core, freeing the earth’s mantle to shift. Combined with a planetary alignment, this spells doom for humanity and marks the end of the world as we know it.

This preface spins out just enough well-spun science gobbledygook to give what follows credibility. What follows is a procession of violent geological events that will leave the world transformed in a manner it has never experienced before. The film focuses on one family and their attempts to outrun the massive destruction. 2012 becomes a non-stop chase scene as they barely escape the apocalyptic events nipping at their heels.

Amidst the chaos that ensues, the film narrows its focus on the stories of just a few people going through this planet-wide event. 2012 mostly accomplishes the goal of getting us to care about the characters we meet along the way, in subplots that some of them do not survive, and by doing that, it succeeds in giving the story a human face and makes it more relatable. A big part of what makes this movie is enjoyable is its cast and the sometimes brief acquaintances we make with the characters they portray. 2012 makes the most of each and the drama or humor they contribute to the human tapestry the film creates.

Emmerich has a real talent for bringing out and focusing on the human elements in his films and is one of the main reasons his well-known film Independence Day (aka ID4 – 1996) works as well as it does. He pulls out every piece of cornball stuff he can, and for the most part, he makes it work. Within the context of this film’s dark and grim events are themes about human nature and a reminder that life goes on, no matter what. It’s pure corn, but sometimes corn is good.

Along the way, we learn about a top-secret plan to deal with events like these, should they occur. Of course, this is something put in place for the privileged rich and power to take advantage of, and everyone else is on their own. This revelation adds a needed science fiction element to the story that rescues it from being a pointless CGI exercise in pure destruction and a race against time with little chance of survival. It adds the possibility of relief and an opportunity for survival from the otherwise inescapable destruction hounding the survivors.

As this part of the narrative develops, it reveals some massive ships in China, arks built to save and preserve parts of the world deemed significant enough to qualify. Things like great works of art and even some animal species are shown being given a spot on these arks. It’s an attempt not just to save the best of humanity but to save as much as possible of the entire world and all of its biodiversity. All this is waiting for those lucky enough to have a seat.

There is also an element of class warfare introduced towards the end of the film, and it segues temporarily into a philosophical discussion about what makes us human. It helps emphasize the human aspect of the story.

So, in its final stages, this story becomes the old story of technology vs. nature. This time around, despite nature scoring a TKO, it ends with a beaten human race limping home, having learned some tough lessons, with a chance to start over again, and finishes on a note of hope for the future and an opportunity for a new beginning.

I would have to agree with a lot of critics, this is not film making’s finest hour, but it is a very entertaining movie, and a lot of fun for when you happen to be in the mood for some relentless, mindless destruction on a level that spells the end of the world. It’s a hell of a show.