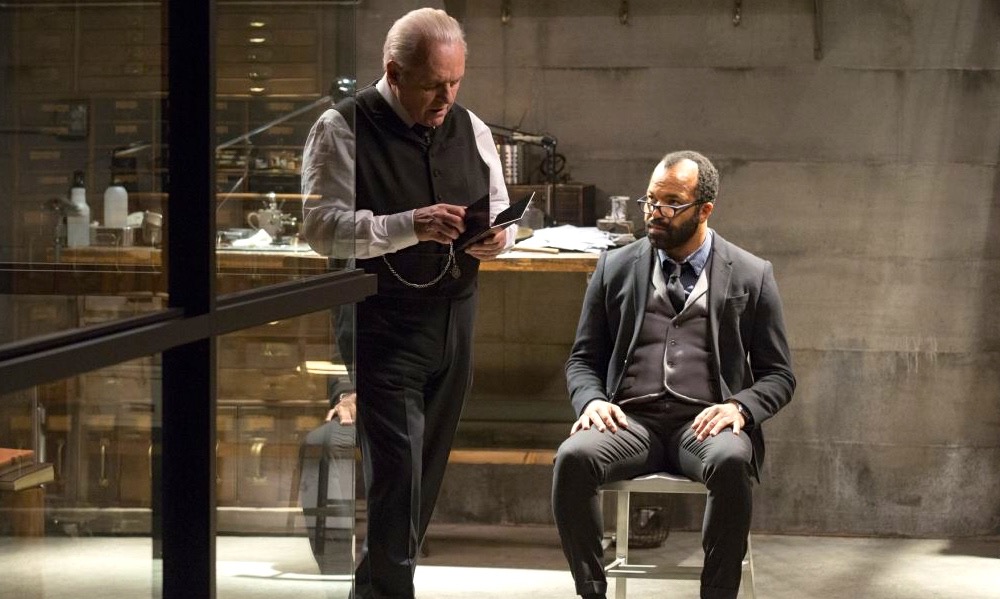 The next to the last episode of the season was a fountain of revelations that made it apparent it was, as I suspected it might be, entirely an appetizer leading up to the second course next season.

Grim, grim, as grim as it gets, is how I would describe this episode of the series. Has it ever been anything else? I am of two minds regarding this series, while this was an excellent episode that gave the viewer a sense of satisfaction because of all the answers to questions it revealed, I ma getting fed up with all of the teasing without any resolving of mysteries. Its starting to feel like they are just milking it for the sake of making it last longer, and just like the rest of the series, any answers forthcoming gave birth to even more questions.

The string of events this time around were a revelation about a lot of the mysteries the series established as the main thrust of its narrative. Of course we don’t get all the answers, that would go against the sadistic and manipulative nature of the show’s creators.

Like dating a pre-teen girl, season one was primarily a tease, that is just beginning to get down to business in this next to the last episode of the show’s first season. We learned a lot about Arnold, but not enough to put the storyline entirely to bed. The remaining mysteries such as the maze remained elusive, and the show continued to ask the really deep questions about what is it that makes us who and what we are.

The episode left us with a bit of a cliffhanger as to what the fates of its main characters will be, with the exception of one. Skillfully building up to a dramatic point that fell just short of letting us know what happens next, while whetting our appetites for more, and there were surprises a’plenty in terms of the fates of other characters that will leave us with plenty to think about while we wait for season two. Bastards.

Here’s a recap, with some comments (*warning, spoilers follow*)

The episode begins with Maeve (Thandie Newton) in yet another interview session behind the scenes before being returned  to the park. This time around she’s being questioned by Lowe (Jeffrey Wright). She sneaks glances at him when he isn’t watching, making it apparent she just going through the motions and not answering all of his questions truthfully.

He’s asking about what made her suddenly attack and ‘kill’ the surrogate Clementine in the last episode, he finally notices her settings have been altered and he begins to freak and make a call to security when she gives him a command that freezes him in his tracks. The tables have been turned, and Maeve instructs him to pass her for a return to active duty and forget what he has seen

Lowe seems disoriented and even shaken by this experience. Maeve has dropped all attempts at pretense and is fully in charge

Next we rejoin Logan (Ben Barnes), William (Jimmi Simpson), and Delores (Evan Rachel Wood) Logan is still being a douche and doing his best to scare Delores and demonstrate he’s the alpha male in charge. William pleads fro him to release Delores and in an interesting moment Delores asks why would she want to get out of there? If its so great why are they all flocking to get in the park? Good question.

Logan finally crosses the line and after manhandling her, uses a huge knife to cut her abdomen open and show William the robot parts exposed inside. William freaks, but remains steely calm . Surprisingly its Delores who takes charge, and grabbing a nearby gun, she shoots a couple of Logan’s men and escapes.

Meanwhile, we join  Hector Escaton (Rodrigo Santoro) who is out in the wilderness with his gang when he encounters Maeve who wants to talk, they return to his camp just as his men are arguing about the stolen safe and all shoot each other. Armistice (Ingrid Bolsø Berdal) is there too but before she can do anything Maeve kills her. She wants to recruit hector as part of her plan to get out of the park, She convinces him about the ruth of their existence and he agrees to help her.

Back with Logan he awakens after rough night to find all of his men have been killed by William who has turned over anew leaf  because of his love for Delores. He’s in charge now and tells Logan he’s going to find Delores and Logan will help or die.

In another part of the park we find Teddy Flood (James Marsden) and the MIB right where we left them last week and Angela (Talulah Riley), the woman that set them up to be captured is still there too. They have along conversation about the legendary Wyatt (Sorin Brouwers) and what  will happen next and somehow she causes Teddy to remember the slaughter  done by Wyatt and then reveals the truth that Teddy was the one that did it all along. Its possible this means that Teddy is Wyatt or maybe not, but we know something odd is definitely going on here with that storyline.

Back behind the scenes security gets an alert about activity in a part of the park where normally there is none and Ashley Stubbs (Luke Hemsworth) goes up top to check it out himself his communicator tops working and he finds himself being approached by wild indian hosts who do not respond to commands and attack him. Who set him up and why?

This episode left me with a lot of questions, for example just what are the safety commands in the hosts, and what are their limits? It seems as if they can do guests damage, but not kill them.

Next we rejoin Lowe and Ford. Lowe has set up the original Clementine with a gun as insurance. She has not had her safeguards reinstalled and he thinks he has the upper hand over the puppet master Ford, of course we know he does’t. He demands to have all of his memories restored and Ford complies, but warns him against it.

We and he finds out he was responsible for killing the missing Elsie (Shannon Woodward), and that he was built by Ford as a tribute to the mysterious Arnold  that Ford used to replace the real one that died. he orders Clementine to shoot Ford, but of course Ford is god here and it doesn’t work. Ford has Lowe kill himself instead as he leaves. Ford mentions he has a new story to tell and I am dying to find out what that is. Not likely we find out next week.

Meanwhile Delores has entered the mysterious little town by the river she visited once before, and she enters the little church and sits in a confessional which turns out to be an elevator that takes her down to a  maintenance level beneath the town, She begins to experience memories that are vague of Arnold, Ford and others, She finally comes face to face with Arnold who is indeed Lowe and he tells her he can’t help her because he’s dead and adds because she killed him. What is the connection between Delores and Arnold beyond that, and what happened?

After Teddy and Angela leave the MIB awakes tied by a noose to tree, and a nearby horse and he barely escapes with this life, he is approached by Charlotte (Tessa Thompson), who wants him to cast a vote to get rid of Ford. So along with knowing he’s a wealthy philanthropist we now know he’s on the board of the corporation that owns the park. She also mentions he was responsible for keeping Ford in business when the park was about to fold years ago. he tells he doesn’t wan to be disturbed again which speaks volumes about their relationship. That scene explains a lot.

Back with Delores, as she goes to leave the church the Man In Black enters and Delores is obviously afraid of what he might do to her, is the elevator down to the lower level the entrance tot the maze? and what the hell is the maze anyway? Will Elsie reappear? is she a real person? If i sound annoyed its because i am. the creators of this series are sadistic and manipulative and i have had enough of this crap. I want some answers! See you next week for the season one finale.