Invasion!: The DCU Crossover Event Was About What You’d Expect 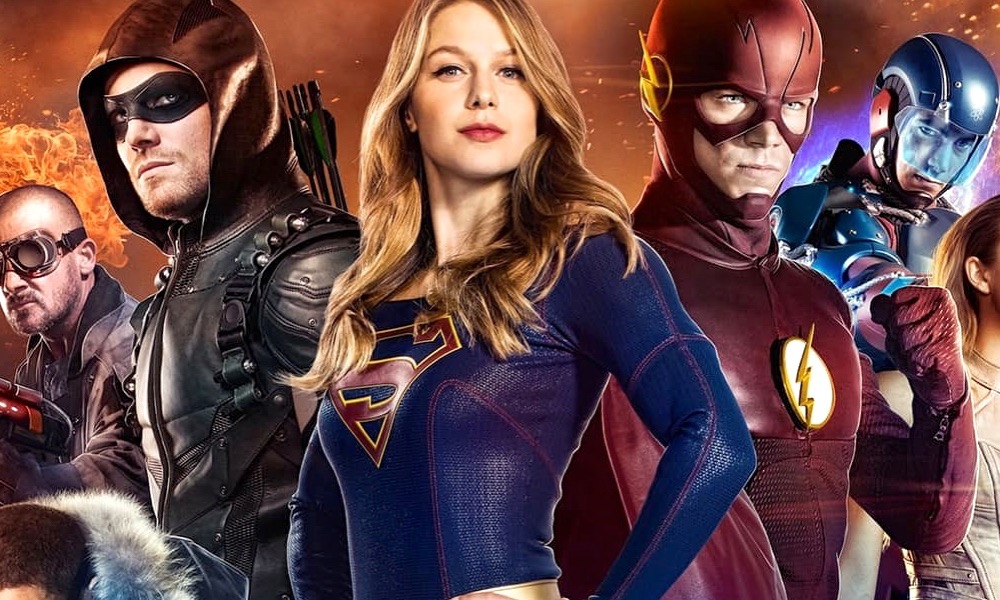 As an ambitious ensemble production Invasion!, so far, is about what you would expect, It has some strong points and moments and some weak ones as well.

The four-night event officially began on Supergirl’s most recent episode that aired on Monday 11/28/2016 and so I am addressing the Flash episode of the event as part two. The actual events depicted on Supergirl consisted of very little in the way of contributing to the story, it simply portrayed Barry and Cisco arriving in Kara’s loft just as she is getting home and then greeting them. There were several unexplained events in the episode that turned out to be Barry and Cisco’s earlier attempts at getting to where they wanted to be.

The big event that has been so over hyped by the CW is solar just about what you would expect, this episode mostly took on the feel and approach used by the series, The Flash with some touches of the Cutey-pie fluff of Supergirl, the more serious melodrama of Arrow without anything noticeable being contributed to the feel of the episode by The Legends of Tomorrow, except a scene involving Rory that was an attempt at the sort of humor the Legends typically use involving him.

The episode was mostly enjoyable I suppose, it whisked by so quickly it never had a chance to get boring, but spent maybe a little too much time on the whole Barry messed up thing involving the Flashpoint.

This episode is really where the story begins when what the Starlabs gang thinks is a meteor on a trajectory to land in downtown Central City turns out to be a spaceship belonging to an alien race known as the Dominators. Barry (Grant Gustin) arrives at the landing site just after the landing, and when he goes to touch the ship it emits some sort of energy that pushes him back on his backside.

This is immediately followed by what can only be described as a stampede of the aliens leaving the ship and running away from it. This was a pretty cool scene. The aliens, done in acceptably good quality CGI are pretty intimidating and creepy looking. They don’t pay any attention to Barry as they go to wherever it is they seem to be in rush to get to.

Barry freaks and sounds the alarm about aliens first to his friends at Star Labs, and then to Oliver (Stephen Amell) and friends in Star City including Thea (Willa Holland). they, in turn, figure out how to get in touch with the Legends Of Tomorrow who all arrive shortly after, minus Citizen Steel and Vixen, who White Canary (Caity Lotz) shrugs off as newbies left to watch the Waverider.

Once they are all together Barry and Cisco (Carlos Valdes ), go and get Kara (Melissa Benoist) who arrives as Supergirl, a new commodity to most of the others present. A brief sample of flying while burning her logo into the cement floor with heat vision of the hanger they are using as headquarters is enough to answer any questions about her abilities.

It should be noted the location and appearance of the ‘old hall’ as its referred to by Barry they use as headquarters looks exactly like the classic Hall Of Justice from the old Justice League comics and Superfriends cartoons. A tip of the hat by the show’s creators.

Once they settle down and are all acquainted, the pecking order is the next decision they decide to pursue, and Oliver is nominated by Cisco who is still having issues with Barry since he found out about the Flashpoint, But Oliver suggests it should be Barry since he got them all together. Oliver is obviously the most qualified for the job, with seniority over the rest as the most experienced (after all it is called the Arrowverse), and when Barry stammers and hesitates he supplies him with what to say.

They use Supergirl for target practice prepare to fight the alien invaders and their attacks are ineffective and futile as she remains unaffected by them, but Oliver insists they continue to train by trying to develop an effective way to attack her. This part of the show was fun to watch and made a good showcase for how much more powerful Supergirl is compared to the others.

There’s a subplot involving Wally West/Kid Flash (Keiynan Lonsdale) who is eager to join the others but is being held back by his sister Iris (Candice Patton) who goes all control freak on him and says she wants to protect him. He, of course, is angry, upset, and frustrated by this. He turns to HR (Tom Cavanagh) and asks him to train him in secret so he can be ready if needed, but HR refuses. I am having a hard time understanding why this character HR is even on the show. What purpose does he serve?

So while the humans run around like a bunch of cockroaches after the lights get turned on, the Dominators are setting up shop and carrying out their agenda like pros, They are obviously way more technologically advanced and pretty much do whatever they want unmolested.

When they kidnap the president the gang goes to get him back minus Barry and Oliver. Barry messing with the timeline has become common knowledge in the group and they all spend time making him feel like crap for making a mistake, and Barry is still beating himself up over it too. Oliver gives him a pep talk and tells him to snap out of it, what’s done is done and you have to move on, etc..

The gang attacks the alien hideout and are soon treated to the aliens technological superiority. There’s an attempt at humor with an exchange between Rory and Supergirl when he says he refuses to call her super girl or Kara but will call her ‘skirt’ instead. but as soon as they are attacked the first thing he does is call out for Supergirl to do something. This was a forced attempt at humor that only partially succeeds.

The aliens use some sort of mind control device on the gang which turns them into slaves to do their bidding, and their bidding is to get Barry and Oliver, who they all attack with bad intentions.

Barry and Oliver are no match for all of the others combined against them, but Kid Flash intervenes and saves them from certain death and destruction at the hands of their friends, but he himself falls victim to an attack from Supergirl that injures him when he lets his guard down.

Barry uses his wits and figures out the transmitter that is affecting his friends is back in the alien stronghold, and he tricks Supergirl into destroying it which gets everyone back to normal, Just as it looks as if things are going to be okay the aliens start teleporting everyone away leaving Barry alone, and that’s how the episode ends.

Apparently, they are saving the best parts for Arrow tomorrow and possibly Legends on Thursday.