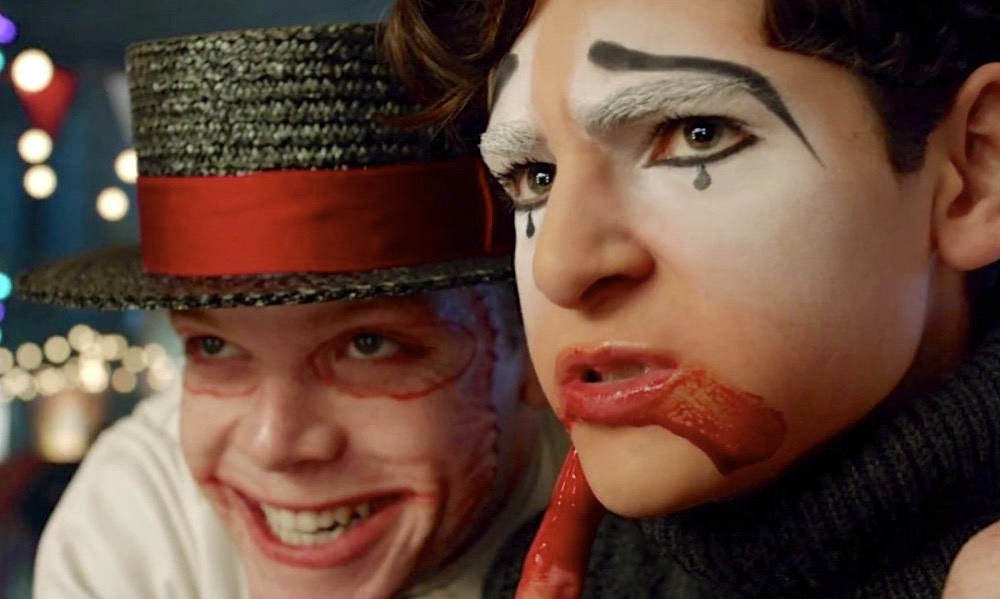 Gotham goes more insane than usual after Jerome cuts the power, and Penguin meets his fate.

This weeks episode was a riot, or least it starts with one. Jerome blowing up the power station set off a night of insanity in the dark city, complete with the Joker gang going insane with a night of anarchy in its many usual modes of being expressed.

The episode was not as scattered as it has been on occasion as of late, but spent its time mostly focused on what Jerome was up to, and the story arc centered around Penguin and Nygma. That was okay, because sometimes when this series spreads itself around too much it can wind up spreading itself too thin. The same thing that sometimes gives the show its  appeal, can also sometimes be its weakness.

It was an excellent episode filled with moments that kept me engaged and even on the edge of my seat in anticipation of how things would wind up for the characters involved in this weeks narrative.

The episode starts out like gangbusters with a full on riot taking place at the headquarters of the GCPD. Gordon (Ben McKenzie), Bullock (Donal Logue) and the rest of the cops present had their hands full and it seemed as if the crazed followers of Jerome might get the upper hand before they were finally brought under control and locked up.

Jim is seen unsuccessfully trying to beat the whereabouts of Jerome out of one  the rioters, when he suddenly remembers that Lee (Morena Baccarin) was the last one to talk to the manic psycho. He seeks her out and she volunteers the information that he mentioned killing Bruce. So Jim has her call Wayne manor as he leaves for there to try his luck and maybe capture the lunatic while saving Bruce (David Mazouz) and Alfred (Sean Pertwee).

We catch a glimpse of the woman from the Court of Owls and a male companion watching the unfolding chaotic events in the streets below dispassionately to see if events might require their intervention.

Meanwhile, sure enough, Jerome and some of his followers arrive at Wayne Manor and get the drop on Alfred. Jerome plans to kill Bruce right there on the spot, but Bruce convinces him he should do it properly with an audience to make it the special occasion it deserves to be treated as.

Jerome leaves with Bruce as his hostage leaving instructions for his companions to kill Alfred, but Jim arrives in time to save him, making short work of his intended assassins.

We catch up with Penguin (Robin Lord Taylor) who has fallen into the trap prepared for his arrival, and is greeted by Ed (Cory Michael Smith) who kills the two thugs accompanying Oswald, who still doesn’t understand  the nature of the situation and gushes at the sight of Nygma who spells the situation out for him. Ed sets up an elaborate death for Oswald involving a block of ice, a chain, and a barrel of acid suspended over penguin tied to the car of Isabella and leaves.

At the last moment a mentally challenged security guard arrives just in time to release Penguin from his bonds and saves him from a grisly death. After he leaves, Penguin falls into the hands of Butch and Tabitha who tease and torment him some before Barbara shows up and then finally Ed. At this point Penguin finally seems to catch on that they were all in on it together.

Meanwhile, Jerome (Cameron Monaghan) has taken Bruce to the location of a carnival complete with rides and  lots of lights without any explanation of why this part of town is unaffected by the blackout. Anyway the place is bustling with activity  as members of the Jokers gang busy themselves tormenting and torturing anyone unlucky enough to be captured by them apparently for that purpose. They are using people as human targets in the carnival games and even have a human version of whack-a-mole.

Jerome has given himself a costume change as a circus style master of ceremonies for what suddenly transforms into a circus macabre with his followers as the audience. Jerome is really quite good as the Joker, and if he isn’t the real Joker, its hard to imagine who they will get to replace him as the actual Joker, because he will be a hard act to follow in the role. As he’s trying to make an announcement part of the crowd is making too much noise celebrating and Jerome shoots him dead  for his transgression.

What follows goes a long way towards serving as a means to depict just how much Bruce has developed and evolved, as well as being an interesting scene that serves to define the relationship between Bruce and Jerome. Jerome’s face/mask begins to come loose and he has to restaple it to his forehead and when Bruce mocks him asking if it hurts, he uses the stapler to put a couple of staples into Bruce’s arm. Bruce is defiant, he doesn’t complain or even react, at first, but after the third one he shows signs of suffering and asks Jerome to stop.

The entire scene serves to show how much Bruce has changed, he seems to be fearless in the fact of certain death and more suffering, he’s come a long way since the series began, he is no longer that skinny little kid, he’ growing fast and the signs of physical maturity are pretty obvious. Its getting easier to imagine him becoming the man we know he is destined to become. Jerome sets up a circus type cannon right in front of where Bruce is tied and loads it with a huge cartoonish cannon ball and proceeds to add a bucket of knives, nails, and other metal shrapnel to it. Its aimed right at Bruce’s face and its only about foot or two away from him.

Jim, Alfred, and Bullock arrive and Jim shoots his gun in the air resulting in chaos as the crowd scatters. Jerome lights the fuse to the cannon. Meanwhile, Bruce seeing an opportunity to possibly escape  pulls one of the staples from his arm and picks the handcuffs he’s attached to the pole with, he drops it to add to the suspense, so he has to start over again, but when the cannon goes off he has indeed escaped.

Somehow, Jerome eludes capture and starts looking for Bruce who has escaped into a nearby house of mirrors. Yes, they used that old chestnut, but whatever, it worked. Suddenly the equation is turned on its head and Bruce has become the hunter and Jerome the prey as they play a deadly  game of cat and mouse with each other.

Bruce gets the drop on him and actually beats him in a toe-to-toe fist fight. He’s come a long way thanks to Alfred’s training. The show does a great job depicting Jerome’s damaged face, its grotesquely disfigured and  just plain disturbing to look at. Bruce comes close to killing him, but stops himself before carrying out the deed. He leaves the building to find Alred out side and is relieved to see him not being certain if he was still alive. Jerome tries to sneak up on them but  Jim intercepts his  attempt to finish what he started with few well placed punches that actually finishes the job of removing Jerome’s face again.

The episode ends with Ed and Penguin on the waterfront with Penguin begging for his life, and it almost seems for a moment as if Ed has changed his mind and will let him go, but he doesn’t,  he shoots penguin in the torso and then shoves him into the water. The last thing we see is Penguin receding into the depths enveloped by a cloud of his own blood.  He survived the experience once before, but it looks this time might be the end. Who knows? After all it is Gotham.