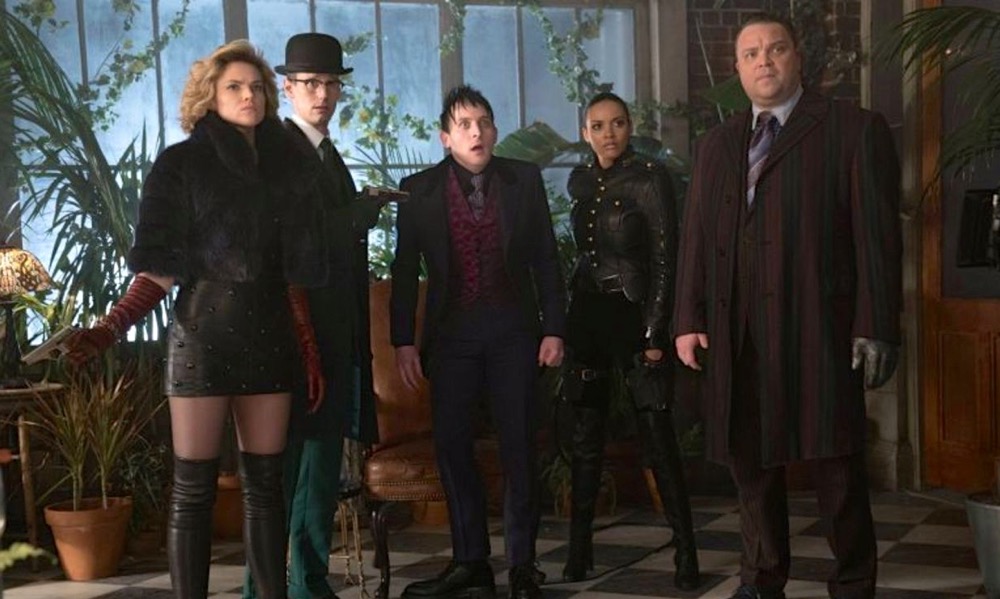 The season finale draws near, and things are heating up in our favorite dark, crime-ridden city. Just about everyone’s involved this time around in an eventful episode that will play a big part in the fate of the city and that of some of our favorite citizens.

Just when you think you have a handle on what’s going to go down, sudden reversals and surprises galore turn the plot on its head in the latest episode, leaving you guessing how it will all end up next week, and until the season ends.

It was an exciting episode that didn’t waste any time getting down to business, there was a lot that needed to be done and there was no time for wasting on thoughtful moments. Like it or not, its action time in a really great episode.

We start out at a meeting of the Court Of Owls, being led by the Shaman (Raymond J Barry). You may recall Kathryn is no longer among the living. It’s revealed he is indeed the leader of the Court who spends a lot of time away from Gotham and he’s not happy about some of the decisions that were made while he was out of town, namely the murder of the Waynes. He turns to Bruce (David Mazouz) and tells him to give the order, but when Bruce hesitates, he claps his hands twice and a group of masked Talon guys appears and promptly cut the throats of everyone seated at the table. Meeting adjourned.

The GCPD, in their traditional manner, show up moments later and discover the grisly scene just in time for one victim to gasp his last words to Bullock (Donal Logue) about the Leader and Bruce killing them all. Alfred (Sean Pertwee) is right there, brandishing a weapon, in the front lines as part of the GCPD’s raids on the Court’s hideouts. he’s desperate for any word on Bruce’s whereabouts and whether he’s okay. You know, I could have sworn I saw a Talon or two who have been killed in previous episodes back in action again this time around.

We see another scene with Bruce and the Shaman and he is still working on Bruce, brainwashing him for more to come. Has Bruce gone over to the dark side? It sure looks that way. The Shaman reveals he is working for someone else who is eager to meet Bruce, I think this has to be Ra’s al Ghul, who is scheduled to appear on the show soon. We may get to see him this year, in fact, it is looking like he will arrive for the season finale.

After their failure to find out more about the location of the virus bomb Jim goes to check up on Lee (Morena Baccarin) who they all suspect has intentionally exposed herself to the virus, and sure enough, she has. Jim finds her at home she’s all talking her darkest desires and whatnot and knocks him out. She arrives at GCPD headquarters just when Bullock is getting really worried about Jim, she tells them she has buried him alive, but provided him with a way out – the virus.

One of the raids nets Hugo Strange (B.D, Wong) who Bullock promptly locks up on his way to go find Jim, but the Talons manage to escape with the bomb.

Lee is effective in this new role as a crazy woman. She seems able to to make her eyes red and clear up whenever she wants, turning the crazy on and off at will. There’s an amusing scene when they lock her up in the cell next to Hugo Strange. he smiles at her, and she makes her eyes change and he looks suitably nervous at the sight and begins backing away.

So after they lock her up, Bullock and everyone figures out where she most likely buried him and a massive search is put into action to find Jim, but time runs out and he takes the virus to escape. Okay, you’re buried alive and you can’t muster the strength and determination to get yourself out of a wooden box unless you take this stuff that makes you act like you overdosed on Angel Dust? I found that part of the story a little weak.

Meanwhile, we have Oswald (Robin Lord Taylor) at Ivy’s (Maggie Geha) along with Selena (Camren Bicondova) who’s hanging out. Oswald is going nuts with frustration he’s frantically pacing, throwing and breaking anything unlucky enough to be in his path. he’s been abandoned by Firefly and Mr. Freeze because of lack of action and he discovers that Selena knows Bridget/Firefly and he drafts her to find her for him. As they are speaking, There’s the sounds of the door being treated roughly and it turns out to be Nygma (Cory Michael Smith) and Butch Gilzean (Drew Powell) who are both eager for Oswald’s blood, but Oswald is prepared, he has an escape route in place and escapes.

Selena, who took the nearest exit at the first sign of trouble gets ambushed by Tabitha (Jessica Lucas) on the roof, knocked out and taken prisoner. Later she is grilled by them and she agrees to tell Oswald she knows where Bridget is to set him up. It looks like Nygma is in charge and there is widening schism happening between Tabitha, Butch, and Barbara (Erin Richards). Anyone’s guess how things will all end up with this group.

Harvey assigns Alfred to get as much info out of Hugo Strange any way he can. He gives him carte blanc to do it as he sees fit. We next see Strange being the threatened with certain death as Alfred hangs him by his necktie precariously from the roof unless he talks. Hugo spills the beans, he gives Alfred the time the bomb will go off and tells him where Bruce is. It was nice seeing Hugo again, I always really enjoyed B.D. Wong’s portrayal of the character as a drama queen.

Nygma and friends catch up with Oswald at Ivy’s greenhouse and are deciding what to do with him when they hear suspicious sounds. they suspect it’s a trap Oswald has set up, but it’s a big surprise no one saw coming. Fish Mooney (Jada Pinkett Smith) arrives with two heavily armed and sizable goons flanking her stylish appearance, and she’s cool as ice as he absconds with Oswald. he’s curious why she’s there and she tells him he will find out. Wow, Jada looks great, I had forgotten what a beautiful woman she is.

Alfred arrives to find Bruce and the Shaman at Wayne Industries, The Shaman has just given Bruce a trigger to set off the bomb remotely,  Alfred shoots and kills the Shaman, but before he dies he triggers the bomb, and he tells Bruce to find the Demon’s head (another reference to Ra’s al Ghul  I’ll wager). Bruce attacks Alfred for killing the Shaman but is restrained by a couple of cops, he regains his composure and tells Alfred he’s too late.

Okay so it’s figured out the bomb is at the local train station and set up near station’s clock so everyone converges on that location. Jim all fired up on the virus literally tosses aside a cop who greets him when he arrives. Lee shows up after easily escaping her jail cell and stuns Jim with a blow that sends him crashing to the floor preventing him from doing anything to prevent the bomb from going off in time. The bomb goes off with Jim and Lee at ground zero there’s instant panic from the crowds of commuters below in the station and an enormous red cloud of the virus erupts from the building.