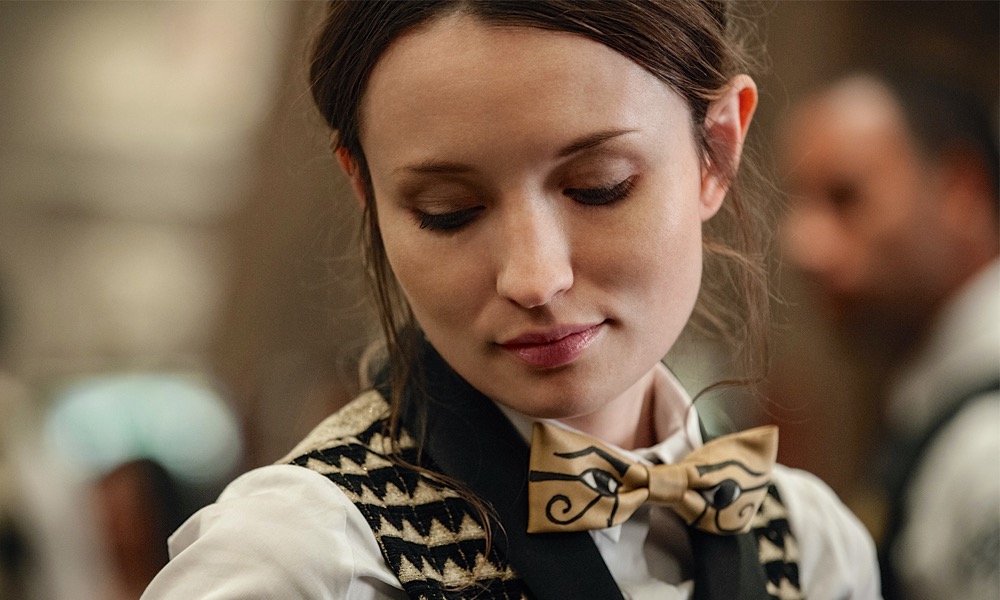 In Git Gone, the series takes a long hard look at Laura, how her romance with Shadow began, and more, in a well-crafted back story.

This week’s episode focuses mostly on Laura, her story before and after death, and also provides some clues about who may be pulling the strings in regard to her fate. Okay, if you have been paying attention, you know Laura was killed in a car accident while giving Shadow’s best friend a blow job just prior to his being released from prison, If you have been really paying attention, you may have noticed the presence of a pair of ravens when her romance with Robbie began and is abruptly terminated, and also during the period be when she first meets Shadow.

The pair of ravens has been spying on most of the events revolving around Shadow and Laura and I don’t think its too much of a stretch to think they are acting as agents of Mr. Wednesday and represent his interest in the pair.

This may be a clue that Odin is indeed involved and manipulating events, and has in fact been manipulating things since way back when in some sort of long game of setting the stage for future events. This speculation on my part may be way off, but its an intuition I am willing to gamble on. Speaking of gambling, that’s how we are first introduced to Laura as a dealer at a Blackjack table in Vegas. There are signs she is a restless spirit bored with her existence, Which may be why she agrees to take home the small time grifter, thief, and hustler Shadow home with her when she meets him trying to cheat the table she is responsible for.

She’s also annoyed with her employers for taking away the one thing she likes about her job, shuffling; when they introduce an electronic machine the does it for her. In a way that becomes the last straw in an existence, she can already barely tolerate.

Laura, played by Emily Browning looks a lot different than her Baby Doll days in Sucker Punch (2011), but still has a lot of sex appeal, and she is convincing in the role as the possibly suicidal, thrill seeking Laura Moon. There’s evidence she might be a little schizophrenic too as she goes about making decisions that seem to reflect she is of two minds in most of them she makes.

We are introduced to Laura as a blackjack dealer in an ancient Egyptian themed casino. She is shown going through the routines of her days and at one point she is shown at home getting in a hot tub and spraying a generous amount of bug spray around her immediate vicinity and then closing the lid trapping herself inside with the toxic fumes, only to emerge coughing and choking moments later. I got the sense she did it just to see what would happen. This is the first indication that something here is not right.

Soon after, she meets Shadow (Ricky Whittle) who tries to pull a fast one with the chips at her table but she catches him at it and warns him to go, He waits for her to get out of work in the parking lot, and their whirlwind relationship begins. She is genuinely happy at first, but the show depicts her diminishing enthusiasm in a series of shots of her on the way to another shift at her job in a depiction reminiscent of the breakfast table sequence in Citizen Kane.

When Shadow first meets her he suggests she become his inside person in a plan to rob the casino, and suddenly in the midst of this malaise she approaches the topic again, saying she has the perfect plan based on her intimate familiarity with her place of employment, but of course, something goes wrong and now we know what led up to Shadow being in jail. The perfect plan had a flaw.

There is a long depiction of the slow burn of her existence that leads up to her affair with Robbie (Dane Cook) Which when she finally gives in to temptation also shows her two-minded approach to making decisions. The only problem is, Robbie gets complicated when he thinks he is in love. This is under discussion just before the fatal car wreck and she tells him she is still waiting for Shadow who is soon to be released.

Right after the wreck, while she is looking down on her broken body, Anubis (Chris Obi appears, (apparently he is connected because the casino had the Egyptian theme?) he leads he to do the weighing in of the heart ritual, but she refuses, slapping his hand away when he attempts to harvest the organ in question and she defiantly refuses to take part in the ritual she’s convinced she already knows the outcome of. She wants to go back she says but he explains she has already had her organs removed and is buried in the ground.

He is preparing to send her through to what he describes as crossing over, but when he turns his back for a moment, she is suddenly whisked away by some invisible force that flings her point beyond sight. We see her next emerging from her grave, digging her way out of the moist soil on a rainy night The show’s staff went to great lengths to make her look unattractive, and it worked. She literally looks like something the cat dragged in including makeup to enhance a corpse-like pallor to her skin. Whatever, or whoever yanked her away is interfering for a reason, he, she, or it has plans for Laura and so here she is.

She sees a golden glow off in the distance and heads for it like it’s the natural thing to do, and she eventually comes on the scene of Shadow’s lynching by Technical Boy’s drone-clones. She leaps into action and begins hitting the drones with deadly results, there’s blood everywhere as strike them with a force that destroys their bodies and reduces them to grisly pulp and parts. A single punch by her reduces them to a bloody pulp. The degree of gore in his scene is beyond over -the-top, it is an unforgettable uber-graphic depiction of an orgy of blood splattering violence, and the many ways a human body can be destroyed. Laura jumps one of the corpses that litter the scene and grabbing the rope that is holding Shadow by the neck she breaks it with her bare hands, saving his life.

She is busted by Audrey (Betty Gilpin), Robbie’s widow, who naturally freaks out at the sight of her, but eventually calms down enough to make more than a few unkind remarks which seemed only fair under the circumstances and Laura acknowledges that. Audrey attempts to help attach her arm, and they leave for elsewhere in her car when they encounter Mr. Ibis and Anubis who recognizes her. Audrey’s freak out and snarkiness are quite amusing.

They take her in hand to a funeral parlor where Anubis effects repairs on her corpse while she patiently waits for him to be done, He tells her after she is finished he will come for her and finish what he must do. The applications of his skills are lovingly applied, her torn parts are sewn up and makeup applied to restore a more life-like pallor to her skin.

She is shown almost good as new awaiting Shadow in his motel room when he arrives, surrounded by the golden glow she sees him with. Is she seeing his true nature or an indication of it? I still wonder what makes him so special that Odin has himself so closely associated and in close proximity to Shadow. Although he doesn’t appear in this episode I am convinced its Odin who is pulling the strings in this puppet show featuring Shadow and now Laura too. I am convinced it was also Odin that made Laura into whatever it is she has become and is manipulating events to follow some long range conclusion he desires for the upcoming war with the new Gods. The conclusion of this episode brings us up to date with the ending of last week’s episode. Another engaging episode from this bizarre series that, so far, hasn’t failed to be entertaining. What happens next is anyone’s guess.