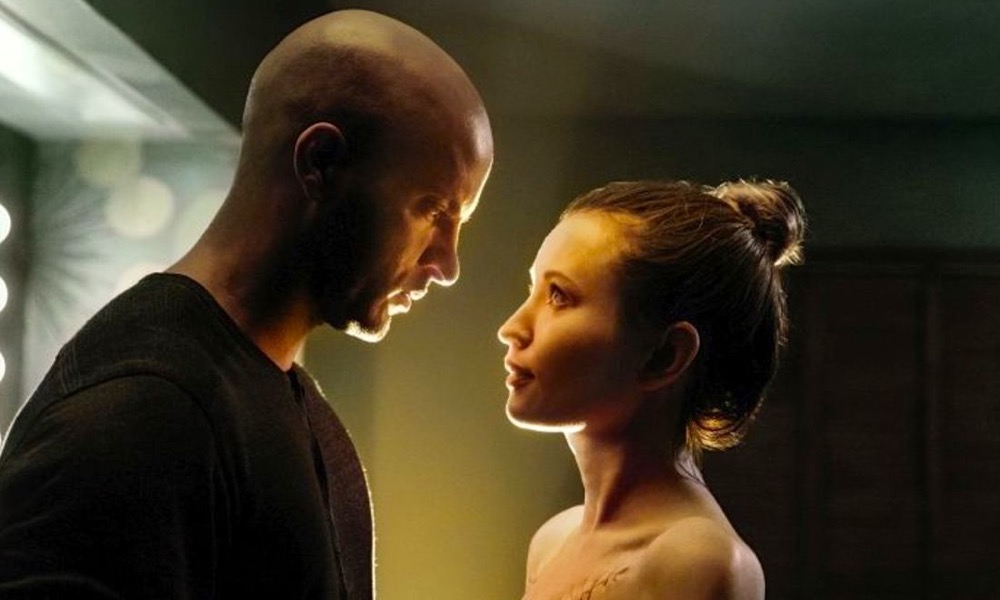 We are treated to the most amusing episode of the series yet, but don’t worry, there was still plenty of creep-spookiness to go around.

There were plenty of smile-inducing moments in last night’s episode of the series, and of course, there were some skin-crawling moments too. We get our first real look at what the new gods are capable of as we meet Mr. World for the first time.

The episode’s focus was a little more narrowed this time around, there were no side trips to see Biliquis in action with her sex act or any glimpse of Czernobog. The focus was mostly on what occurred to Mr. Wednesday, Shadow and incidentally Mad Sweeney and Laura Moon, but it was plenty to make for an amusing and engaging episode that kept me fully entertained. It was a great episode full of suspense and amazing events that had me wondering once again who is Shadow Moon really?

We find ourselves once again reliving the moment when Shadow (Ricky Whittle) returns o his motel room to find Laura (Emily Browning) there waiting for him. After throwing a pillow at her to see if she’s real, he has a lot of questions, and they begin discussing the obvious ones like WTF? regarding her affair with Robbie (Dane Cook). Laura gets in the tub trying her best to erase the smell of death that surrounds her without much success. This might appear like any other scene between a man and a woman, except there are constant reminders that she is actually dead, which makes it all the more creepy when they kiss.

Her appearance is the first thing that’s off, way off. She emerges naked from her bath and she looks more like a doll, than human her parts have the look of being artificial and plastic, and then there’s the crude stitching that’s holding her together, making her look more like something that has recently emerged from Frankenstein’s lab than the alluring woman she is trying to be.

They kiss, and something fantastic occurs, She glows for a moment and we see that she suddenly has a heart and it beats, just once, but that’s enough to get her excited. Before the kiss, she asks Shadow to get her a cigarette and we see him through her eyes once again surrounded by the warm yellow-orange glow as always.

That still has me thinking maybe she is seeing him in his true form, or at least closer to it than we see him. That glow suggests, among other things, he could be Ra the ancient Egyptian god of the sun and creator of all life. That would make sense as to why Mr. Wednesday has him hanging around, Ra would be his ace in the hole in case things goes south in the coming war. His dreams about the bone orchard suggest other things, but I am still having fun speculating what his real identity might be.

Odin picks that moment to show up and interrupt them, he makes a remark about the smell coming from Shadow’s room asking if that is cat piss and oven cleaner. Which made the already nasty necrophiliac kiss even nastier. Ewwwwwwww!

Odin invites Shadow out for few drinks since they both cannot sleep, and just as Shadow is making excuses the cops show up acting on an anonymous tip to bust them for the bank con they pulled in Chicago. The get hauled in and interrogated at length with zero results. Shadow is shown stubbornly asking for a lawyer over and over again, and Odin is just plain shooting massive amounts of bullshit that are more nonsensical than helpful.

We catch a brief glimpse of Technical Boy (Bruce Langley) leaving his abode when he is ambushed by one of his own virtual reality landmines that previously captured Shadow. he finds himself confronted by Media (a barely recognizable Gillian Anderson) in a David Bowie -like getup telling him he has to apologize to Shadow for having him beaten and lynched. He refuses, but that’s not the end of it.

Meanwhile, Mad Sweeney (Pablo Schreiber) shows up at the motel room where Laura has once again just emerged from the tub trying to get rid of that smell. He tries to strong arm her into giving him the coin he seeks, he even goes so far to look down her throat, where it is clearly visible, inside her otherwise empty interior. At this point, she takes exception to his behavior and simply plucks him with her finger sending him crashing across the room. She still has the super strength and she makes short work of him.

He remembers she’s dead, he refers to her as Dead Wife the entire time, and he suddenly has the impulse to get her back in the tub thinking the warm water will accelerate her decomposition. Right then the cops return and it looks like he has just drowned her to death, She doesn’t move to make it more convincing, and they haul him off for murder. She smiles and just lies under the water while he keeps calling her an asshole for playing dead. Pretty amusing in a morbid sort of way.

Back at the police station, they put Odin and Shadow in the same room to see if that leads to them wising up. After all whoever tipped the cops off was pretty thorough, they sent faxes including satellite photos of the pair outside the bank just before the con took place. Suddenly they  hear the sounds of conflict and even gunfire outside  the room, followed by silence, until the door to the room opens, and Media appears, this time dressed as Marylin Monroe in the famous dress caught in a convenient gentle updraft, she literally floats into the room and Shadow asks how is he doing that. He has finally noticed these people are not exactly from around here.

Next, we are treated to our first look at Mr. World (Crispen Glover) who is apparently the leader of and most powerful of the new gods. We have what is the equivalent of the first summit between the opposing factions and Odin seems surprisingly intimidated, Mr. World is most congenial and charming but there is no mistaking the deadly menace he represents. After a few words, he brings in Technical Boy and compels him to apologize.

Tech Boy can’t resist being a sarcastic little shit, however, and when Mr. World tells him Odin deserves respect, Tech Boy scoffs at the notion of respect for anyone, being the ignorant arrogant little shit hat he is. Media blows him a kiss that knocks out his front teeth and bloodies his face. They leave the pair uncuffed and free to go. Shadow and Odin leave the room to find the precinct a bloody mess, with twisted bodies in contorted poses everywhere. Everyone is dead.

They just reach the front door, when the car carrying Mad Sweeney arrives forcing them to head for the rear exit. As they do an eye appears in the woodwork in the structure and as they go to escape a gigantic tree begins to appear with rapidly spreading branches that appear to be trying to keep them there and prevent them from leaving. They manage to get away. The cops arriving with Sweeney enter the building, leaving him in the car, and he hears a couple of gunshots, he manages to free himself and still cuffed, makes his escape. He hasn’t completely run out of luck.

A quite enjoyable episode, less cryptic than those that preceded it, and I enjoyed the dark humor involved this time around. It still leaves us with several mysteries I would like explained, but that’s part of the fun of watching this show.