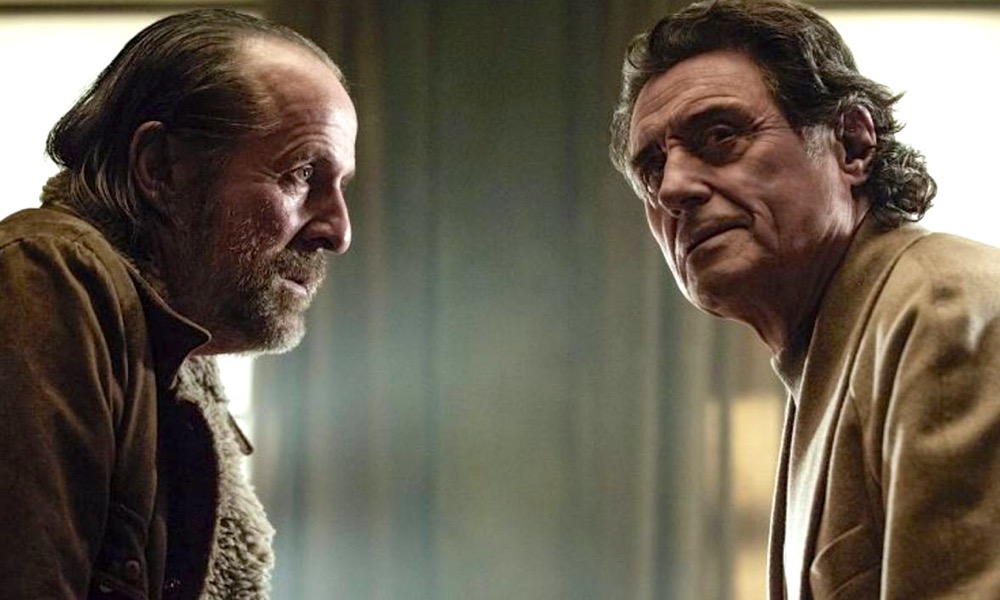 So far the series seems to be a puzzle in story form, the main question being why is everyone so interested in Shadow Moon?

The story continues in this week’s episode, such as it is. The main arc of which is, of course, the road trip of Shadow (Ricky Whittle) and Mr. Wednesday (Ian McShane) to recruit allies in the coming war between the old gods and the new.

Shadow is looking pretty much the worse for wear and tear after his encounter with Technical Boy.

The episode begins with a scene onboard a Dutch slave ship in the late 1600’s in which one of the slaves prays to his African god Anansi who actually appears in the form of Mr. Nancy (Orlando Jones really gets to ham it up in a good way) The spider god appears as a stylishly attired modern black man amongst other things, sometimes as  gigantic spider, and sometimes as man with the spider as a head. He delivers an impassioned speech about the future of the black man in the world. It’s a  speech designed as a call to war.

War against injustice, and war for all the suffering and abuse the future holds. His soliloquy sparks a riot aboard the ship that ends in death for everyone involved and the ship being consumed in flames. It makes for a beautiful shot of the ship going up in flames with the endless sea, the moon, and stars as the only witnesses to the spectacle. Another shot shows a few pieces of wood being washed up on shore and the spider in more realistic scale walking on shore with it.

The only thing about this great scene is it seems to have no connection to what follows, and overall this episode seemed to be a series of events that had little in the way of anything that connected them. We pay another visit to Bilquis (Yetide Badaki) who we find still lurking in her dark red candle-lit abode having sex with a number of people of both genders and finally shoving them in her lady hole. While it was surprising last week, this week it was less entertaining and even seemed redundant, and again it appeared to have nothing to do with the rest of the story the series is telling, just like last week.

Mr.  Wednesday continues to be quirky and exceedingly eccentric. Also, he talks a lot. He mentions the key to his success is charm. Apparently that word doesn’t mean what it used to, because I am beginning to find him mostly annoying

Shadow is shown cleaning up the aftermath of his wife’s demise and is shown going through a few of her belongings that end up reminding him of the details of her death and his best friend’s penis that leads up to a sequence reminiscent of the Galaxy Song by Monty Python.

Shadow is sent on a shopping errand by Wednesday  and while he is in the giant box store he is approached by another modern god this time its media in the form of Lucy Ricardo from the famous TV show, who tries to recruit him right there in the store by giving him the sales pitch by talking to him by way of the tv’s on display for sale It only serves to convince Shadow he may be going insane.

The pair makes their way to Chicago where Wednesday pay a visit to some eastern European acquaintances; a group of old country sisters led by Zorya Vechernyaya (Cloris Leachman) and their brother Czernobog (Peter Stomare), who is an ancient god of darkness.He is covered in blood, and shown killing cows with a device designed for that purpose and seems to be obsessed with blood and death.

He is openly hostile towards Wednesday and not too friendly towards  Shadow either. Stomare is great, he’s really given the opportunity to ham it up here some and does his usual thing of being disturbing, unsavory, menacing and creepy all at once. When Wednesday tries to recruit him he refuses but ends up inviting Shadow to play a game of checkers with a wager that if he loses he will join them, but if he wins he gets to smash Shadow’s head in with an immense hammer he owns for slaughtering cows.

For some reason I cannot fathom Shadow accepts the wager and loses, but we have o wait until next week  to find out what happens when Stomare tries to collect his winnings. Will Shadow be revealed as being some sort of super entity himself? I Find it difficult to believe they will simply kill him off  so soon after introducing him. Like the show itself its a puzzle.

So this episode had some interesting moments, It gets good grades for being mostly entertaining. Its all very well to inroduce a series of interesting characters, but i find my wanting more of a story to go along with them So far we know the road trip is about recruiting soldiers for an army that Wednesday is building for a fight that’s coming between the old gods and the newer gods, but i still don’t get how some of the parts of this show are connected to the rest, and why is everyone so interested in Shadow Moon? What role does he play in the coming war? I suspect he’s more powerful than he knows.