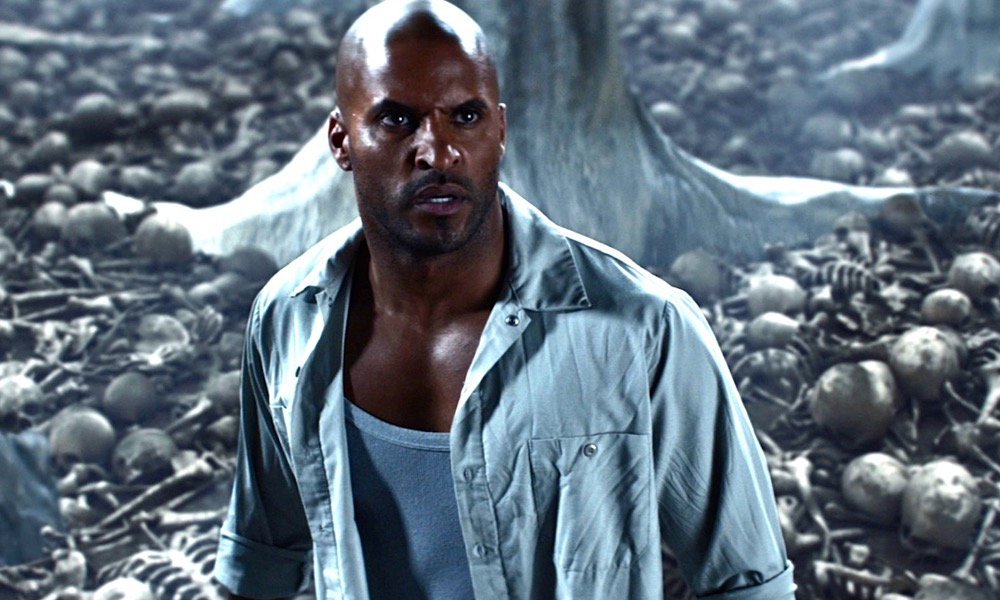 American Gods made an impressive introduction, with a stylish mix of sex, violence, and symbolism.

The pilot episode of American Gods was all about introductions, not just introductions to the characters that populate its narrative, but an introduction to a world, a world composed of a Jungian landscape populated by symbolic characters that represent many of the archetypes commonly at work and play in the human psyche. It represents the anthropological history of humanity regarding the gods we decide to worship and our relationships with them. The show is very stylish in appearance with memorable sets and characters. As the episode develops we soon learn nothing is quite what it appears to be.

Initially we meet Shadow Moon (Ricky Whittle), a large black man doing time in the big house for assault and battery. He’s released from prison soon after we meet him, earlier than expected because of some bad news. The death of his wife. As soon as he gets to the airport it almost immediately becomes apparent this is not going to be the smooth journey it was planned to be. There’s a problem with his ticket, and once he’s actually on the plane there’s a mix-up that leaves him without a seat. This problem works out in his favor resulting in him getting a seat in first class.

Here he meets a man who he witnessed earlier running a con at the service counter for a free upgrade by feigning an inability to understand English and pretending to be a few cards short of a deck. The man implies his name is Wednesday. He is well portrayed by Ian McShane as being enigmatic; creepy, yet charming, friendly and menacing all at the same time. he seems to know more about Shadow’s life than he should considering they just met.

Shadow has vivid dreams the show shares with us giving the show a decidedly surreal touch and feel. The episode continues to follow Shadow and what he experiences, making him the narrative’s central figure at this point. The only exception being an interlude in which we are introduced to middle-aged man who meets an attractive black woman named Bilquis (Yetide Badaki) in a bar arranged through a computer dating app. They have an encounter that verifies this show is not shy about portraying sexual content. She is a character that demonstrates abilities people are not normally capable of. The show handles depicting the special abilities of some of the characters in a matter of fact manner, not sensationalizing them or making them central to the story, but simply as something that occurs.

Shadow continues on his way home to visit his wife’s grave and we find him in an alligator themed bar along the way. The place is a visual treat, and while there Shadow encounters a very large man who introduces himself and claims to be a leprechaun by the name of Mad Sweeney (Pablo Schreiber) , and he also encounters Mr. Wednesday again. Mr. Wednesday offered Shadow a job during their first encounter, and approaches the subject again. Shadow learning the circumstances he was expecting to find at home have changed, this time accepts the job offer. He has a knock-down-drag-out fight with Mad Sweeny who seems to enjoy fighting as a pastime.

Shadow finally gets home and pays an extended visit to his dead wife’s grave, and after an emotional reunion with his best friend’s widow, he encounters some some strange lights floating in the air above some sort of mechanical device. He pokes at it with a stick and it comes to life and suddenly attaches itself to his face. He has what seems to be a virtual encounter with a hostile young man (Bruce Langley), another character, who once again does not seem to be exactly what he appears to be. He has command of the some faceless drones who he commands to kill Shadow, and they come very close to doing that.

While all this is going I am wondering what it is about Shadow Moon that’s got all of these extraordinary people so interested in him. He himself does not appear to have any special abilities, but it occurred to me that maybe he is one of them and for some reason has forgotten who he is and what he is capable of. This is purely speculation on my part, and may in fact be completely wrong and have nothing to do with the plot.

Okay, so in summary this series made a memorable first impression, which is hardly surprising considering the source of the material. Neil Gaiman is considered by some genre fans to be a god himself. The show demonstrated a sometimes graphically portrayed mix of sex, and violence, accompanied by adult dialogue, without seeming to rely on it as the entire basis of its appeal. It showed a lot of style and as a introduction, by definition, it was a little short on substance, but was engaging and certainly entertaining enough to get me interested in seeing more.This is intriguing stuff. It told a story without giving too much away. In fact I, look forward to seeing what happens next week and beyond.