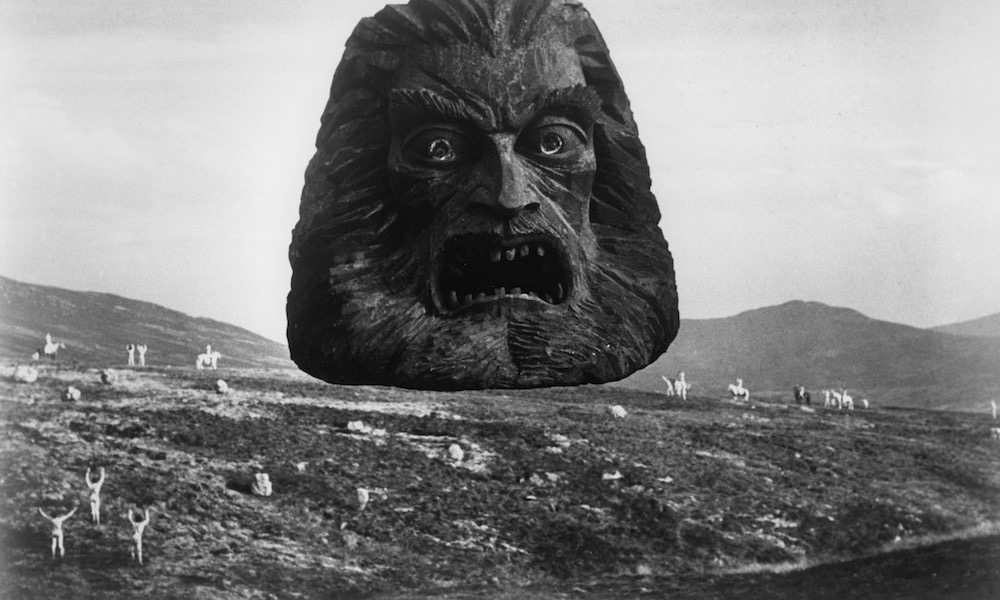 CIRCA 1974: The stone head of Zaroz in a scene from the 20th Century Fox movie “Zardoz” circa 1974.
(Photo by Hulton Archive/Getty Images)

To say John Boorman’s Zardoz is unique is an understatement regarding this oddly whimsical, and surreal depiction of the future of the world and the evolution of our species.

Boorman wrote, directed and produced Zardoz, and one gets the impression there was a lot of drugs and liquor involved in the creation of this film. The film is a product of a period when these elements played a prominent role in the social revolution happening at the time, and the influence is all too apparent for someone who lived through it. The whole film is like an LSD trip, and a testimony to an era when taking the mind-altering drug was an almost every day occurrence.

Zardoz features Sean Connery (in his second post-James Bond role),  Charlotte Rampling, and Sara Kestelman. It is a sexually tinged depiction of a future post-apocalyptic earth in the year 2293 where humanity is divided into two factions The immortal ‘Eternals’ and the mortal ‘Brutals’ who grow food for the hedonistic and somewhat lethargic Eternals who dwell in the Vortex in the ruins of a country estate. The relationship between the two is the connection made by a giant stone flying head the Brutals worship and call Zardoz. It supplies weapons in exchange for food to a faction of the Brutals called Exterminators who rape, kill and pillage other Brutals as a sort of death cult in his name. The Brutals have an unusual choice of apparel they wear, a bright red monokini. The Eternals and Brutals meet when one of the Brutal Exterminators named Zed (Connery) stows away inside the giant head, temporarily “killing” its Eternal operator-creator Arthur Frayn (Niall Buggy) and ends up taken back to the Eternal’s sanctuary. At this point is when Zardoz really takes off to weirdsville.

Arriving in the Vortex, Zed meets two Eternals — Consuella (Charlotte Rampling) and May (Sara Kestelman). Overcoming him with psychic powers, they make him a prisoner and menial worker within their community. Consuella wants Zed destroyed immediately; others, led by May and a subversive Eternal named Friend (John Alderton), insist on keeping him alive for further study.

In time, Zed learns the nature of the Vortex. The Eternals are overseen and protected from death by the Tabernacle, an artificial intelligence. Given their limitless lifespan, the Eternals have grown bored and corrupt. The needlessness of procreation has rendered the men impotent, and meditation has replaced sleep.

Others fall into catatonia, forming the social stratum the Eternals have named the “Apathetics.” The Eternals spend their days stewarding humanity’s vast knowledge (through a voice-recognition-based search engine), baking special bread for themselves from the grain deliveries and participating in collective navel-gazing rituals. To give time and life more meaning the Vortex developed complex social rules whose violators get punished with artificial aging. The most extreme offenders get condemned to permanent old age and the status of “Renegades.” Any Eternals who somehow manage to die, usually through some fatal accident, are almost immediately reborn into another healthy, synthetically reproduced body that is identical to the one they just lost.

Zed is less brutal and far more intelligent than the Eternals think he is. Genetic analysis reveals he is the ultimate result of long-running eugenics experiments devised by Arthur Frayn — the Zardoz god — who controlled the outlands with the Exterminators, thus coercing the Brutals to supply the Vortices with grain.

Zardoz’s goal was to breed a superman who would penetrate the Vortex and save humanity from its hopelessly stagnant status quo. The women’s analysis of Zed’s mental images earlier had revealed that in the ruins of the old world Arthur Frayn first encouraged Zed to learn to read, then led him to the book The Wonderful Wizard of Oz. Zed finally understands the origin of the name Zardoz — Wizard of Oz — bringing him to a real awareness of Zardoz as a skillful manipulator rather than an actual deity. He becomes infuriated with this realization and decides to plumb the deepest depths of this enormous mystery.

As Zed divines the nature of the Vortex and its problems, the Eternals use him to fight their internecine quarrels. Led by Consuella, the Eternals decide to kill Zed and to age Friend. Zed escapes and, aided by May and Friend, absorbs all the Eternals’ knowledge, including that of the Vortex’s origin, to destroy the Tabernacle. Zed helps the Exterminators invade the Vortex and kill most of the Eternals — who welcome death as a release from their eternal and extremely boring existence. Some few Eternals do escape the Vortex’s destruction, heading out to radically new lives as fellow mortal beings among the Brutals. Zed brings the immortals salvation by bringing them death.

The first time I saw this film, it left me wondering WTF? It turns out I was not the only one left confused by the movie’s narrative, film critics of the time seemed somewhat perplexed by it too. It is a self-indulgent film, and a very odd discussion of human nature and a sometimes amusing, slightly chilling appraisal of the goals of evolution regarding human development and the questions surrounding mortality. It’s a very odd answer to the question of what would people do if they finally achieved immortality?

The film indeed is memorable if nothing else, it remains a cult classic, and in the end, an enjoyable and amusing way to spend a couple of hours. The Flying stone head of Zardoz has become a modern science fiction icon along with the meme of Connery as Zed in his Monokini and knee-high boots brandishing his pistol. Zardoz has achieved an immortality of its own. Zardoz lives.