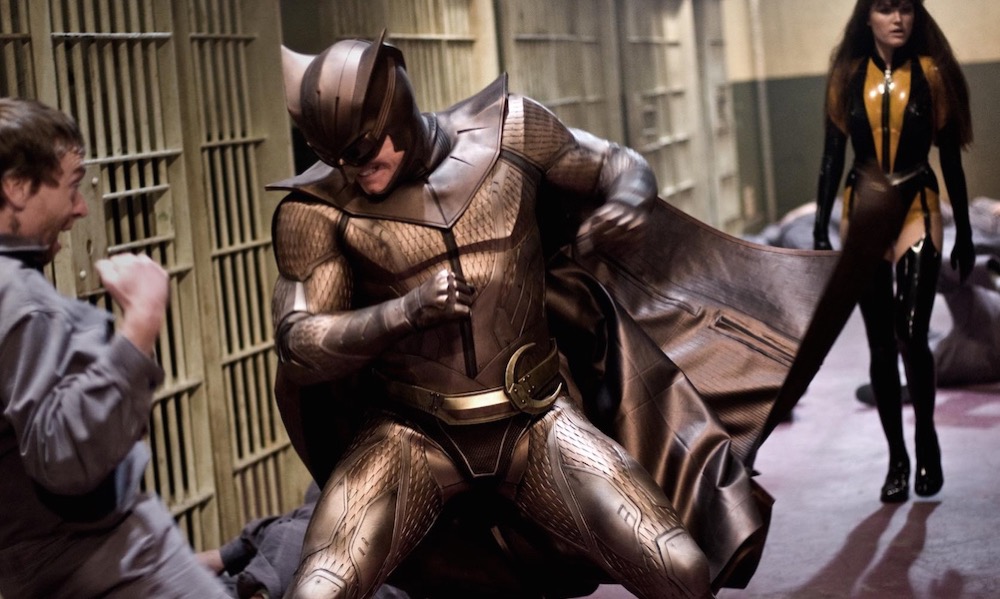 The alternate 1985 looks grim in Zack Snyder’s violent, and stylish, adult take on the superhero genre where the so-called heroes are all too humanly fallible.

A satirical take on the superhero genre, it is a darkly grim, and graphically violent take on the world it portrays. Snyder’s faithful adherence to the source material is the same approach he applied in 300 (2006). He seems to gravitate to graphically violent material, and he’s good at it. So far. Some people might disagree with that assessment after his Superman movie.

Watchmen is an entertaining film, that is visually memorable and impressive, but I must admit a growing lack of interest in these sorts of movies, which relies so heavily on the graphic violence they portray. If Batman v Superman is as good as these two films his future as a director is assured, but his career hangs in the balance depending on the reactions of fans and critics to his latest foray into the comics based stuff he has become synonymous with making.

The film takes place in an alternate reality, in the year 1985. It’s the height of the Cold War between the United States and the Soviet Union, as a group of mostly retired American “superheroes” investigates the murder of one of their own. The investigation results in uncovering an elaborate and deadly conspiracy, which exposes that their moral limitations may not be up to the challenge presented by the complex nature of the circumstances.

Moore’s meta-comic from around thirty years ago touched on subjects mostly avoided by mainstream comics at the time. These days those taboo topics are all in vogue. Society has become obsessed with the sexual orientation, and other personal details of the lives of the personalities we focus on in the celebrity worshipping society we live in today. Being openly gay has not only become commonplace in today’s world, but those that practice it are widely, and often, pandered to in movies, television, and commercials

I have to admit I have issues with the recent trend in the comics based material that these movies and television shows are based. The trend towards making these stories more gritty, grim, and “realistic” are not as reality based as they might on the surface seem. The results are a pretty gloomy, dark and dismal depiction of the world they portray. Films like these raise questions in my mind about what passes for entertainment these days. Is this what we are looking for in a movie?  A never ending parade of violent acts that people enact on each other graphically depicted in an orgy of violence that is the visual equivalent of a punch in the face, or a kick in the crotch?

To answer the original question about Snyder’s abilities as a director, requires first answering the question of what is the role of a director in the process of making a film? The word comes from a Latin term meaning guide. Is it to guide the actors in their interpretation of material? Is it just to make sure their appearance suits the material? Or does it go deeper than that? Should he/she attempt to imprint the source material with their subjective interpretation, or just follow what’s written like a cookie recipe?

If the answer is the former then in some ways, Snyder fails the test of what a good director should do, by strictly and stubbornly just adhering to the source material and not adding any personal interpretation of his own. That makes the material of origin paramount in the process and the role of the director that of a copying machine that only regurgitates what it’s fed.

Watchmen consists of a group of vigilantes that assume the mantle of a hero, but fail miserably to rise to the occasion their ambitions aim for; they are all too human in their fallibilities and revealed as nothing more than bullies in costumes. Remove the outfits, and you have an ordinary gang of thugs, you might find anywhere, that rely on violence to resolve situations they insert themselves into. The only exception to this is Dr. Manhattan, who has all but transcended being human, being the only character in the movie that has super powers. The success of the comics this film is the source of relied on sensationalistic aspects that are now no big deal.

The movie earned an “R,” rating for the violence it depicts in multiple forms on screen including murder and rape. The question becomes where do we draw the line before this sort of stuff sinks to the level of sexploitation and violence for the sake of violence?  These questions will require answers as the people that make these films search for new ways to portray the dark side of human nature and the conflict that results.

My point is life not just grim and dark; it is rather a blend of elements that sometimes include levity and humor. Life is ironic in this blend sometimes, with the humor arising out of those dark moments, and vice versa.

It’s not that I don’t think Watchmen is entertaining, it is, but at the same time it seems overly myopic and monochromatic in its single-minded intent to achieve its goal of being so determined to remain wall-to-wall dark and grim. It lacks the real flavor of life. By leaving those elements out, and we get short changed by movies that do this.

Fans today seek a more realistic version of the comics based films that come out, but these dark and grim depictions of reality are less real than they may seem. By excluding parts of life that do not comply with the rules of no levity that serve as a directive for this new brand of super hero films, these movies fall short of depicting life as it is. Movies like Guardians Of The Galaxy (2014) have not forgotten this, and are, to my way of thinking, better movies and stories because of it.

I haven’t seen it yet, but I suspect the super-hyped Batman v Superman would be a much better film with the insertion of a little humor and levity to give it a little flavor of the full spectrum of life.