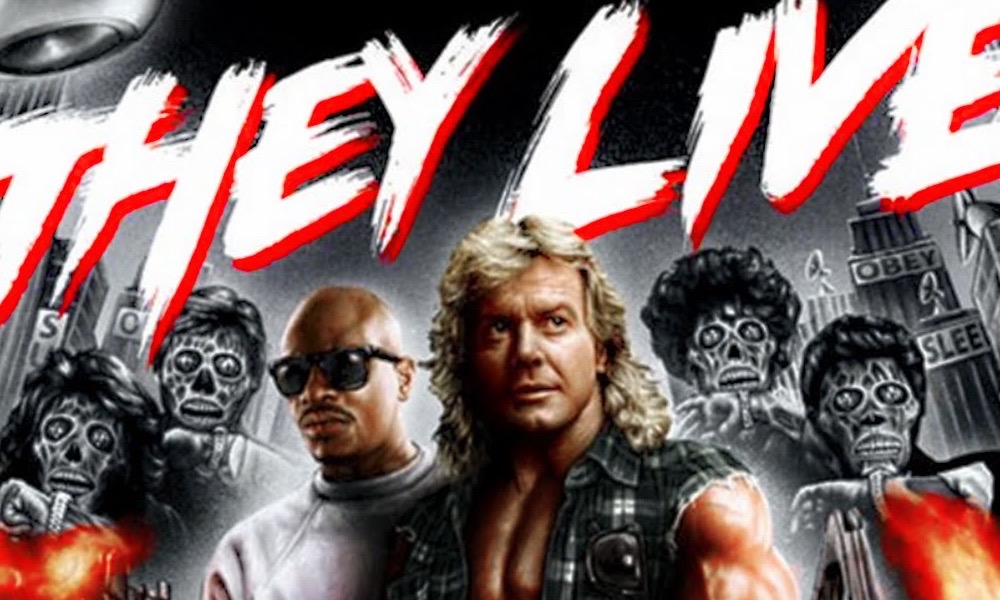 Almost thirty years ago, John Carpenter’s They Live eerily predicted the class warfare, the militarization of the police, and terror of random shootings that take place today.

John Carpenter’s They Live is an excellent example of this phenomenon, a brilliant social satire that depicts one man’s battle against overwhelming odds with an enemy that most people don’t believe even exist. They Live’s low budget look adds to the film’s appeal. The film achieved lasting results by using the devices of some cheap sunglasses and the simple effect of switching between color and black and white images to produce its dramatic impact.

The film, based on the short story “Eight O’Clock In The Morning” by Ray Nelson, almost seems based on our current reality. Some of its scenes eerily predict the militarization of the police and the brutality they employ in their tactics as weapons in the class warfare currently waged on the working class and the poor by the wealthy and powerful. There is also a scene that depicts the main character perpetrating a random shooting just like the ones that are too often the headlines of the news today.

I have to admit; I was very skeptical going in before watching this movie. After all, it featured WWF wrestling star “Rowdy” Roddy Piper as its leading man. Piper was an untested commodity in my mind and that of a lot of other fans at the time. Surprisingly he does pretty well, (or it might be more accurate to say his noticeably lousy acting does not detract from the film in a harmful way it ends up being part of its appeal) Keith David was then, as he is now, a reliably excellent character actor that helps improve this film by his presence in it.

Piper portrays the role of an average working-class Joe, facetiously named “John Nada” layered mullet and all, who suddenly finds himself faced with a whole new reality. It’s a world conquered and controlled by invading aliens that have managed to conceal their presence in plain sight by using a transmitter that hides their appearance along with the universal messages they have plastered everywhere you look.

These messages, are devised to subliminally send instructions to keep the general human population under control, and in a state similar to sleepwalking. They act as constant reminders to submit to the status quo, conform and be good little consumers who go about our lives getting married and reproducing to create more slaves for the comfort of our invisible alien masters. The messages have a core theme that promotes an agenda designed to keep us distracted by selfish, self-centered materialism, worship of money, and blindly conforming without ever questioning anything.

The story is simple enough; it is reminiscent of the themes in 1999’s The Matrix. Ideas about tearing away the illusions that conceal the true nature of the reality in which we dwell. The aliens know seeing through their illusions could easily be taken for paranoia and dismissed.

Down-on-his-luck John (Piper) gets into town hoping to find employment and does. He soon meets Frank Armitage (Keith David) who guides him to a transient encampment where he can stay. John stumbles upon a group of conspiracy freaks, and his curiosity about what they are up to leads him to discover a secret about the world that in turn freaks him out. Aliens are living among us in plain sight, that only he can see when he dons a pair of unique sunglasses. The movie is brilliant in its execution, in that it only requires a few simple (and cheap) props and effects for the story it tells, and how it relates it so effectively.

John does not handle the situation well, and he starts killing the aliens he sees after entering a bank. Violence, of course, draws the attention of the police. After kidnapping a woman, Holly Thompson (Meg Foster) to escape. John, after she gets the drop on him, and throws him out of a window, manages to reconnect with Frank who wants no part of him after hearing about John’s criminal activities.

When John tries to convince Frank to try the glasses himself, they have an argument that escalates into a fight, an extended knock down drag out fight of epic length. It lasts at least five minutes during which time, these guys kick the crap out of each other. Piper gets to show off his stuff and even throws in some classic pro wrestling moves. It is a pivotal scene in the movie, and lasts so long, and is so violent; it becomes oddly amusing like the violence in a cartoon. In a real fight of this length, and level of brutality, they would both be in the hospital for at least a few days, but seem to recover soon after it takes place.

Long story short, John, along with Frank, hook up with one of the conspiracy freaks. Because they now know the conspiracy is real, they get involved in a plot to destroy the transmitter to expose the aliens. Along the way they run into Holly again who tags along to help them complete their mission. Holly betrays them, kills Frank, and tries to stop John before he can finish his task. He kills her instead. On the roof, he is shot by police in helicopters just as he destroys the transmitter. As he dies, he gives the cops the finger and smiles

Of course, all of this is a relatively transparent and obvious social satire with the aliens representing the wealthy and affluent with their corporate agenda of conditioning people to worship money and be good little consumers, who always conform to the status quo. At the end of the film,  the destruction of the transmitter exposes the aliens as they go about pretending to be human, and people start to take notice. They Live never rises beyond being the B movie that it is, but it’s a good B movie, and still holds up pretty well, and after almost thirty years, it’s always a good fun watch that deserves its classic cult status.