SCI-FI NERD – The Hidden (1987): An Alien Psycho On The Loose With An Appetite For Fast Cars And Violence 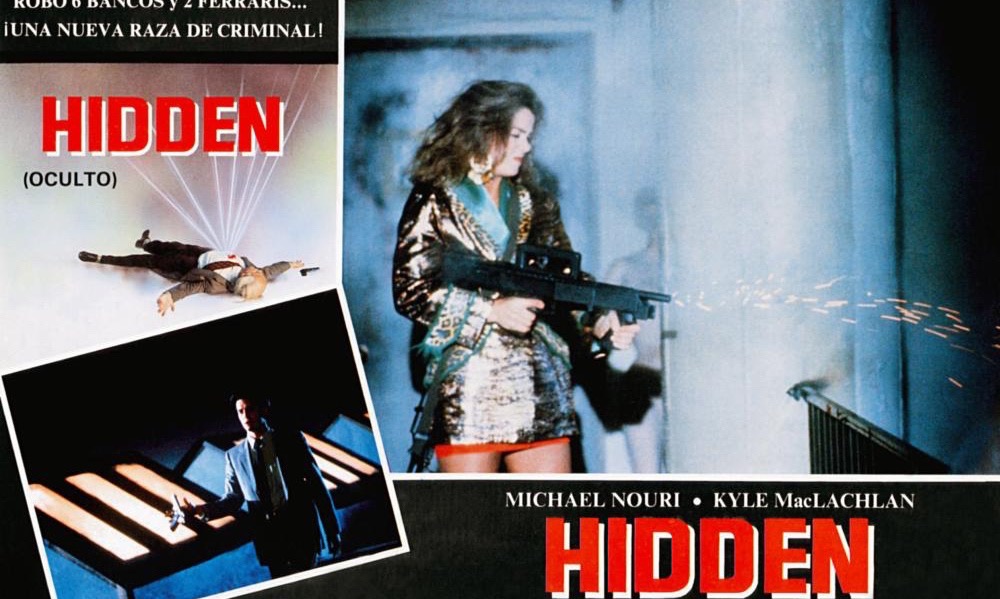 A tale of Alien possession set in the eighties as an escaped extraterrestrial prisoner takes human hosts to carry out a violent crime spree.

The Hidden is a real gem of a movie about alien possession, in this case, a body-swapping escaped alien criminal that can control whoever’s body it occupies at the moment. He’s an ambitious opportunist who at first ends up in the body of a middle-aged man with gastrointestinal issues and later with a sexy stripper until it comes up with a plan to possess someone with real power.

The idea of alien possession is not a new one. Early examples include 1956’s Invasion Of The Body Snatchers. In this case, the alien in question resembles a giant slug-like creature that enters the chosen host orally and takes control of the unfortunate person’s mind, speech and behavior. This alien is an escaped criminal, and a party animal, with a taste for loud rock music, fast cars, and violence. It treats its chosen vessel with contempt, seemingly without any regard for the punishment it might have to endure as a result of its irresponsible and reckless behavior, much like a cheap suit it got for free. When the suit gets worn out, it merely transfers to another.

The film was written by Bob Hunt (pen name of writer/producer/director Jim Kouf) and directed by Jack Sholder. The cast features Kyle MacLachlan and Michael Nouri and includes supporting roles by Clu Gulager, Chris Mulkey, Ed O’Ross, Clarence Felder, Claudia Christian, and Larry Cedar. Despite the fact the movie resorts to the B movie tradition of relying on sensationalistic violence and sexual titillation for added thrills, The Hidden is a fun ride filled with dark humor and some surprising twists along the way. It remains one of my favorite low budget entries into the genre.

The Hidden doesn’t waste any time getting started; it zooms out of the starting gate like one of the fast sports cars depicted in the film. The story begins with a bank robbery by an ordinarily quiet citizen, who kills all the security guards in the bank. This guy has no record of criminal activity or violence before this, but apparently just suddenly goes off the rails and into a life of crime. He flees the crime scene and leads cops on a high-speed chase across LA until he encounters a police barrier supervised by LAPD Detective Thomas Beck (Michael Nouri) The suspect, DeVries, is shot crashing through the barrier in the Ferrari he is driving, and gravely injured, is taken to the hospital. This event is just the beginning of several incidents involving ordinarily average people who suddenly turn to crime in the city.

Upon his return to headquarters  Beck and his supervisor, Lt. John Masterson (Clarence Felder), meet FBI Special Agent Lloyd Gallagher (Kyle MacLachlan), who informs them that Beck has been assigned to work with Gallagher to track down DeVries. When told of DeVries’s condition, Gallagher rushes off to the hospital.

Meanwhile, DeVries awakes in the hospital and seeing a man in the bed next to him; a sizeable slug-like creature appears, seemingly regurgitated by him over the sleeping man. Gallagher finds the gravely injured DeVries dead when he reaches the hospital.

Things continue to escalate at this point as the body-hopping alien criminal leads Beck and Gallagher on a chase across town leaving a path of graphically depicted destruction, and dead bodies in its wake. The manic alien criminal proves elusive and repeatedly eludes capture by managing to stay one step ahead of its potential captors

Eventually, as the escaped felon continues on his crime spree, he takes over the body of a stripper named Brenda (Claudia Christian) who is depicted having sex in a car with a random cat-caller she encounters on the street. Having sex with Brenda proves to be a fatal experience for the unfortunate man. Eventually, Brenda ends up in a shootout with Beck and Gallagher who end her brief role in the story by shooting her dead. Before she dies, she leaps from the rooftop where she lays injured, and the alien once again manages to escape by transferring itself to Beck’s supervisor Masterson’s dog.

Beck eventually finds out Gallagher is an imposter who took the place of the real agent, who is dead, and throws him in jail. Frustrated by the puzzling situation Beck eventually gets Gallagher to tell him what is going on. When Gallagher tells him the truth, explaining the extraterrestrial nature of the case, Beck is, of course, skeptical and thinks he is insane, leaving him in jail.

As the story nears its conclusion, the truth is finally understood by Beck,  as the alien criminal continues to shift bodies until it ends up inside Beck’s partner Willis, which it intends to use as a means of getting close to a presidential candidate who is in town.  Things reach a climax as the evil alien is eventually revealed and destroyed by Gallagher who has a unique weapon that is the only thing that can get the job done.

Beck is mortally wounded and as he is about to die the alien law enforcer inside Gallagher transfers his life energy into Beck’s body. The only one that knows is Beck’s daughter who after briefly hesitating seems okay with the switch, implying an oddly satisfying (but pretty creepy when you think about it) and a happy ending.