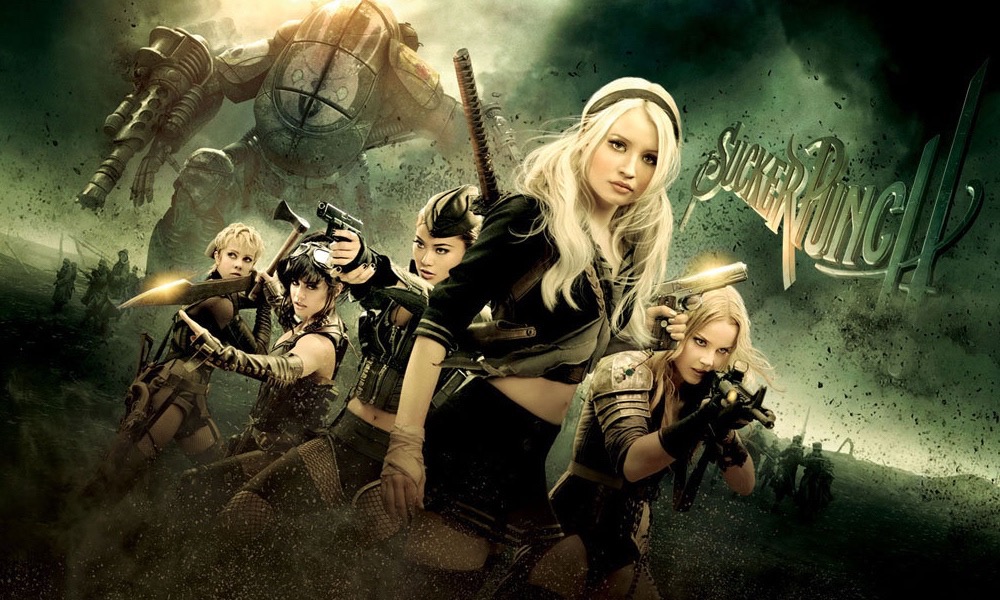 Is Sucker Punch just an eye-candy-filled guilty pleasure, or is this movie something more?

Director Zack Snyder’s Sucker Punch is a dark fairy tale of a story with visuals reminiscent of a pop music video/video game and imagery suggesting an erotic payoff that never arrives but still manages to be mesmerizing in its way. Suckerpunch is Snyder’s first movie based on original material co-written by him and Steve Shibuya. More than a voyeuristic fantasy, this sad and disturbing tale is in actuality a collection of allegories wrapped in a metaphor having to do with what women are called upon to do to survive in a world ruled by men, and how they must use their strength and intelligence to emerge victorious and whole.

The narrative of Sucker Punch explores one woman’s descent into madness and the fantasies she uses to escape reality. The surreal nature of the story in this film can make it puzzling at times, and it is sometimes confusing what is real and what is not, but it is a pretty good psychological thriller and a heartbreaking, tragic tale.

A brief synopsis:
Set in the sixties the story opens with the death of the mother of a young woman and her sister. Following the death of her mother, she and her younger sister are now under the parental supervision of her evil stepfather (Gerard Plunkett), a sexual predator. The young woman known only as Babydoll (Emily Browning) has fears for her sister’s welfare based on her own experience with the now widowed evil stepfather. This guy is a real piece of work and utterly contemptible.

After discovering the will of his now-dead wife he discovers it calls for her daughters to get all of her property and financial assets, he gets pissed and begins to drink. He decides to take out his anger on the girls and attempts to make unwanted advances towards Babydoll. When she resists, he chooses to go after the younger sister instead. When Babydoll attempts to intervene armed with a gun she has gotten hold of,  her shot goes astray and tragically kills the sister she was trying to protect. Babydoll is charged with the crime of her death and sentenced to serve time at a mental institution called Lennox House.

At this point, the line between reality and what Babydoll imagines begins to blur. She withdraws into her traumatized mind and begins to create fantasies based on her surroundings and the people that populate it. Despite this, part of her makeup is about survival, and observing how the place works, she devises a plan to escape.

Arriving at the forbidding place, we meet the head orderly Blue Jones (Oscar Issac doing his best to portray menace and creepiness). The stepfather bribes him to forge papers ordering a lobotomy for Babydoll to prevent the truth of his crimes from being discovered. They discuss this in her presence as if she isn’t even there to hear.

Babydoll fantasizes about the place as a bordello where the inmates are sex slaves and perform as dancers/strippers as a way to attract guests. The institute’s psychiatrist Dr. Vera Gorski (Carla Gugino) becomes a dance teacher/madam of the place. Her fellow inmates/dancers are all women in her age group, and they are Amber (Jamie Chung), Blondie (Vanessa Hudgens), Rocket (Jena Malone), and Rocket’s sister and “star of the show,” Sweet Pea (Abbie Cornish). In this fantasy when Babydoll is asked to dance, her performances are compelling beyond the norm, and she earns the respect and admiration of her peers. She is a modern-day Salome whose dances mesmerize anyone who watches. The entire plot hinges on this ability she has symbolizing her sexuality. None of Babydoll’s dances appear on the screen; they get left to our imagination.

While she is performing this first dance Babydoll’s mind conjures a wise man/guide (Scott Glenn) who tells her she has the inner strength and ability to accomplish her task. He gives her weapons in the form of a samurai sword and gun to aid in her fight. Immediately after this she is confronted and attacked by three giant samurai dressed in the style of medieval Japan, which she defeats with relative ease. After this initial performance, she reveals her plan to escape to the others, who agree to help and escape too. The idea revolves around acquiring four objects: a map of the institution, a lighter or something to set a fire with, a knife in case of trouble, and the master key Jones keeps around his neck on a chain.

Each object becomes a mission they must accomplish and each task can only be accomplished if they work together. The inmates plan to use Babydoll’s performances as a distraction while the missions are carried out by the other girls in the group. At this point, the tasks become fantasies within  Babydoll’s fantasies depicted as fantastical, violent adventures the team of women experiences.

Each adventure takes place in a different setting, and the wise man is part of these fantasy scenarios too and lays out how each mission can be carried out. The adventures are fun, exciting, and action-packed CGI thrill rides. The first takes place in a setting reminiscent of WWI  with trench warfare and period aircraft, and with an army of steampunk soldier robots that fall like characters in a video game. The group is well-armed, along with a giant flying Mecha suit piloted by Amber straight out of anime.

The next mission is an assault on a castle with sub-human warriors and has a goal of gathering some stones from the neck of a baby dragon whose throat they cut. The mother dragon is naturally upset about the death of her child and attempts to kill the girls in a thrilling aerial battle, but finally gets defeated by Babydoll and the group.

Finally, the last mission is a classic train job scenario on a futuristic alien planet. The job requires defusing an enormous bomb and fighting an army of robots with faces that look like mirrored sunglasses.  This mission falters, and in real life, Rocket gets killed when she is stabbed by the institution’s cook when the group tries to steal one of his knives.

Blondie rats out her companions. Jones goes crazy, and he confronts the group and Babydoll. It has only been a week since she arrived in reality, and the trouble started with her arrival, and Jones knows it. He takes out his anger on the others by killing Amber and Blondie and by putting Sweetpea in isolation in a padded cell. He attacks Babydoll but she stabs him with the knife they have stolen, and she takes the key freeing Sweetpea. They decide to put the escape plan into action and nearly escape when they encounter an unexpected obstacle in the form of a group of men outside the place. Babydoll realizes she has to sacrifice herself so Sweetpea can survive, and confronts the men.

The film ends with Sweetpea getting away on a bus while Babydoll gets a lobotomy, after which it is discovered Jones forged the papers and he is hauled away by the cops. We last see Babydoll with a blank expression on her face. Ironically, she has finally achieved the escape she sought.

The cast is appealing and competent, and the adventure episodes are a lot of good escapist fun. The film has some excellent period touches in the form of apparel worn by some of the characters. At first, Suckerpunch seemed like another one of those “women good and brave – men bad” stories until you remember the wise man character was an ally representing there are good men in the world too. After last revisiting this film, I came away with a greater appreciation for it and a better opinion of it than I previously had before. Although on the surface it appears to be nothing more than sequences of eye candy with a catchy soundtrack, it is more than that. It may not be great cinema, but it deserves more respect and recognition than it got from fans and critics alike.