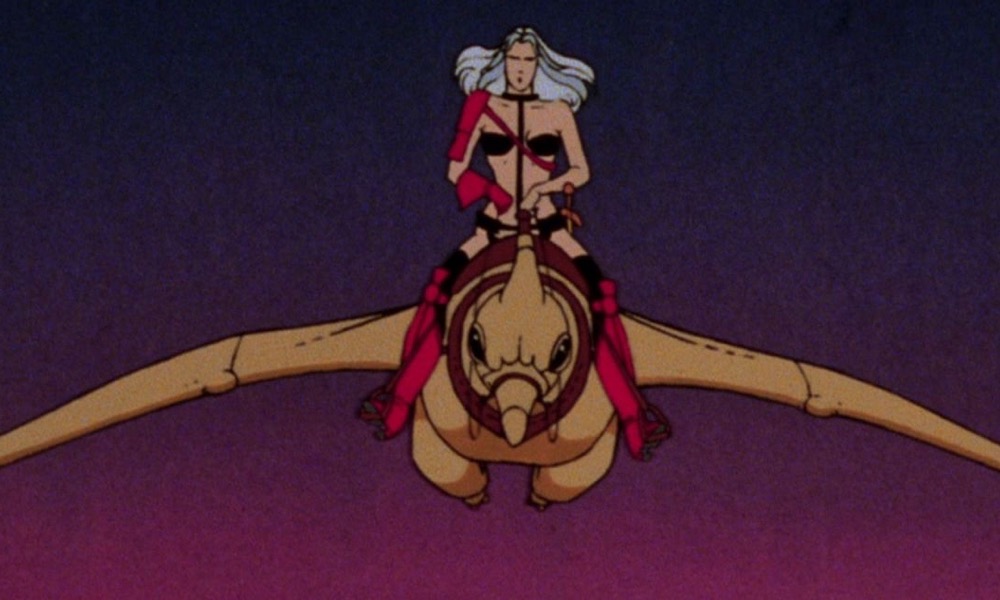 This film is a shameless mockery of a great game-changing magazine that was a revelation about what comic books could be at the time, and a reminder that cartoon boobs and sex do not an entertaining film make (at least not in this case).

This is not a good movie, it pales in comparison to the magazine it is named for, and in comparison to any other attempt at a genre animated film that comes to mind. With the exception of one of its parts and a few other brief moments, it is an utterly lazy and close to worthless mockery of what it pretends to be. Obviously aimed at the stoner demographic, maybe they thought the audience would be too stoned to notice what a lackluster job was done on this film.

The first time i saw Heavy Metal magazine it blew my mind, this was the comic book of my dreams without me having previously realized it. The quality of the art, and the stories portrayed between its covers were revolutionary at the time compared to anything i had seen before outside of a few examples of hippy age efforts that were few and far between.

As many fans know Heavy Metal is an American science fiction and fantasy comics magazine, known primarily for its blend of dark fantasy/science fiction and erotica. In the mid-1970s, while publisher Leonard Mogel was in Paris to jump-start the French edition of National Lampoon, he discovered the French science-fantasy magazine Métal Hurlant which had debuted January 1975. The French title translates literally as “Howling Metal”.

Back in those days I was fortunate enough to have a friend who traveled abroad, and knowing my taste for graphic books, brought me back a few copies of the French magazine that i perused over and over until the pages were worn thin. The artwork, and stories were amazing and were an eye opening experience. Comic books had come of age. After that, this film is a very disappointing experience.

I think the creators of this film had in mind to create an amusing, more lighthearted version of the magazine on film. They failed. The film begins with an episode titled Soft Landing written by Dan O’Bannon which introduces us to a primordial evil in the form of a glowing green object called the Loc-Nar, This object begins to tell its history to a girl (while boring us) whose father it has just killed, by relating the stories that follow.

With the exception of one segment of this anthology of stories titled Harry Canyon, written by Len Blum, with a story that is a sort of a mash-up of The Maltese Falcon, and The Fifth Element, for the most part, the stories and artwork in this film are of very poor quality that depend on cheap sensationalistic portrayals of cartoon boobs, and cartoon sex (poorly done) in place of good stories and well done art work, the qualities that made the magazine its named after such a success.

They even included a less adult version of the original story of Den by Richard Corben which appeared in the first American edition of the magazine i ever saw. The classic story loses much of its original appeal in its translation to the screen, and fails in so many regards i suspect the films creators were high enough on something to make them delusional about this segment of the film being good. Revisiting this film i was appalled at the notion i once considered it worth watching. It is not.

The anthology the film portrays is composed of stories, including the two already mentioned. The rest of the stories in the order they appear are: Captain Sternn written by Bernie Wrightson, B-17 written by Dan O’Bannon, So Beautiful And So Dangerous written by Angus McKie, Taarna (inspired by Moebius’ Arzach stories) written by  Daniel Goldberg and Len Blum. With artwork even slightly as wonderful as Moebius’ own, and a better story, this could have been the best part of the film. Instead it is a sad and pathetic attempt to cash in on that great artist’s work.  These episodes are followed up by a hastily created fairy-tale epilogue of an ending featuring the girl character that ties all the stories together.

The soundtrack, one of the things meant to make the film work as an artistic effort is also weak. Composed of some classic rock hits of the time, they are poorly utilized to ad any oomph to the film, but serve only as background music for the most part.

I can only surmise this was a classic case of take the money, and run. A bunch of people convinced some other people to put up the money for this project and then blew the money before realizing they still had a lot of work to do and produce a film, and this was the result. I cannot recommend this movie, it is underwhelming and deeply flawed. I admit I had fond, but vague memories of this animated genre movie before watching it again recently, but my advice now is don’t bother.