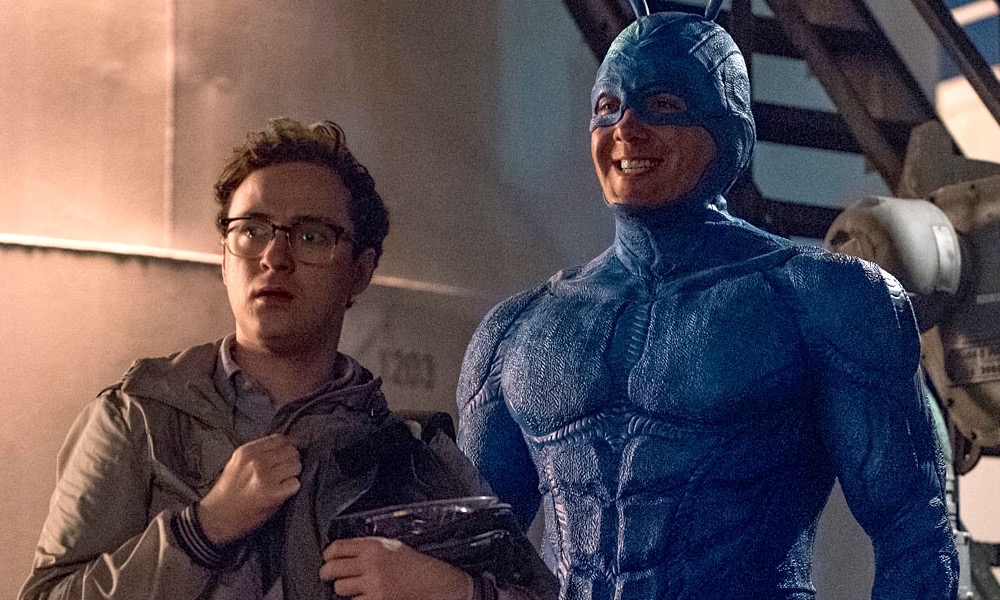 This time around the blue superhero is not as large, and decidedly creepier than we have ever seen him before, additionally, the portrayal of the character registers as more psychotic and less comical than ever previously depicted.

Amazon’s version of the Tick is wonderfully weird and intriguing. Whereas the focus of the animated series (1994-1996) about the character, and the world he lived in, was intended to be amusing. The Patrick Warburton (2001) live action series pretty much attempted to be a live action version of the same approach as the previous animated show.

This new edition brings on the weird. It really brings home just how strange and surreal it would be to have a character like this exist in the real world. This time the Tick is a no holds barred nut. He’s disturbingly insane and disturbed, and it’s not clear if he’s even human, or where he comes from.

He looks different, and it takes a little getting used to. Some people might not like the new costume, but his voice is right on target. The context of the show is more grounded than it has ever been in its earlier incarnations, but the tongue-in-cheek vibe is still there, as well as some satire of current superhero movies.

This time around, Arthur Everest (Griffin Newman), is depicted as a man who had his life shattered by a traumatic event he suffered as a child. He’s on medication as a result of his experience; a close encounter with the personification of evil known as the Terror (Jackie Earle Haley), who was responsible for a ship full of supers crashing on his dad and killing him. This event was witnessed by Arthur when he was still a boy. In the show’s flashback of the scene, The Terror had created a virus that eats people’s eyes, and it made the supers blind, causing the crash. Barely recognizable, Haley is effectively scary and menacing as the show’s main villain.

To make matters worse, the villain took notice of the boy during the incident and took the time to scare the kid even more by interacting with him in an up-close and personal manner.

The encounter left Arthur a famous icon of sorts, whose photograph taken by a bystander when it occurred, and gained national attention. Apparently the encounter left Arthur a mental patient, who is unsure what’s real and what isn’t (he hears voices), and while the rest of the world is convinced the Terror is dead; killed by Superian, a popular costumed super who exists in the world the show takes place in, and who appears on a talk show hosted by Whoopi Goldberg, Arthur is convinced the Terror is still alive, and conspiring to do something terrible soon.

The episode begins with the arrival of an extraterrestrial object arriving on earth, over rural Finland, or some place like it, and emitting a wave of energy that affects and changes the world. The event is referred to as the birth of the age of the supers. It is nicely depicted as something very science fiction-y in nature and visually very cool. Apparently, the world has not been the same since the object arrived.

A few people were suddenly endowed with super powers, and a lot more who wanted to be among their number apparently donned costumes in an effort to be like them also

The show rejoins Arthur years later as a man who is still convinced the Terror is alive. He goes out at night following clues as to what the evil doer is up to. He spies on people he suspects is in league with the super villain and gets arrested when he is spotted by police lurking in places he shouldn’t be in. Because of his fragile mental state, Arthur’s sister, Dot (Valorie Curry) is his legal guardian, she cares for him, but is skeptical about his conviction the Terror is still around and up to no good.

To make matters worse, Arthur hears voices and sees things no one else sees. He hears one voice, in particular, a voice that engages in a relentless barrage of bad allegories and metaphors as a way of communicating what it wants to say in what ends up as a nearly indecipherable stream of cryptic gibberish.

His apparent hallucinations take on a physical form in the shape of a blue garbed masked individual who keeps insisting they are being called by destiny to act on Arthur’s impulses to engage in a fight against evil and make the world a safer place.

This, of course, is the Tick, who suddenly appears to Arthur, who isn’t sure if he’s real or not. He is shown attacking the criminals Arthur was spying on and wiping them out without effort, he’s bullet proof and extremely strong. There’s one scene of him discovering a roomful of criminals with guns who all begin shooting him. This scene is effective in conveying a disconcerting side of the character not previously shown in earlier depictions. The earlier versions of him all treated the character as comical, and that’s where this version differs. This time around the Tick is a little scary and creepy too.

After their encounter and his subsequent arrest, Arthur goes home and wakes to find the Tick in bed with him, which Arthur finds very disconcerting, as anyone would. The blue garbed visitor breaks several things around the place in an attempt to find a secret headquarters he’s sure must exist.

The Tick leaves a small piece of luggage he says was the only thing left worth saving from his encounter with the criminals, and then leaves after exhorting Arthur once again to join him in a partnership to fight evil. He tells Arthur he can find him on the rooftops.

Later we are introduced to an evil looking woman, Ms. Lint (Yara Matinez), who was seen earlier at the crime scene, inspecting the contents of the case now in Arthur’s possession. She returns to inspect the scene of the Tick’s destruction of the former location of the criminal activities. She is informed of the Tick’s  abilities as a super and his description by the survivors of his rampage.

Next, the scene shifts to Arthur’s apartment, where he has gotten curious enough to check out the contents of the suitcase left by the Tick. It contains the Moth costume. This time around it’s gray instead of white, it’s bulletproof and high tech, with goggles that pop into place at the push of a button on his wrist, and wings that unfold in the same manner. The goggles provide some sort of digital display screen that automatically appears when they are engaged. It’s actually kind of cool looking in an odd sort of way. No mistaking it for a bunny costume this time.

Just as Arthur dons the suit, Ms. Lint arrives with several gun wielding thugs at Arthur’s apartment and they begin shooting. There is no explanation of how the bad guys tracked Arthur to his apartment or even why they’re looking for him instead of the Tick. The episode ends there.

This was enjoyable, and an oddly amusing pilot for a series that seems to hold some promise as being quite interesting, entertaining and good. I liked it. In fact, I have watched it several times. Bottom line is, it’s worth checking out, and hopefully the rest of the series will be made and see the light of day, or night, whenever it’s convenient for you to watch.

It’s probably a good idea to keep in the mind the very odd nature of the approach this time around,  as compared to what we have experienced in earlier versions of depicting this character and the world he lives in. Expect something different, because that’s whats in store. Happy viewing.