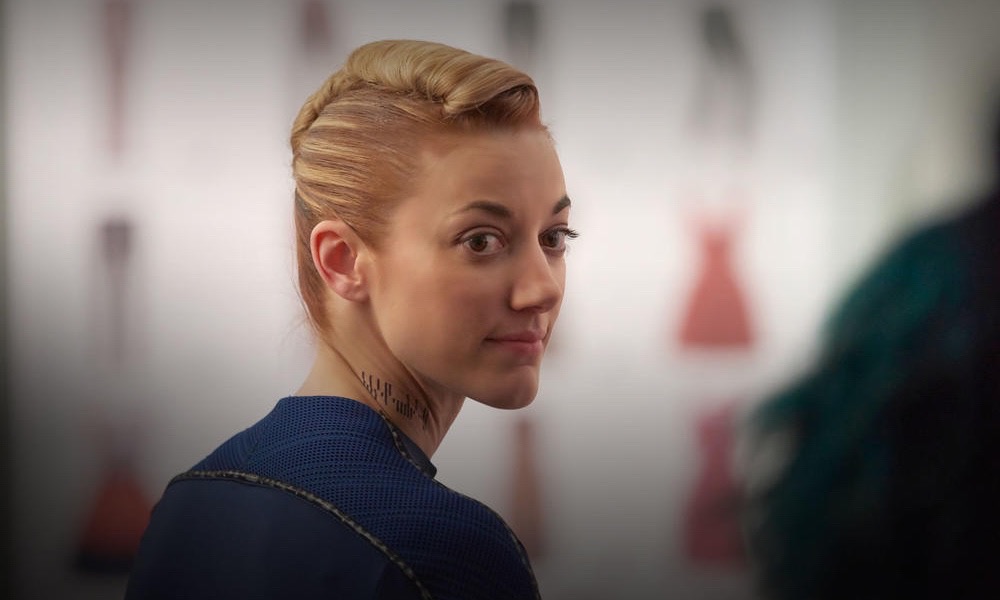 The Raza crew is suffering from dangerous hallucinations, and the mystery of what’s causing them leads to an unexpected revelation.

The idea of which is real, the dream, or what we experience when we are awake?, is the subject of this week’s episode. Its an old story that dates way back in the history of humanity, and has been done in science fiction shows before. This time around, making the wrong choice of which is which by Ann could prove deadly to the crew.

This is not the usual sort of episode we have come to expect from this series, which is usually more action and adventure oriented, and usually involving a heist or some other sort of caper. The show trades in its usual fare for an episode more psychological in nature this time around, and does a pretty good job with it too, in a story flavored with mystery and suspense. This episode is a deviation that makes a good impression of  the show’s ability to embrace a wider scope in the sorts of stories it can tell.

Here’s a recap, laced with  some comments (*warning, spoilers follow*)

Take The Shot begins where last week’s episode left off. Ann goes to her recharge station and wakes to find herself in unfamiliar surroundings. Its a house in the country, and outside there is a winter setting complete with some trees. When she gets up to check the place out she is joined by Victor (Brendan Murray), the android that is part of the group of androids passing themselves off as human. He’s the android that gave her the upgrade. Ann looks pretty hot in her casual civvies, and in her dream they kiss, and start to get intimate.

Ann is smart enough to know her experiences on the ship are her reality. She reports the dream to Two, and when the rest of the crew gets involved it becomes a discussion about Ann’s reliability, and whether she can be trusted, because she made a mistake when they were involved in last week’s adventure.

It wasn’t s serious mistake, but Ann’s holographic simulation is there and insists that Ann is malfunctioning and the crew is not safe as long as she is not working properly. She’s in favor of rebooting Ann and returning her to factory default settings. Its a very odd scene with the two versions of the same character bickering back and forth, I was in agreement with Three who asked them to take it down a notch

Of course this opens the whole can of worms about her being different, and if  Two was actually the one that made her that way, and why. The result of all this is they decide to take her offline and return her to her recharging platform until they can figure out what to do. This means the crew will have to manually do some of the monitoring Ann usually does while she’s online.

Ann’s not the only one seeing things that aren’t there. Four spots something that makes him suspicious, and when he goes to check it out, he finds Misaki Han (Ellen Wong), the sword wielding woman from his home world of Zairon, who tried to kill him before, and starts trying again when he finds her inexplicably on board the Raza. They fight and she wins, running him through his midsection with her sword, but as he sits there bleeding, a strange thing happens. She disappears, as well as his bleeding wound.

He’s not the only one affected, he severs a pipe with his sword during his imaginary fight, and when  the resulting coolant leak shows up on the bridge’s instruments, Two goes to check it out, but begins hallucinating on the way. She sees some of Rook’s men who capture, and are threatening to disassemble her and she thinks she’s about to die, because she cannot escape them.

Five notifies Six and Nyx  when she loses contact with Two, and they find her alone and not moving. When Six rouses her out of her dream state she begins to strangle him. because she’s still in her imagined situation, and Nyx is forced to knock her out.

This leaves Three, who is in his quarters when he suddenly sees  Sarah (Natalie Brown), his ex-lover who died. She begins to convince him she’s real, and he should kill himself so they can be together. Boone  knows its got be a dream or something at first, but she begins to wear him down, and he’s close to pulling the trigger of a gun he has to his head, when Six enters him room just in time to stop him from killing himself.

Six, Nyx and Five are unaffected, but they all now know that  something odd is going on. At this point, I suspected it might be they were being targeted by a weapon being used by one of their enemies. Of which there are plenty at this point, but I was wrong.

It turned out that it had to do with the mental link they used to restore their memories earlier in the series, and its being caused by a virus in the ship’s computer system. Holographic Ann tries to convince them they are under attack by the real Ann who is causing all of this stuff to happen subconsciously somehow.

She is adamant that the only way they can be safe is to terminate Ann, before things get worse, and sure enough the ships systems begin to fail and it looks like they are doomed unless they kill Ann.

Holographic Ann is becoming more and more demanding in her determination to get the crew to kill off the real Ann. She transitions pretty effectively into an evil entity from her normally neutral way of expressing herself, showing off the acting skills of Zoie Palmer as the android (Ann), who I already knew was an excellent actress, but is doubly impressive this time around.

Meanwhile, the actual Ann is defenseless on her recharge platform while all this is going on, She is back in her dream, but suspects that something is wrong when a tv in her dream starts talking about the Raza being under attack in a newscast.

Holo-Ann convinces the crew they need to kill  the real Ann before they all die, and they nearly do it, but, at the crucial moment, Boone hesitates and can’t go through with it. He has more feelings for Ann than he could ever admit, and that’s probably true of the others too, except Five who has always shown she likes the android a lot.

Fortunately, its brainiac Five to the rescue again, and she figures out that Ann is not the problem, but  may actually represent their best chance for survival. She figures out the virus being activated coincided with the activation of  holographic Ann. The hologram turned evil is the virus personified, and is soon revealed as a deceiver and liar. Later, they figure out the virus was probably a parting gift from  Commander Truffault , who they tricked out of getting the Blink Drive and the Raza.

Things get dire when the atmosphere inside the ship begins to become unbreathable, because the virus is causing toxic stuff to leak into the ship’s air. Two dons a space suit, while the rest of the crew escapes the toxic air in the Marauder, and attempts to go remove the ship’s computer core, but she is delayed by the evil version of Ann who makes her magnetic shoes three times heavier than normal gravity.

Right then the real Ann arrives. She woke herself up out her concern for the safety of  the crew and somehow knowing they were in trouble. Two instructs her to remove the computer core, but as she begins to carry out her instructions, the evil Holo-Ann tells her she will kill Two if she doesn’t stop. Two tells her to do it anyway, and evil Holo-Ann’s attempt to kill her fails. As Ann removes the computer core the evil version of herself disappears.

Despite the fact we have come to expect high adventure and action from this series, it successfully pulled off this departure from its norm nicely, proving the show is more versatile that it may have seemed before.

The story, of course,  mostlyserved to reaffirm Ann’s relationship with the rest of the Raza’s crew, that they need her, and that she really belongs and is part of team. The episode’s writers pulled off a really pretty sentimental story in a manner that made it seem like something else entirely. Good job from Mallozzi and Mullie, a writing team that continues to impress. Only three episodes left, if I were a gambling man, I’d wager the next three episodes are gonna kick ass. Happy viewing.