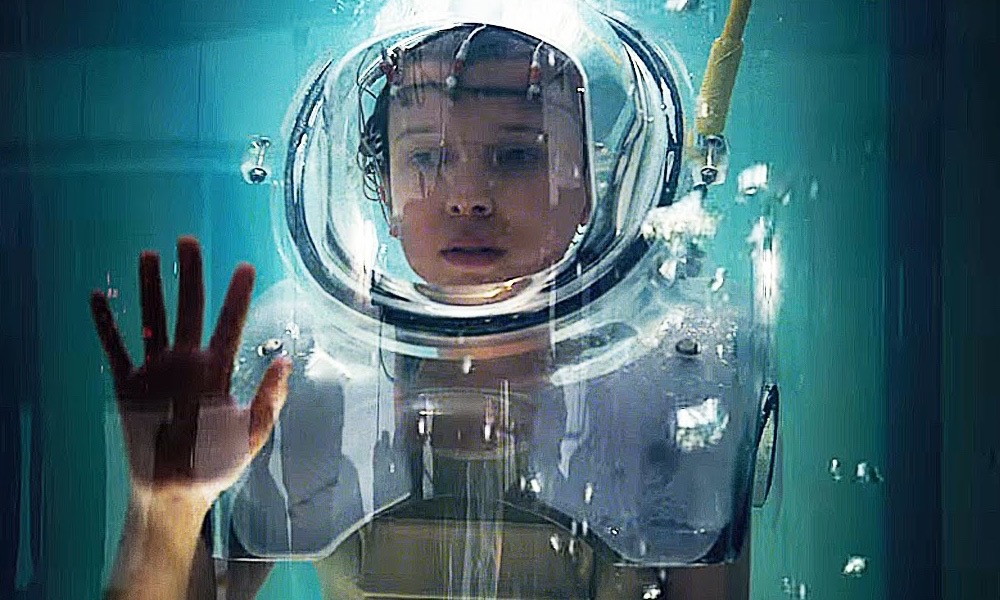 This 8 episode long Netflix series reminded me of what might happen if Steven Spielberg ever directed a movie based on a Stephen King story.

Stranger Things is an American supernatural science fiction horror web television series created by the Duffer Brothers for Netflix. It was written and directed by Matt and Ross Duffer and executive-produced by Shawn Levy.

Big on nostalgia, Stranger Things seems pleasantly familiar. Although it’s a series, it more closely resembles one long movie. It’s reminiscent of a lot of things, First and foremost the classic stories by Stephen King. It has a lot of the flavor of Stand By Me (1986), based on King’s sentimental story “The Body”, about friendship and a small adventurous experience taking place in a small town, told in the past tense by one of the characters in the story. The style in which the series is done is reminiscent of Steven Spielberg.

The show is set in 1980s Indiana and is an homage to 1980s pop culture. It has a strong aesthetic about it of that now long past decade. The story the series tells mostly revolves around a group of not very popular middle school nerds, and the events that develop when one of their group of friends goes mysteriously missing. The series also reminded me, in ways, of Steven Spielberg’s ET: the Extra-Terrestrial (1982).

The ensemble cast of this series makes a good impression. Most of the screen time in this production is spent on the child actors that portray the kids in the story. They do a thoroughly good job, and their performances never distract from the effectiveness of the show’s narrative.

The cast includes Wynona Ryder who is barely recognizable as the very neurotic Joyce Byers,  a suburban mom who is already a little crazy before disaster strikes and her son Will disappears without a trace. Ryder’s performance is really over-the-top as Joyce, who is damaged goods, and seems destined for a stay in the looney bin. Her singular behavior is taken in stride by the rest of the small town’s population.

The cast also includes David Harbour as Chief Jim Hopper, the police chief of Hawkins Police Department, and one of the main recurring characters in the show. Hopper divorced after his daughter died of cancer, which has caused him to lapse into drugs and alcoholism, and when he gets involved in the mystery of Will’s disappearance the production takes on the flavor, in parts, of a classic noir private eye film.

Also playing major roles in the story are Natalia Dyer as Nancy Wheeler, the daughter of Karen Wheeler, older sister of Mike Wheeler, and the girlfriend of Steve Harrington.

Seemingly conventional, she is just learning about life and exploring the new frontiers of being a teenager, trying to balance her values with her emotions, hormones, and responsibilities.

The series includes Charlie Heaton as Jonathan Byers, the older brother of Will Byers and the son of Joyce Byers. Considered an outsider at school, he is a kind and quiet teenager and a talented photographer. He is very close with his mother and brother. He also has a secret crush on Nancy Wheeler.

The three friends are played by Finn Wolfhard as Mike Wheeler, the son of Karen Wheeler and younger brother of Nancy Wheeler, and one of three friends to Will Byers. He is shown as an intelligent and conscientious student and is very committed to his friends. Gaten Matarazzo as Dustin Henderson, part of the clique of friends that include Mike, Will, and Lucas. He is a fan of comic books and a very logical tween. He doesn’t have his permanent front teeth because he has cleidocranial dysplasia, which causes him to lisp. Caleb McLaughlin as Lucas Sinclair, a member of the clique that includes Mike and Will. He is outspoken and Mike’s best friend.

The four, including Will, get together in Mike’s basement to play Dungeons and Dragons, a ritual gathering they take very seriously, and that serves as a foundation for the rules that govern their friendship. The villain in the story in a supporting role is Matthew Modine as Dr. Martin Brenner, one of the main scientists at Hawkins Laboratory, a local business with government ties. He is shown as an elegant man, and ruthless in his pursuit of his scientific inquiries. It was a pleasant surprise to see Modine suddenly reappear in this production after not seeing him in anything for such a long time.

The real key to the story is Eleven (Millie Bobby Brown), a young girl with psychokinetic abilities and limited vocabulary. She becomes close friends with Lucas, Dustin, and most notably, Mike. Her name is based on a tattoo she has on her wrist. She is the basis of a series of experiments being conducted by Dr. Brenner, who pretends he cares about her, but in reality is only interested in what she is capable of and how he can exploit it.

The young actress is charming, memorable, and fascinating in the role of the young girl with special abilities, and her performance is quite enjoyable. Again, this show reminds me of another Stephen King story that became a movie, Firestarter (1984), in keeping with the show’s tribute to 80’s pop culture

The story involves parallel universes, and when one is opened by Eleven by mistake, it opens a portal to a world inhabited by a monstrous creature similar in characteristics to a humanoid shark, a frightening, faceless predator that can sense, and is attracted by blood. It takes its victims back to the dark dimension where it dwells as a way of storing a food supply for future use.

The series requires patience, as it slowly develops at a leisurely pace over eight episodes, in what is maybe better described as a miniseries that seems somewhat movie-like in nature.

Clues finally begin to reveal what is actually going on along the way, in what at first seems to be another tragic tale of a murdered child, that is being drawn out way too long, but soon begins to reveal itself as something more, something fantastic. The payoff is worth it in the end, as more, and more of the gothic horror and science fiction aspects of the story are exposed.

Stranger Things also explores and depicts aspects of life in a small midwest-mostly-white-town, and also depicts the nightmare experience that is middle school in its scope, which gives the story, and its characters, some added depth. This world is inhabited by monsters too.

Ultimately the story has a melancholy ending, because when the monster is finally defeated its because Eleven sacrifices herself to save her friends. When the missing boy is finally found, his location in the dark and grim environment of the beast is reminiscent of another iconic film from the past Aliens (1986), and the stuff covering the walls in that genre classic. It seems obvious to me that this production’s creators are big fans of both Spielberg, and Stephen King, not to mention numerous other sources from the past, because there is little doubt this series was greatly influenced by their work, and they took some of the elements from various sources and recombined them into this neat little package that, while it’s not the most original production I have ever seen, is thoroughly entertaining and pretty darn good. A  second season is scheduled to premiere October 31, 2017 — on Halloween, of course. [review]