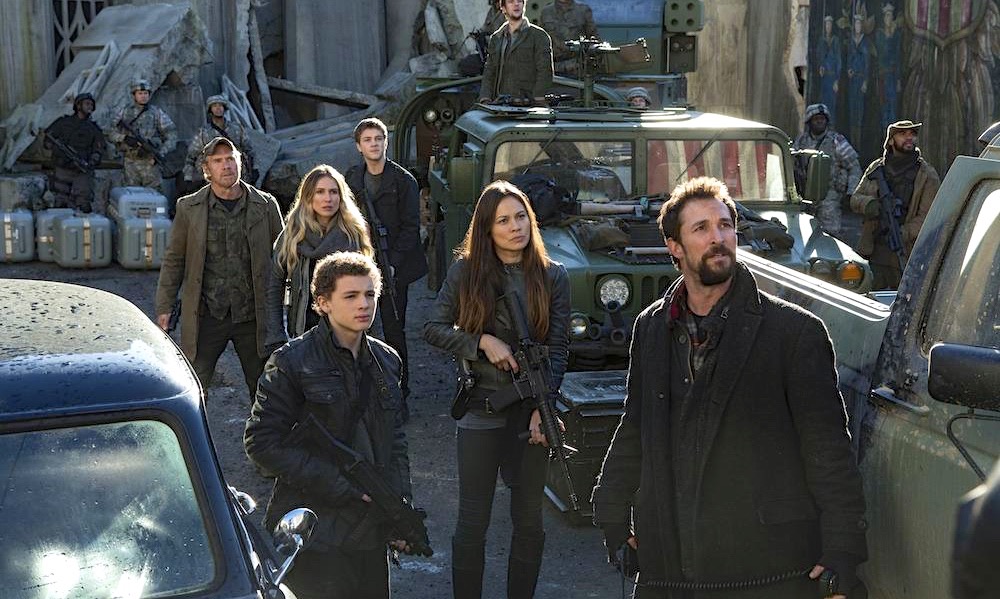 TNT’s alien invasion series had its moments, but it never really captured my mind and my heart,  so I am thinking of watching it again to see if it can change my opinion of it.

Falling Skies was a recent American science fiction post-apocalyptic dramatic television series created by Robert Rodat and executive produced by Steven Spielberg. The series stars Noah Wyle as Tom Mason, a former Boston University history professor who becomes the second-in-command of the 2nd Massachusetts Militia Regiment, a group of civilians and fighters fleeing post-apocalyptic Boston following an alien invasion that devastated the planet six months before the events of season 1.

Falling Skies begins six months after a global invasion by extraterrestrials, wherein only days, the invaders neutralized the world’s power grid and technology, defeated and largely destroyed all the world’s militaries, and killed over 90% of the human population by destroying all of the world’s major cities and capitals.

So what’s not to like right? The show used the grim and gritty approach to telling its story. It was as grounded and realistic as could be expected, short of portraying the true incomprehensibly terrible nature of war too horrific for network tv. It had the requisite alien antagonists with some advanced alien tech. War machines, some in the form of mechs that added a nice touch and added a reminder of the alien menace the show was about. It had some effectively creepy alien foot soldiers known as “Skitters”  that were reminiscent of giant spiders that gave the humans struggle a suitable face to pin their struggle on, despite the fact, the real alien menace chose to remain behind the scenes, at least at first. They are the mysterious species known as the Overlords, or “Espheni”, presumably the actual engineers of the invasion and the masters of the Skitters.

On the human side, the show worked the themes of familial love and loyalty a lot, in addition, it also worked the usual wartime tropes of wartime stories have seen so often in war movies; heroism, cowardice, sacrifice and loss. There were also the anthropological issues the show dealt with in intelligent manner. the tendency by people to form tribal alliances and change allegiances for reasons that were not always rational It had all of the elements that should have added up to a great epic science fiction/wartime series, but somehow it failed to win over my mind and heart.

There were times watching this series when it felt like the personal drama was outweighing the part of the narrative about the aliens and the struggle to kick them off the planet, but maybe that was just me. That’s why I am going to give it another chance and watch it again. Hopefully, it has been long enough that I can watch it fresh eyes. Al, o it makes a difference watching it binge style and not having to wait a week for the next installment.

I did like the cast for the most part,  the show worked hard to make the cast seems like regular folks going through a nightmarish ordeal.  A lot of its focus was on Tom Mason (Noah Wyle), his evolution as a soldier and his emergence as a leader who uses his intellect  based on his knowledge of history  to successfully determine strategies and tactics to fight the alien invaders.

The show added several subplots that made the narrative more complex and convoluted  like Tom’s daughter somehow (i must have missed that part) becoming a half alien hybrid. The show also introduced the idea of the aliens wielding the ability of having technological mind control over some of their human opponents by attaching ungainly devices to their spinal columns that lit up when activated.

At the end of season 2, a new alien race known as the Volm are introduced. Led by a Volm nicknamed Cochise by Tom Mason, the Volm are another species who the Espheni conquered in their galactic expansion, and who want to destroy the Espheni in revenge. While more Volm forces arrive at the end of season 3, an attack on the Volm across the galaxy causes all but Cochise and a small team of Volm to abandon the Earth. Cochise and his soldiers continue to aid humanity in their war with the Espheni despite the lack of support from their superiors, notably Cochise’s father.

The series continues in this manner wit the Espheni getting the upper hand on occasion and causing setbacks in the human campaign against them making their situation increasingly desperate. Over all the show does a good job portraying the uphill struggle of being a part of an insurgency against superior forces, but in the end it takes a miracle, more or less to save them.

In season 5, Tom is rescued by the Espheni’s ancient enemy, the Dornia, who guide him into finding his inner warrior to defeat the Espheni once and for all. Returned to Earth, Tom rallies humanity into a global resistance that will march on major Espheni bases all over the world. Tom leads the militias in the United States in a march on the Espheni base in Washington, D.C. With the help of an Espheni communications device, humanity learns that the Espheni serve a previously-unknown queen who comes to planets when victory is assured and the Espheni are moving from invasion to occupation. Indeed, while in Washington, Tom spots signs of the Espheni moving in on Earth. Tracking the queen to the ruins of the Lincoln Memorial, Tom confronts her alone and she informs him of the true reason for the invasion. Tom manages to infect the Espheni Queen with a Dornia bioweapon, killing her and spreading the bioweapon throughout the Espheni species. The Espheni are destroyed and the Earth is freed. Months later, humanity is united and makes plans to elect a new leader. When Tom is offered the job, he refuses it.

Its the same old story, any species with a hive mentality doesn’t stand a chance against the human talent for making war. I hope you aliens out there are paying attention.