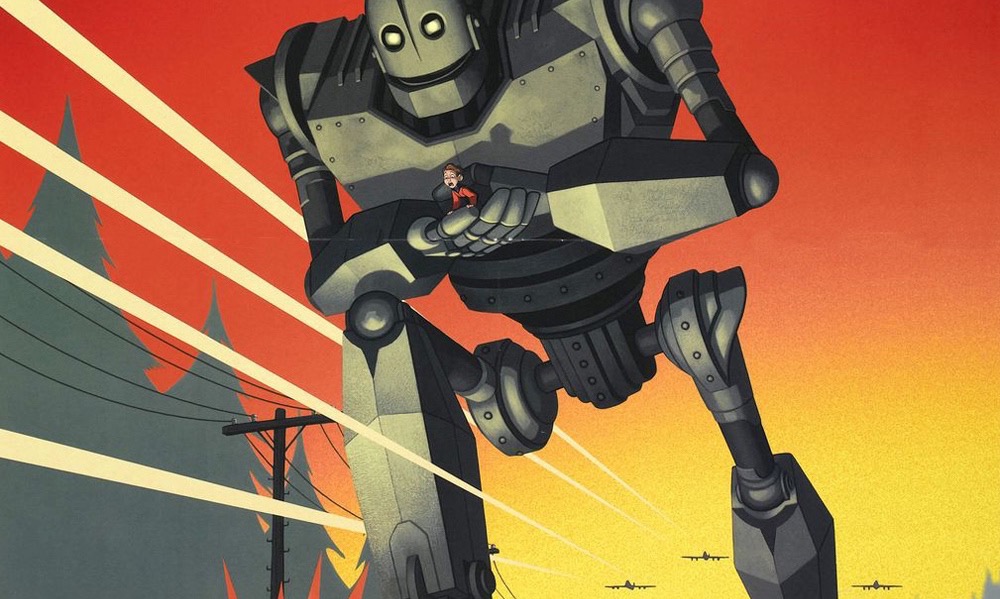 This timeless science fiction classic about an alien robot, built to be a WMD and the boy who befriends him is a wonderful story about the choices we make, and how they define us in becoming a better version of ourselves.

From the opening  depiction of outer space and Russia’s Sputnik satellite, Brad Bird’s depiction of Ted Hughes 1968 novel The Iron Man  is almost flawless from beginning to end. It rivals the work of the great Hayao Miyazaki which is a big deal; its an accomplishment seldom accomplished by western animation. They take their animation seriously in Japan, and Miyazaki is king. This film is a great tribute to the historical era it depicts. The year is 1957 and the film is resplendent with details that remind us of that period in American history. From the protagonist’s, Hogarth Hughes attire to the the wallpaper in his home, the bicycle he rides, and the activities he engages in. There are also some nice touches in the way characters in the film talk, and what they are watching on TV.

We are introduced to the alien contraption as it is revealed to a ship caught in a storm off the coast of Maine after crashing into the ocean.  It is the height of the cold war, a time of innocence and government induced fear of communist invasion and atomic war. The appearance of the massive metallic man reflects the popular art styles of the time, a combination of an art deco/postmodern industrial look. As the  story unfolds the Robot makes its way inland and the fisherman whose boat crashed into the titular character is relating his encounter to some of his peers at the small town’s diner, where he is overheard by young  Hogarth Hughes (Eli Marienthal) who is a typical child of the time. young, imaginative, and dreaming of adventure and encounters with visitors from outer space. Hogarth’s mom Annie Hughes (Jennifer Aniston) works at the diner as a waitress. Hogarth has captured a squirrel, and wants to convince his mom to let him keep it as  a pet. It gets lose which leads to an encounter and meeting with a local beatnik artist named Dean McCoppin (Harry Connick Jr) who owns a scrap yard where he makes sculptures out of the junk he collects. The movie wastes no time in setting the stage for what occurs next.

Meanwhile the metal goliath has made his way inland, and is leaving signs of his passage by tearing up some of the landscape and consuming any metallic objects he encounters. The gigantic visitor is hungry and metal is his choice of cuisine.

After he munches on Hoarth’s tv antenna and disrupts the kid’s movie watching, Hogarth’s mind is still dwelling on the conversation he overheard earlier, and the speculation about the fisherman’s encounter being about martians or visitations from other unearthly creatures. His imagination goes into high gear and he determines to go out into the woods seeking an up-close encounter with alien visitors. He leaves the house unguarded, door ajar, a reminder of those innocent days before we began locking our doors and windows against present day monsters that are all too human in nature.

Seeing the path of destruction in the forest the metal munching mammoth has left behind he follows the trail to the local power station where, to his amazement, he arrives just in time to witness the Iron Giant get electrocuted and tangled in the high tension wires of the place. He panics and runs from the nightmarish scene, but changes his mind and goes back to try to save the suffering giant by cutting the power. he succeeds and decides to take a closer look at the now sleeping colossus, but when the giant begins to show signs of life again he panics and runs from the scene where he encounters his mom who has returned home and gone searching for her missing son.

One thing leads to another as the story develops. Hogarth and the giant becomes friends after he encounters him again in the woods the next day. The Iron Giant (Vin Diesel) has apparently suffered some damage to his head and has a form of amnesia, but shows signs of intelligence and demonstrates he knows what Hogarth did for him and appreciates it. Hogarth begins teaching him how to speak, and adopts the mechanical marvel as a sort of younger brother/pet. He tries to leave with a promise of returning the next day, but the Robot insists on following him home. After an encounter with a train it is demonstrated the giant is modular in design and has the ability to repair and re-assemble it self.

This coincides with the arrival of a national security agent who has responded to report by the fisherman who first encountered  the robot. He is Kent Mansley (Christopher McDonald). Kent is cowardly bully of   a man with delusions of grandeur. A small minded, paranoid, and suspicious petty bureaucrat who is drunk on the small amount of power he has been given in his government ordained duties. He is not a likable man, and makes a suitable antagonist for the story.

Things come to a climax as Kent creeps closer to the truth and discovers more and more about the subject of his his investigation, but Hoagrth, Dean, and the giant continue to elude his search for the truth. Ironically the giant reveals himself when he arrives just in time to save the lives of of two children that have fallen from a balcony. When a chase ensues its revealed the giant can fly, but Hogarth is injured, and the military attacks. This triggers a response in the big guy that reveals he is an awesome weapon capable of massive destruction. The giant thinks Hogarth is dead and sets about to destroy the military that is attacking him, and possibly the entire town in the process too. Hogarth is not dead, and returns just in time to prevent things from reaching the point of no return.

However it may be too late, things have escalated to the point where the military is on the verge of launching an atomic bomb to deal with the perceived threat, and in an emotional moment, Kent gives the order to launch without  really thinking about what the results will be. After saying his goodbye to Hogarth, in a moment of heroic sacrifice, the Iron Giant launches into action to save the day by impacting the missile on the edges of outer space saving the town. The influence of Hogarth’s friendship and love for the alien device has saved the day.

This wonderful movie manages to end on a hopeful note when in an epilogue that takes place weeks later Hogarth gets a package in the mail. Its the only piece of his enormous friend found to survive its encounter with the missile. Later it is shown to come to life, activated by the giant’s signal to re-assmble, demonstrating the Iron Giant has survived and there is hope they will meet again.

This marvelous movie was remastered and an extended version with added scenes was re-released in theaters in 2015.