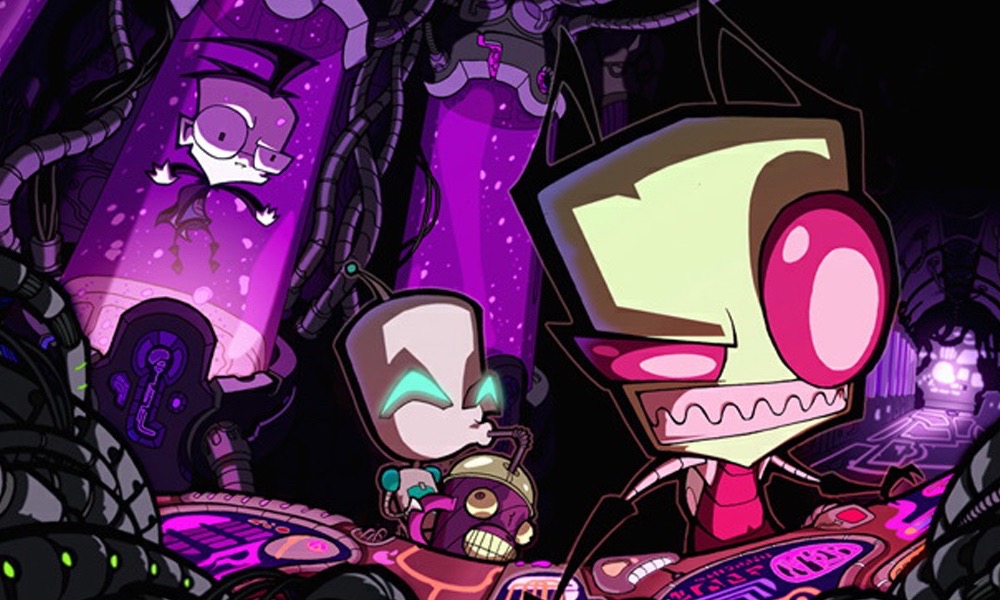 One of the most unusual, amusing, artistically interesting, and enjoyable animated science fiction series ever was on Nickelodeon from 2001-2002, sadly ending before season two was over.

Invader Zim was a genuinely funny series about an incompetent alien invader whose mission it is to conquer earth and enslave the population.  This pint sized invader from the planet Irk is accompanied by his malfunctioning robot companion/servant Gir who sometimes assumes the appearance of a dog (not very convincingly). This series is unorthodox in its styling and character design, beautifully rendered and unusual in its portrayal of the world, alien technology, spaceships, and everything else

Zim is a soldier for the aggressive planet Irk, which has plans to conquer and enslave the galaxy. Zim is not held in very high esteem by his peers, whose society is ruled by the tallest among them, and Zim is rather diminutive in size. The over-eager Zim has a history as a failed soldier which he can’t outlive, for his role in a previous plan with the same goals – Operation Impending Doom I, in which he went berserk with a giant robot suit and destroyed much of his home planet. Zim is not very bright.

The Irkians are now ready to mount Operation Impending Doom II, and are in the process of sending out “Invaders” –  scouts that are supposed to size up a potential enemy planet in preparation for invasion. When Zim shows up uninvited to the ritual choosing of Invaders, he pleads for an assignment, and he is given a nonexistent planet to invade, but ends up on earth which plays no role in the Irkians plans.

He arrives on earth and sets up a base disguised as an earth home, the depiction of this and other technology is nothing short of delightful. Zim decides to enter a local middle school as part of his disguise as a human being. Here he encounters an adversary in Dib, the son of a scientist, who is obsessed with the unusual, things like Bigfoot, and, you guessed it, alien invasion.  Dib is the only one who seems to notice there’s something unusual about Zim, and having overheard the Irkians on a special radio he owns the night before, is now convinced of the coming invasion. He is the only one who seems to notice Zim is not exactly normal in appearance and points it out to the class and teacher, who ignore him and chalk it up to him being weird. He is convinced of the truth however, and makes it his mission to find proof of Zim’s alien point of origin. Zim is green in color and no one seems to notice this obvious trait that marks him as not being from around here.

After the series was originally cancelled it was rebroadcast on Nicktoons with all 27 half hour (22 minutes) episodes intact. The series was created by Jhonen Vasquez and it is a real treat for both the visuals and the unusual approach to a very amusing take on the alien invasion story. The technology, and for that matter everything portrayed is imaginative, very cool, unique, and a lot of fun. This series has a lot to recommend it, and is well worth checking out.