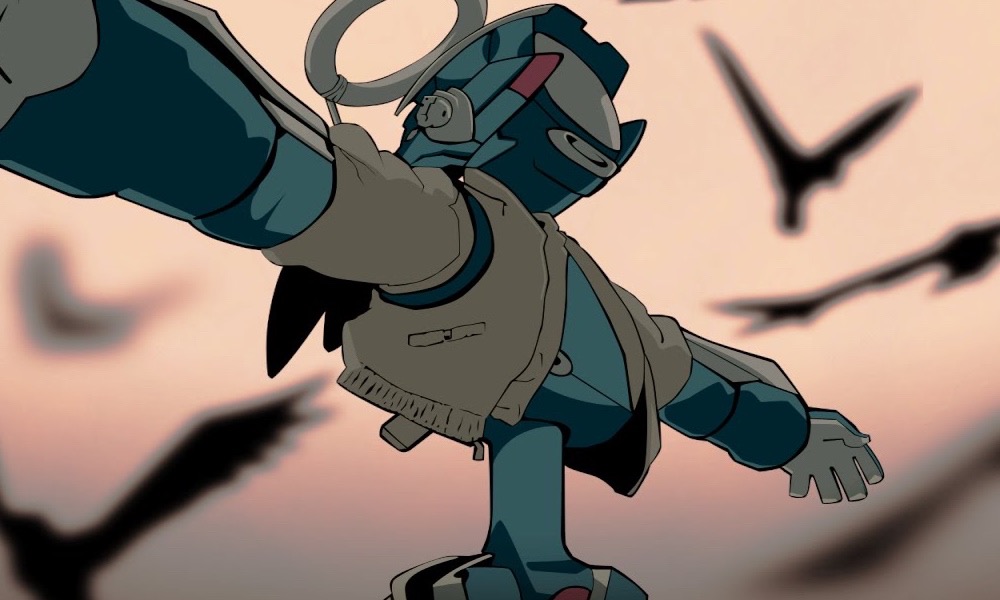 FLCL (Japanese: フリク) Furi Kuri?, pronounced in English as Fooly Cooly) is an original video animation (OVA) anime series written by Yōji Enokido, directed by Kazuya Tsurumaki and produced by the FLCL Production Committee, which consisted of Gainax, Production I.G, and King Records. FLCL follows Naota Nandaba, a twelve-year-old boy living in the fictional Japanese suburb of Mabase, and his interactions with Haruko Haruhara, who arrives in the quiet suburb, drawn by the industrial town houses and the Medical Mechanica building.

The six-episode series was released in Japan from April 2000 to March 2001. A manga and novel were also created at the time. It aired in the United States on Adult Swim in 2003 several times. It aired once again on the network’s Toonami block from October 26, 2013 to January 25, 2014.

FLCL first aired on Japanese television in 2000 and ran for only six episodes. The small number of episodes was intentional, but the series still developed a cult following and was acclaimed as one of the most imaginative and inventive anime series ever released.

The story and art work are both remarkable in this extraordinary series. Utilizing several styles and techniques, including a brief visual tip of the hat to Southpark, the art work is atypical for anime and stands out as both remarkably beautiful and suitable for a production of this type. The series is also memorable for the surreal story it tells. This series adds a new dimension to what is possible with animation as a medium.

At its foundation it appears to be a coming of age story about its main character, 12 year old Naota Nandaba, who like many kids at that age regularly complains that nothing interesting ever happens in the small town he lives in, while exraordinary things are occurring around him all the time, but because of his youth he’s just too obtuse to realize and appreciate it. Naota is a very grumpy and grouchy preteen by nature it seems.

Be careful what you wish for seems to be the lesson here, as his life undergoes some remarkable changes with the arrival of Haruko Haruhara, a Rickenbacker bass slinging, Vespa riding young woman who turns his life upside down from the moment they meet.

They meet on a bridge when Haruko, either intentionally, or accidentally, as it appears hits him with the scooter she is driving and knocks him out cold. Examining him, she’s convinced he’s dead, but performs CPR on him, much to the chagrin of Mamimi Samejima, a girl who Naota spends time with, and a friend  who obviously has great deal of affection for him. She thinks of him as hers alone, and when Haruko gives him a kiss as part of the CPR, she can’t believe her eyes and is quite upset about it when it takes place

After reviving him, Haruko does something even more remarkable, she picks up her electric bass guitar and bashes Naota in the head with it, leaving him with a sizable lump that later proves to have some unusual properties. It doesn’t look like an ordinary lump produced in the fashion it was, it looks more like a horn and has some geometric qualities also.

When Naota returns home after his misadventure, he’s very unpleasantly surprised to find Haruko there. It turns out she also ran into Naota’s widowed father he lives with, who hired her as a housekeeper. This mysterious, bizarre woman has managed to integrate herself into his life and his home as well. It turns out she will also be sharing his room. This is when things start to get really weird.

Later  when his injury starts to cause Naota an unusual amount of pain, it proves to be even more extraordinary when a full sized humanoid robot with a tv for a head springs out of it, and takes up residence in Naota’s home. That’s part of what makes this series so surreal, no one else seems to notice how very odd it is that this extremely abnormal woman and a robot that sprang from his forehead have taken up residence in  his home except Naota. His father and grandfather actually seem to be embracing these extraordinary events and developments as normal.

That’s just how the story begins in this very unusual series with some of the most beautiful, unorthodox, unusual art work in an anime production I have ever seen. The series also has a great soundtrack, and the end credits  of each episode are worth watching it for alone. If you haven’t seen it, you’re missing out on something extraordinary, and well worth a watch. I highly recommend it.

Two new seasons totaling 12 episodes were announced on March 24, 2016 as a co-production between Production I.G and Adult Swim. Now, 16 years later, Adult Swim has announced that it is working together with Production I.G, as well as FLCL’s original character designer Yoshiyuki Sadamoto and director Kazuma Tsurumaki, to develop a second and third season for the series, each running with the same number of episodes as the first. The seasons are timed to air sometime in late 2017 or early 2018. Happy viewing.