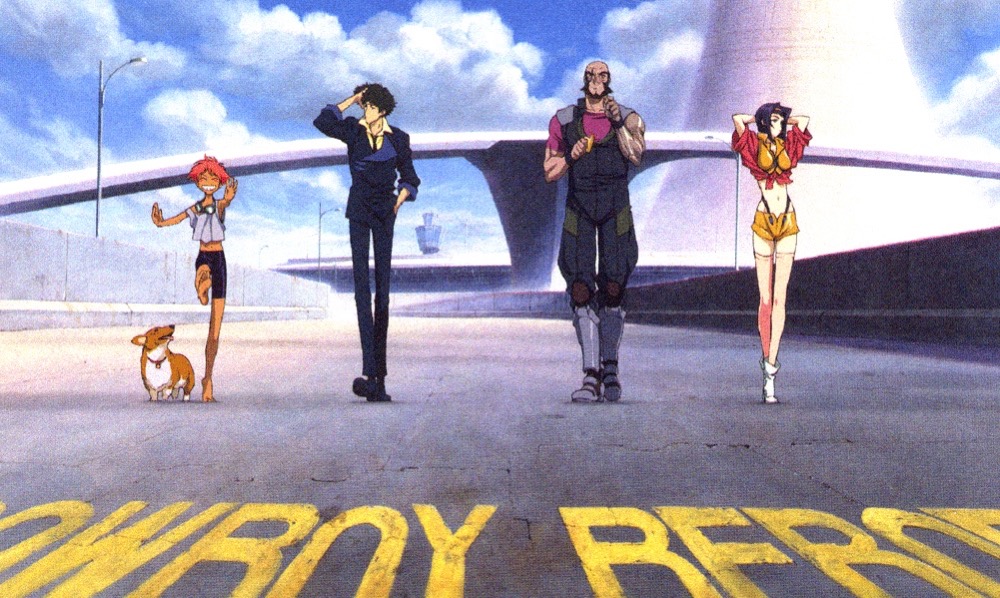 This outstanding action-adventure series set in the future of outer space is considered by many to be the best anime series ever.

This series is unique. From the moment the opening credits begin against the blare of  composer Yoko Kanno’s  brassy American-style jazz soundtrack, you know you’re in for something special and different.

The stories and characters are jazz-like in their own way too, with the plots more like riffs on a theme that flows with the improvisational skills of a masterful musician playing the interesting and odd collection of characters like instruments in an improv jazz band. The series is set in the year 2071 roughly sixty years after a jump-gate accident leaves Earth uninhabitable  and humanity has colonized most of the moons and planets of the solar system. Amid a rising crime rate, the Inter Solar System Police (ISSP) set up a legalized contract system, in which registered bounty hunters (also referred to as “Cowboys”) chase criminals and bring them in alive in return for a reward. Announcements of jobs are broadcast on interplanetary television and these amusing announcements with a touch of fan service in the form of the female announcer, are a regular part of the show.

The crew of the Cowboy Bebop  is a buch of misfits seemingly thrown together by fate. There’s Spike Spiegel, young, often lethargic, impulsive, with skills in martial arts, weapons, and as a pilot, with a dark, gangster related ( a former hitman for Red Dragon Syndicate), and troubled past that eventually catches up with him. In some ways Spike is almost like a futuristic James Bond, usually neatly attired, and sophisticated, and like Bond he often leaves a path of destruction in his wake. Spike has his own space ship, a smaller fighter-style ship named the  Swordfish II.

In sharp contrast is  the older Jet, a still-tough world weary former cop for the ISSP. He is usually more casually attired and equipped with a bionic arm. He is the kind hearted owner of the  spaceship Bebop, the series is named for, who more or less adopts Spike. They become partners as bounty hunters catching wanted criminals for the reward money so they can pay expenses and eat. Unfortunately Spike’s exploits usually eat up the profits because of all the damage he causes carrying out his jobs

They are soon joined by the beautiful Faye Valentine, a thief, and opportunistic, possibly amoral, con artist who uses her allure to get what she wants. She joins the guys after she is caught in one of her scams and they rescue her from a fate worse than death. More additions to this oddball “crew” arrive in the form of Ein a corgi rescued and adopted as the result of  a case, and Edward Wong an orphan initially thought to be a young man but later discovered to be of the feminine persuasion. Ed is carefree, highly eccentric, and has mad computer skills. This crew of misfits are involved in varying degrees with a series of mysteries and adventures that for the most part center around Spike and his experiences carrying out his attempts to catch criminals, or having to do with his criminal past.

The cases are are an oddball assortment also, from drug smuggling to interplanetary terrorism. The series is never boring as it plays with a full spectrum of approaches telling the stories in ways that are sometimes highly amusing, and sometimes darkly grim in its portrayal of Spike’s and the crew’s experiences, with plenty of action and adventure in the mix. The show also has a welcome touch of noir in its DNA, and that sums up the the show well in its uniqueness: It’s an unorthodox mix of westerns, film noir, and outer space action/adventure set in the future. What’s not to like?

This is not a kids show with adult themes existentialistic in nature and  graphic portrayals of violence and death. It ends on a gloomy note with Spike in a final showdown with his former nemesis named Vicious from his past life as a gangster. Karma’s a bitch, and Spike’s determination to face his foe costs him dearly. As often happens in Japanese story telling, there is no happy ending. It is instead, melancholy and sad.