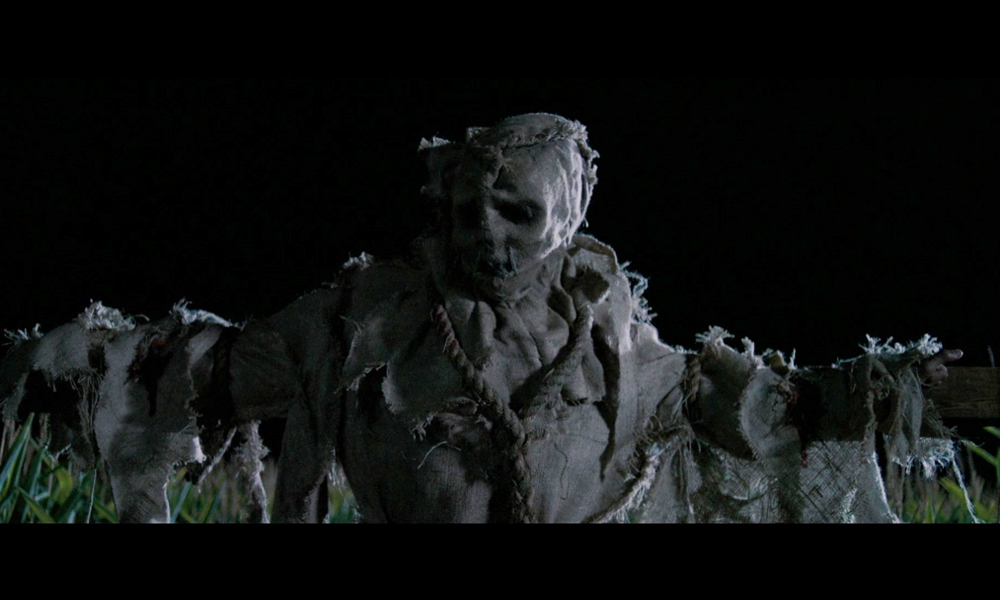 Ely and friends come to regret this wrong observation. Before being attacked by a crazed farmer intent on turning them into human scarecrows, Ely (Umed Amin) his friend Farbsie (Mike Taylor), their two female companions Ash (Hannah Gordon) and Devon (Maaor Ziv) were out looking for a place to swim. 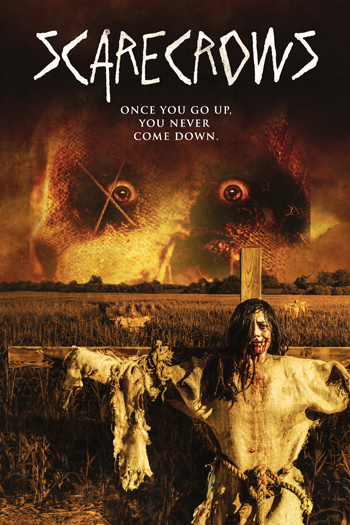 I usually expect movies like Scarecrows to be campy, overacted and to contain dialogue that makes you think the script was written by middle schoolers sitting in a hazy fog watching a stack of horror movies trying to steal and rewrite their favorite scenes and scenarios into a script. Scarecrows however, didn’t always have that low budget, ‘wouldn’t it be cool if,’ haze other movies sometimes have.

The actors for the most parts played their character well. The weaknesses being found in the script and not the acting. Though the script was not too shabby either.

Some of the dialogue was stupid and idiotic. But, at times believable, teens aren’t incredibly bright and can be profoundly stupid, which some of the dialogue highlights. Twice characters come across severed fingers and both times they just seem to be grossed out rather than horrified. They’re out in the middle of farm country, obviously in a strange place, to them, and they’re completely nonplussed about severed fingers, but go about like nothing out of the ordinary happened, with no fear that these free roaming digits might belong to murder victims or have sinister origins.

I realize stupidity in the face of horrible circumstances is a trope of the horror genre, but it is one that should die like one of the genre’s teen sluts naked, out of breath and tired -decapitated and left for her best friend to trip over later.

I think this might be one reason why I don’t like horror movies. If the characters don’t act in logical ways or in some sort of frenzied panic that might explain away their irrational acts, I lose sympathy for the plight of the characters start rooting for the villains and killers of these teenage idiots.

Speaking of killers, bizarre scripting decisions and character motivations, in this film the villain is introduced within fifteen minutes of the start of the movie and his objective to make scarecrows of people is put right out there as he’s hunting an escaped scarecrow in his field.

The farmer and grim task gives the audience a taste of what is in store for our band of skinny dipping city slicker teenagers. Great foreshadowing of things to come, but a counterpoint to the farmer is his son. A character who shows up fifty-four minutes into the film and is the source of a cheap jump scare and, some of the worst motivations and acting in this movie.

The farmer’s son tries to warn off Ash who is being hunted by the farmer. The son character comes right out of left field and tells her he’s been watching her and her the others since they arrived. He explains what his father is doing. He’s an obvious exposition dump and there to do his job and die.

I think had this character shown up earlier in the movie and been seen watching the kids or with his father, his sudden introduction at two thirds into the movie might have felt a little more natural. But he shows up and comes so far out of left field, it feels forced and it yanked my attention clear out of the movie. The moment he had shown up, I was interested in the story, maybe even caught up a little in it as the tension had risen, but one little arm grab and him opening his mouth and I was irritated.

Anyway, I did enjoy some bits of the movie. The soundtrack was decent. It got in the way a little bit, making me think I was watching a CW teen drama with overdone musical cues, although it was used to good effect in one moment where the music stops and starts.

Again, the actors were entertaining. The blood and gore was minimal, I found myself wanting more. These kids don’t start getting picked off until the film is almost half way through and their tribulations are for the most part too short.

You may like it more than I did, it’s worth a peek.