Running with the Devil – movie review

The CEO of an International conglomerate sends two of his most regarded executives to investigate why shipments of cocaine are being hijacked and over cut somewhere on the supply chain. 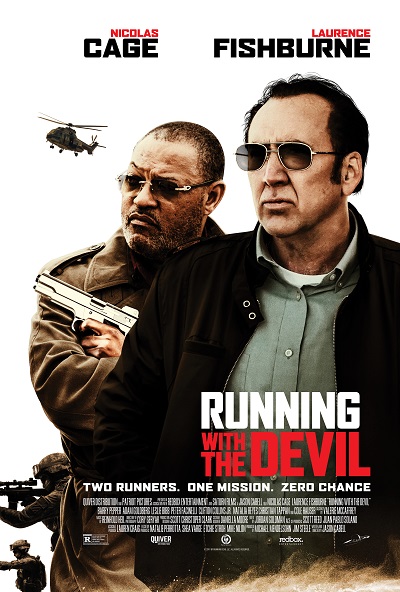 Running with the Devil is a thriller starring Nicholas Cage as The Cook and Laurence Fishburne as the Man. Two men connected to the long supply chain of drug runners to the supply of cocaine that makes its way into Canada. Leslie Bibb plays the Agent in Charge whose sister dies from a drug overdose. Barry Pepper plays the Boss in charge of the cartel whose drug supply is being disrupted. Clifton Collins Jr. plays the poor farmer who grows, processes and is in charge of the initial delivery of supply. Cole Hauser plays the Executioner who executes.

Is that bit of information a bit too much to absorb and follow? Well, that is how Running with the Devil plays out.

The movie follows jumps between a number of people throughout who are given titles and not real names as names are not important as these characters last a couple of scenes at the most and those scenes are too brief to get attached and jump back and forth between other characters and settings.

The main characters The Cook, The Executioner, The Man and The Agent in Charge are followed throughout, but they also suffer in that there is no depth to them, they’re quick in dialogue and action as we are not given time to let their story simmer or sink in as we’re yanked away to different action somewhere else.

If anything, this method of storytelling seems to be as frenetic as a drug addict after they’ve done a line of coke.

The story is okay, and despite the almost uncontrolled nature of cuts and takes, not hard to follow story wise, but some of the decisions on what to show could be head scratching. There are moments where we see a bit into the personal lives of The Man and The Cook, but their family are on screen, maybe a total of three minutes, combined and never seen or heard from again.

The Farmer, whose wife we follow as she takes her kids to school and has a conversation with the headmistress (I assume that who she is) about a late tuition payment and if she could please have the kids ready to pick up so they can help their mother farm, that was intriguing and had some depth and seemed to flesh out the farmer and his family’s plight.

The Man on the other hand, I get it, The Man has a daughter and he’s not a very good dad. I could have guessed that from the fact that he loves his blow and dry humping hookers.

Yeah, there’s a scene with Laurence Fishburne what appears to be dry humping some hookers. It’s quite a hilarious scene if you catch it, because I believe the intention was that he was having sex with these fully clothed hookers, whilst he himself doesn’t take off or even appear to unleash his man beast from his boxers, but just walks up behind them and grinds away like an animal in heat.

This doesn’t mean I want to see Mr. Fishburne’s backside, because we do, or a body double’s backside during a couple scenes in the movie, but the image of him grinding away in his boxers against a couple ladies who themselves don’t appear to be ready to receive any man package, was just delightful in it’s idiocy of trying to get us to believe something more was going on.

Had it happened only once on screen it would have been forgivable, but he does it several times. Then, later in the movie there is another couple of characters who also seem to be having a wild night of dry humping.

There’s no mystery to this movie, except perhaps to exactly how things are going to play out, but the audience isn’t really left with any mystery. We know The Man is cutting the drugs and it’s killing people, in what is the cleanest case of overdosing ever put to film. People seem to die peacefully and at rest with no signs of violent thrashing or vomiting.

You don’t need to vomit or thrash if you die of an overdose, but you’d think somebody who died sitting in a chair would at least flop over or his head would drop.

There is no mystery to The Cook figuring out what was going on all along. There’s a moment where you wonder if The Man will get away with it, but then you remember that, no, it’s not like. No, the big mystery for me was whether the farmer would be able to survive long enough to pay off the private school tuition for his children and whether he and his family can make it

That is a question you’ll have to have answered by watching the movie.

This movie has some problems, but the movie was ok. Like a “C “ level of okay . It’s watchable, but you very likely would never want to watch it again unless you forgot what it’s about, which you are, and then when you remember you might watch long enough to watch some dry humping and then turn it off after you stop laughing.

Watch at your own risk.